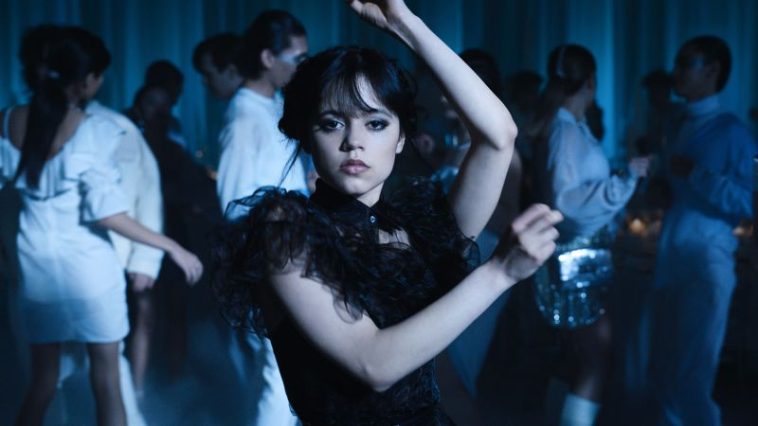 The dance scene from Netflix’s “Wednesday” quickly became iconic and inspired millions of copycats on TikTok. Here’s what gives the peculiar routine its supernatural staying power.

Another thing the “Wednesday” dance has on its side – the human tendency to learn a dance for social currency.

Think of the “Electric Slide,” “Macarena,” “Cupid Shuffle” – standards at bat mitzvahs and weddings, moves many of us know so well we can perform them without thinking. Performing them en masse at an event like that might feel like a Pavlovian response to a DJ’s song choice, but it’s also a shared ritual that fosters “a sense of solidarity and belonging,” Drenten said.

“Every gesture and movement enables the person performing it to inherently say, ‘I get it, I’m in the know, we have this shared experience,’” Drenten said.

That’s part of the reason why dance routines, from “Renegade” to Lizzo’s “About Damn Time,” so often dominate TikTok. But unlike those trends, the “Wednesday” dance wasn’t set to a popular song, although The Cramps’ punk anthem “Goo Goo Muck” has since earned some new fans. The moves were easy enough to pick up, Drenten said, “straightforward but unique.”

But it took Lady Gaga to take the “Wednesday” dance stratospheric. The version that’s gone über-viral on TikTok is a “fancam” of sorts, or a mashup of clips, set fittingly to Gaga’s “Bloody Mary,” a Biblical ode to dancing uninhibitedly

(I haven’t seen this, but I can imagine the slight against the David story – why is nothing ever original with these mockers?} Even Mother Monster herself performed a version of the “Wednesday” dance, wearing two long braids.

Dancing is a LANGUAGE, just like English, i wish i could find a reference that lectures about symbolism in dance and body movements.
I read somewhere that YOGA as a set of movements is an invitation ritual to Hindu gods to have your body, and soul, maybe the media is making this dance viral for something similar.
I think Adams Family are like the Wizard of Oz, an initiation material. The darkness it comes out of it is mind blowing.
Look at the picture i took, there is no need for any colour inversion or mirroring to see who is behind the scene. 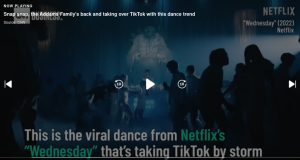 Dancing is a form of prayer. It is your soul and spirit manifesting deepest feelings through movement. It is powerful, like song, like poetry and forceful speech. It is an inward cry manifesting in outward expression. A painting of desires, fears, outcomes and of hope. A tying together of mind, will and emotions into the total expression that is us, into a singleness that is sent up with great force, a bonding of wills. We know it is not just a mindless entertainment.
We must all be cautious what we send up. Don’t just mirror another.

I have never liked The Addams Family very much. And this scene just reminds me of a million goth girls I saw back in the day. I guess it’s been long enough it looks new ro a lot of people.

This is so ugly and pretentious…The real dance is when you are with your friends in rave party and feel that massive rhythms and sounds of detroit techno/dub/electro/house/trance from 90s and early 00s in your whole body so you move your a*s naturally along with the crowd of strangers and you’re happy and feel the joy of togetherness – that is the point of dance …Todays “music” is just a big pile of sh*t and young people don’t know what the real dance is about. They just gape at their @ssphones and live in virtual hell of surveillance apps and antisocial networks.

Also there ist a scene where blood ist raining. Wednesday seems to Like it and liks her Finger covered in blood.
Reference to blood Loving elites