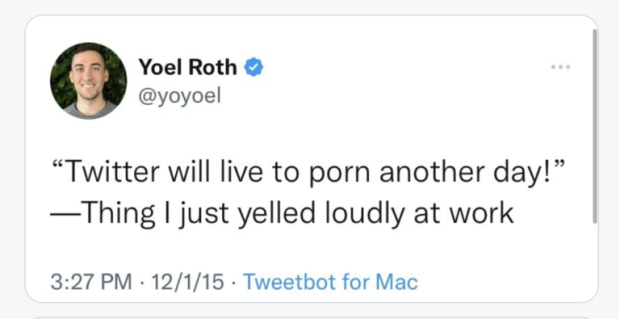 Twitter execs were regularly meeting with FBI over what to censor. Twitter’s censorship was almost 100% aligned with the Dem Party. Twitter’s chief censors were deranged ideologues abusing their power over our discourse to silence dissent. —Glenn Greenwald Startling fact of the week: Twitter’s senior ranks of content moderators included over a dozen former FBI and CIA agents and analysts who let child p**n run loose all over the app while surgically removing any utterance contradicting the government’s claim that mRNA “vaccines” are “safe and effective” — not to mention the effort this elite crew expended against anyone objecting to … Continue reading →

Paints Elon as savior:
“Elon Musk, alone, apart from, and in defiance of all the cowards running things in America —the corporate sell-outs, the craven college presidents, the bought-off politicians, the bad-faith media fabulists, the vindictive denizens of Hollywood — is moving to inject some therapeutic truth into the American lunatic asylum. He came out pretty hot over the weekend, branding Dr. Anthony Fauci as a criminal, calling for his prosecution, and promising the release of Twitter files that will demonstrate just how deceitfully the old Twitter acted in all the medical melodrama surrounding Covid-19 and the “vaccines.” On Sunday, Elon tweeted, “Now things get spicy.” Will the reveal of all that wickedness make any impression on half the people of this country still deranged by the many previous salvos of official propaganda? Maybe not all of them. Maybe only twenty percent. But that should be enough to tip the consensus of opinion in the right direction: a recognition of the harm that has been done… and the will to quit doing more of it.
Beyond that, even, Elon has put the basic question to America: Are you in favor of free speech or not? Especially now that you know that “moderating” free speech is an invitation to live in lies. And lying all the time really does bend that old arc of history toward evil.”