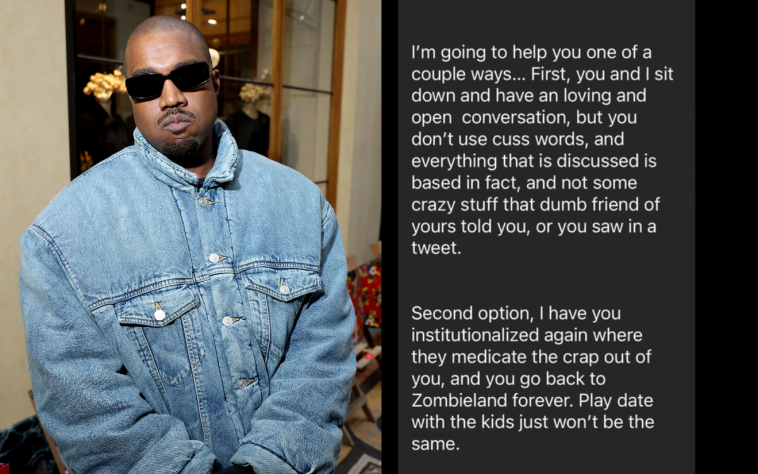 Kanye West just went on Twitter to admit that he was drugged in order to be “manageable.” He then shows a screenshot of the text messages between him and someone named “Harley” – who users speculate to be Harley Pasternak, a popular celebrity trainer(handler imo)

Absolutely everyone on this site needs to read this. You want concrete evidence of mind control in the entertainment industry? Look no further.

they operate this secretly but somehow carelessly text something to expose it all? dont know about stuff like this

This was a fascinating read. I love Kanye, but the way he’s trying to shed light needs to be delivered differently. The way he’s delivering can easily be construed as hateful and awful. However, these screen grabs open up a different conversation, but he has to stop generalizing to an entire population. The people pulling strings don’t practice Judaism, it’s an inverted faith having nothing to do with the warmth and beauty of Jewish traditions. Rothschilds aren’t Jewish, etc…. Ye has to know this. He’s smart, but some of his stunts lately I can’t get behind. That text from his handler, though, is BANANAS. THAT’S what people need to be opened up to. Drop the generalization to an entire population and focus on that text, help the population pull the strings from there.

We all know there are still decent Jewish people out there. My sisters boyfriend is part Jewish through his dad and he and his brother are good friends of mine. The book of revelation mentions these inverted Jews who do a lot of Satans dirty work in the entertainment business. They even tried to claim the verse as hate speech. But for Kanye I don’t trust him. I feel he is still under control and they are making it look like he speaking out.

The fact you view Kanye’s brave and righteous war against the killers of Christ as “hateful and awful” is only proof of your own mind control.

Mind control has different levels: some are very invasive and extreme, such as physical torture, forced drugging, direct hypnosis, etc; but the far more common type is mass mind control through information control: deletion or corruption of the publicly available knowledge base. I would say “mass media” but it’s so much more than that. It’s children’s education through the highest levels of academia, and the entire historical record.

Judaism is not benign. The Talmud is not something which warrants respect. Do you believe that all of non-Jewish humanity is comprised of soulless, sub-human animals created by God to serve as a slave class for Jews (see the term “goyim”)? If not, then you have a problem with Judaism. It is an inherently racially-supremacist religion which believes to be “chosen” stems from genetic lineage, not repentance to God. There is no salvation in Judaism. You cannot obtain Israeli citizenship unless you are GENETICALLY Jewish. It is the last explicit ethno-state. There’s so much more that can be said, but just with what I’ve brought up here, it should be clear that Ye is spot on in his assessment. The United States is controlled by a dangerous and criminal Jewish mafia. There is no answer to any of the many problems we face today without acknowledging that. The only way out is through.

(It should go without saying, but I know many people still need this explicitly stated: no, this doesn’t mean that every single individual Jew is evil or deserving of persecution. I understand speech like this makes many of them uncomfortable but it is ABSOLUTELY NECESSARY. Truly righteous ethnically Jewish people will not deny any of this.)

I agree but I don’t love Kanye lol His handler in the text is publicly Jewish(but privately these handlers are all dark occultists) and it’s a fact that the majority of Hollywoods producers whether it’s music,acting etc are publicly Jewish.(There’s actually a good book called “An Empire of their Own: How the Jews Invented Hollywood” which goes into a lot of detail about how the industry came about. In a nutshell, they were escaping not only persecution out East but also Edison’s film company, and it was just a place to build from scratch. All but one of the major film studios started were Jewish run, and because of that, it was a much friendlier atmosphere to these Jewish people than the rest of the US.) I would bet Kanye’s list of Jews he personally knows have abused him in the industry most his life and he is trying to say something not knowing that these Jews are not Jewish and absolutely do not speak for the Jewish majority on the planet…Or what he is doing is part of something we are unaware of at this time,that he is playing a role,reading a script given to him by his handlers. Time will tell.

Describing the hierarchy of rulers and ancient bloodlines takes high sophistication. It’s a complicated topic with a lot of facts occulted. If they don’t kill him off, he’ll become more articulate on the mattter with time. Maybe he can team up with David Icke or Mark Passio or Michael Tsarion and write some songs with somebody who has spent years researching the deets.

Sick. Just that one message alone is so narcissistic and just horrid. I pray that these people get OUT and yes, if the movie GET OUT was written about Kanye or people like him, then yes, they need to GET OUT) fully out of fame, fully out of the spotlight, fully out of the people using them. Easier said than done but fully OUT.