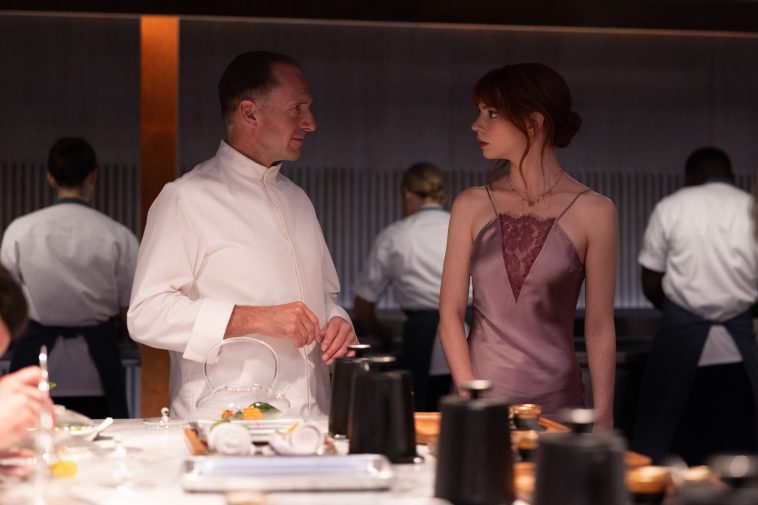 One of the biggest crowdpleasers of the Toronto International Film Festival has arrived. “The Menu,” a high-class horror comedy written by Seth Reiss and Will Tracy and directed by Mark…

Here is a screenplay synopsis for anyone interested: http://scriptshadow.net/screenplay-review-the-menu/

A few of the most telling quotes from this fawning site:

“Course 4 is where things get really f$#%d though. That’s when Chef Slowik introduces his sous chef, who he tells a long sad story about, and at the end of the story, the sous chef pulls a hidden gun out of his pants and blows his own brains out. It is at this moment that everyone realizes tonight is not going to end well. One of the older customers tries to leave but gets his hand chopped off. The message is clear. Everyone stays until the end of the meal.”

“And the dialogue. Wow. The key was they created a dialogue-friendly character at the center of the story in Chef Slowik. He comes out and gives a story before every course is served and they’re all weird and wonderful and psychotic. “Jeremy is talented. He’s good. But he’s not great. And quite frankly, he will never be great. He so desperately wants my job, my position, my prestige. Isn’t that right, Jeremy?” “Yes, chef.” “But Jeremy has forsaken everything to achieve that. He works here 20 hours a day. He has no time for friends. No time for family. He can’t go to the gym. Or to see a movie. He can’t even go to the bank because it’s only open when he’s working. Jeremy, when’s the last time you talked to your mother?” “I don’t remember, chef.”

“And two, there comes a moment in the script where people are either going to eagerly stay on for the rest of the ride or hop off. That moment is when the Chef makes it clear that everyone is going to die tonight. And there are still three courses left when he announces this. I know they’re on an island. But I would at least try to escape. And yet outside of a weak attempt by one of the customers, everyone else accepts their fate.”

From the original article: “The starry Saturday night crowd was eager to take the wild ride, with actors such as Eddie Redmayne and Charles Dance applauding at the film’s end.”

A E
Reply to  Hope

It’s uppercrust cannibalism and drew an extended standing ovation. The high society attending were to be on the “after menu”.