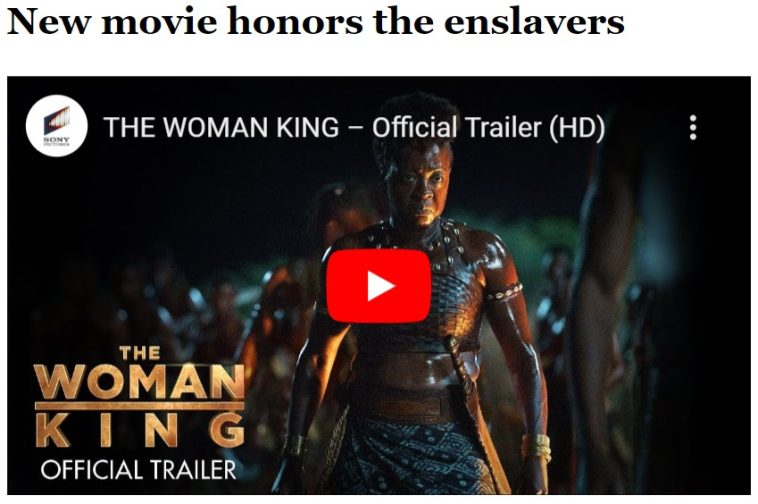 The problem with the movie is they were not really fighting to protect their country. They were capturing slaves, which Dahomey sold. Most were shipped to Brazil, the Caribbean and other nations on the other side of the Atlantic.

The women warriors were pretty awesome, according to Meilan Solly, the associate editor of history at Smithsonian magazine.

Solly wrote, “At its height in the 1840s, the West African kingdom of Dahomey boasted an army so fierce that its enemies spoke of its ‘prodigious bravery.’ This 6,000-strong force, known as the Agojie, raided villages under cover of darkness, took captives and slashed off resisters’ heads to return to their king as trophies of war. Through these actions, the Agoije established Dahomey’s preeminence over neighboring kingdoms and became known by European visitors as Amazons due to their similarities to the warrior women of Greek myth.”

By captives, she means slaves.

The world needs more women leaders…sweet, demure, kind souls who lead with only grace and beneficence……?

Personally, I think some women can be as cold, if not moreso than men. For men, sometimes the emotional costs fly over their heads. For women who’ve gone this extreme route, they can feel the cost, calculate it, and decide it’s acceptable if it benefits them.  That’s another level of cruelty.

The first trailer for this movie was out only a short time. It was extremely violent showing these female warriors slicing the necks of at least 5 white men. I doubt all those neck slashings are even in the movie they like to put impactful stuff in trailers that never even appear in the movie.
Not only is it historically inaccurate but also virtue signaling to the Nth degree that black women ought to hate and want to kill white men.

Very racist, and I don’t see any group standing up for justice here in outrage. They want to castrate white males so they will feel they cannot fight back while making blacks feel they should go around causing atrocities. All so they can splinter us into groups for the slave takeover of the globalist corporate scum. There was much less racism in the 80s and 90s and they were even pushing the culture into everyone then.

That or they want to change the narrative/history and continue to perpetuate the image of Angry Black Women. It’s pretty dire whichever way you look at this movie.

Yes, I am noticing a split in black people around me. Some look angrier at me and others with more kindness. Some recognize the race bating and others are falling for it hard. I find I am quickly trying to evaluate every person I come into contact with quickly to determine where they are mentally. I see quite a few raging angry people and make a wide birth around.

They can be two faced as hell. My mom is a racist and she admits she loves it. Was completely programmed by the media since she wasn’t like this before. But then when she talks to her employees or our neighbors she is the nicest person.

That’s sad. And you’re totally cool, it just shows they could have seen past that too, they genetically had potential but were too suckered in. My parents watch TV nonstop too, it’s not that they are bad people they are just being badly programmed 🙁 though they could be worse and start marching.

Your mom sounds challenging to be around. Like Marie said you are much different so I imagine you just shaking your head a lot

A E
Reply to  art guerrilla

They’re all ACTORS now! Sling your bits and let’s get on wif all the mayhem. We’re not meant to think, here, have another scoop of white sugar and snort this pile of pretty, pretty snow!
(Read this as narrated by Russell Brand and you’ll see the wisdom.)

We wuz kangs. Regarding the first 45 seconds of the trailer.

2 seconds in – Oh, it is set in Africa. That’s new I guess. You usually only see crappy YouTube videos come out of the area. Maybe they’ll do something cool.

8 seconds in – Evil white men are coming to rape and steal. Better get our super-woman warriors on it.

Bleh. 10 million views already for this race bating propaganda. Totally disregarding the local population at the time’s willingness to sell their own people. (who knows, that story could be fake too.)

The enemy isn’t white people. It’s the same Satanic cabal of dark occultists who own everything today, including Sony Picture Entertainment.

Just more fuel to the derivative, globalist agenda to keep us at one another’s throats while they pillage the public coffers. *Sigh*

Probably written by AI in its attemp to further divide humanity. Like it has over and over again for millennium.