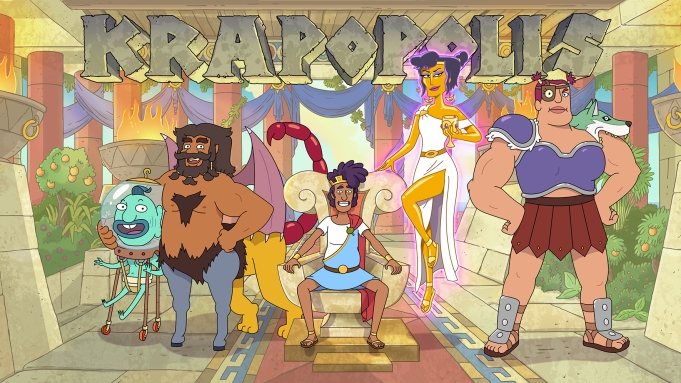 “Set in mythical Ancient Greece, the series centers on a flawed family of humans, gods and monsters that tries to run one of the world’s first cities without killing each other. Tyrannis, the mortal son of a goddess, is the benevolent king of Krapopolis and is trying to survive in a city that lives up to its name. Deliria is Tyrannis’ mother, goddess of self-destruction and questionable choices. Within her extended Olympian family — forged in patricide and infidelity — she’s known as the trashy one. Shlub, Tyrannis’ father, is oversexed and underemployed and claims to be an artist and has literally never paid for anything, in any sense of the word, for his entire life. Stupendous is Tyrannis’ half-sister, daughter of Deliria and a cyclops. Hippocampus is Tyrannis’ half-brother, the offspring of Shlub and a mermaid, and, obviously, a hot mess, biologically speaking.”

Well Dan Harmon is a known pedophile. They’ve tried real hard to explain it away. But it is what it is. People are so desperate to have entertainment carry them away from reality that they don’t even care if monsters are writing the stories. ALL tv is garbage.

Yes. I saw a twisted skit he made of himself mimicking the rape of a baby.

You guys notice the blacked out eyes thing is really all over the place in animation?