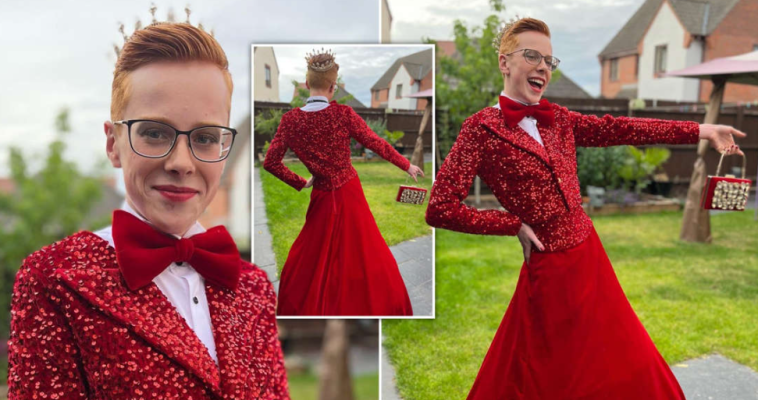 That smug, arrogant look that all of these deviants have is always sickening to me. This is child abuse and neglect, inverted into stellar parenting.

In the day of the internet, it is actually global news and not just national. As if I don’t have enough going on where I live, I’m now supposed to care about something that happens thousands of miles away. This is all part of globalism since the media wants us to sacrifice nationalism and become global citizens of the communist one world government.

Sence the woke culture ended circus..we still have to see the sideshow

This makes my soul sad…..

It’s not hurting anyone, some people (gays) can be wholesome with values, at least he’s not on a leash or talking about lube, just calm down.

It’s not a question of “does the boy have a right to wear a skirt and tiara to the prom” ~ it’s a question of “why is this important national news?” The constant shoving down our throats, incredibly disproportionately, of this cultural trend is irksome and exhausting and unnecessary. At best.

Frankly, I agree with you. This kid had their cake and is eating it, too. It’s just another piece of content for people to gobble up and forget with the rest of their online feed. At least there weren’t any giant d****s à la Christina Aguilera’s pride showing.

Now, the overreaction of others here regarding a bit of entertainment fluff from a mainstream rag bothers me. “Child abuse”? Really?? Let him without sin cast the first stone!

Casting the first stone isn’t just a metaphor, it refers to a death sentence. One of the reasons the Jewish people cast stones 2,000 years ago, was to kill someone who had been caught in the act of adultery. Jesus stopped the men who were about to kill an adulterous woman by saying, “He who is without sin, cast the first stone.” They all left because they were convicted of their own sins. However, while Christians aren’t called to stone someone to death, we are called to expose evil.

Ephesians 5:11
“Have nothing to do with the fruitless deeds of darkness, but rather expose them.”

Jesus, whom Christian’s are to follow, regularly exposed evil and rebuked those doing it, in public. Anyone encouraging or allowing a child to live in a delusional state, where they question whether or not they are male or female, where they want to mutilate themselves by cutting off perfectly healthy genitalia, and where they want to pump them full of hormones, or the same medications that are used to sterilize sex offenders, is an abuser and is evil.
Every one of these “fluff” pieces that is released to the public, is released on purpose, to normalize this mass delusion, to confuse and influence more children to take part in it, and to demonize those who know it is wrong and who stand against it. These “fluff” pieces are anything but harmless. They are a slow and steady way to change culture. We have only to look back at the last 50 years, to see how this type of propaganda has changed our nation for the worse, and caused us to sink deeper into depravity. Evil should always be called out.

How about this:
I think it’s Evil to oppress gay people.

Also, I LOVE Jesus. It’s too bad more people aren’t like the depictions we get of him in the probably redacted and mistranslated stories about him. You know, “love thy neighbor,” and all that?

Well, convincing children that they aren’t the gender they were born as and thus catapulting them into the demographic of the population with the highest suicide rate would seem to be within the realm of “child abuse.”

If the kid is gay and chooses to dress flamboyantly… Hmmm…

All of this is part of the ‘destablization’ of the country.
Go read Yuri.
I read all of him 25 yrs ago.
Tried to turn people onto him but nobody read him.
And all of what is happening now he told you in 1984.