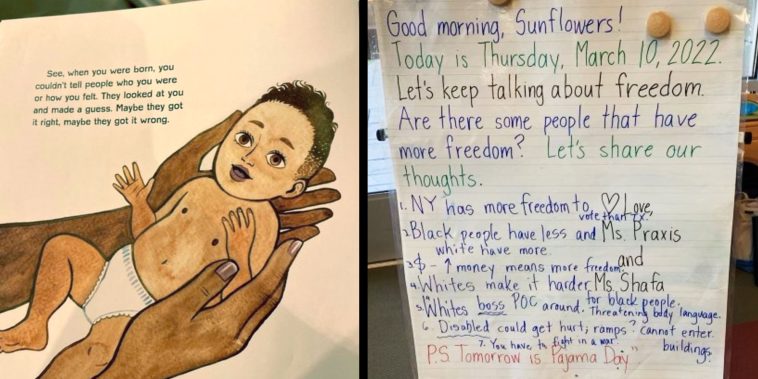 A photo of the lesson plan shown in the kindergartener’s classroom reads, “Whites make it harder for black people,” and “Whites boss POC [people of color] around.”

In the link the creator of ‘Libs of TicTok’ is interviewed for the first time which is interesting.

Texas is clearly being heavily targeted and falling to the agenda. The Bush family has roots at this school – the Bush’s migrated to Texas from Maine years ago – probably for the reason to help destroy from the inside Texas’ long history of freedom loving and defending culture.

I think they spend a lot of energy on Texas lately because they know if they can bully and disarm Texas, the rest of the country will be easy pickings.

Wow! Um…. Damn. I know about critical race theory but this in itself is racist and based on prejudice. This is perpetuating the problem and the teacher is ignorant of the tone and language used in this lesson. I hope the teacher is ignorant if this is intentional they need sensitivity training too. No, this is not white fragility, if we were to flip the language and say POC bully white people the racist tone is clear.
Instead of pointing blame this teacher should be making a point on being a good friend irregardless of race or culture. Find common grounds and focus on ways students can learn from each other reading, writing, math etc by developing the ability to work cooperatively in a team. That lesson imo is far more valuable.

Black on white crime has risen even more and gets no media coverage even though it is commonly occuring. (Search engines will try to hide it.) Even when it’s a obvious hate crime they will not label it as such and because the white on black crime and white crime is so low they have actually had to add Latinos numbers to the white numbers, yet it’s still absurdly lower than the black and Latino crime rates in comparison.

The media propoganda is escalating black hate crimes with their race agendas. It’s harder and harder to get actual statistics but if you dig it is shocking. Maybe they want a race war, maybe they want to eliminate Caucasians through a race war but whatever their objective, Caucasians are the target followed by Asians.

Did you also mention the Cop killing bias? I was looking for it. Try driving walking or shopping while Black. Then try navigating a pull over in this country just hoping you don’t offend the cop. Because you actually want to get home to your family once more. Stop this biased narrative on this thread

I haven’t lived your life and you haven’t lived mine. That being said, statistics are contrary to your belief that it is more dangerous for a black person to have an encounter with police, than it is for people of other ethnicities. Also, I’m not sure about you, but every time I have had an encounter with a police officer, I am respectful. Their job is to uphold the law. Some officers are p****s and some are kind, but put yourself in their shoes for a minute. Their job is high stress and dangerous. Could you imagine pulling someone over and not knowing if the person in the vehicle, regardless of skin color, has a mental illness, or is a criminal and might try to kill you? And to the officers’ credit, most police encounters do not end poorly. Think about how many arrests, tickets, citations and warnings are issued in this country daily. Police typically don’t just shoot someone without a reason. Below are some statistics most people are not aware of. This is because many media outlets are paid to push a false narrative that creates divide and distrust among us. The article should be read in its entirety for context, but here are the main points:

1. Cops killed nearly twice as many whites as blacks in 2015. The majority of these victims had a gun or “were armed or otherwise threatening the officer with potentially lethal force.

Are there people in the world who are racist? Of course, but anyone, despite their skin color, can be a racist. I’ve lived a long time and have met people from all over the world. Most people are not racist, but do have biases. I have also met racists within every people group. We should not be looking for boogeymen around every corner, and if the MSM is feeding into that paranoia, then stop listening to them. I don’t know if you are white, black, Asian or Hispanic, but do you personally reach out to people of other ethnicities than yourself? Or are the majority of your friends the same ethnicity or skin color as yourself? If you don’t attempt to make friends outside of your people group, who share your values, why not?
Not every white person or police officer is out to get black people. That thought in itself, is racist and biased. We need to stop listening to the MSM and build community with people of every ethnicity, who share our values. We are one blood and one race: the human race. This is how I have lived my life since childhood.
I’m old now, so here’s my advice for anyone on navigating a pullover: While it is stressful, it is not difficult. When the officer turns on their lights, pull over as soon as possible. Don’t make assumptions about the officer based on their skin color. While waiting for the officer to come to the window, have your drivers license ready and keep your hands on the steering wheel. If you know what you are being pulled over for, ie, speeding, traffic violation, be transparent and apologize, you were in the wrong and deserve the ticket. If you don’t know why you were pulled over, then politely ask why. Let the officer speak, do not become defensive. Let them do their job. If you get a ticket, but don’t believe you deserve it, take the ticket politely, go on your way and take it to court. This way, both of you will go home safely to your families.

Aletheuo, what you have said is beautifully done. You made a point and backed it up with ample, in this case way more than ample, evidence.

The misperceptions around these statistics are being exploited to a tremendous degree – not only do statistics show the truth of the matter but you also adeptly point out the hypocrisy too many people are living with.

Might I suggest to Thabunny a place of forgiveness has not been reached in wrongs done upon you both real and imagined.

Open your eyes. You are being played by the same party that actually fought AGAINST their own countrymen in the US FOR SLAVERY.

Yeah… I’m always just trying to boss people of color around in order to make life harder for them, so that they can earn less money therein having less freedom. They got me.
I didn’t work hard, work with and live with and date POC all my life. I don’t have POC in my family, nope nope nope. Every time I see someone with even a suntan, I freak out mentally and post myself against their life path. Like, I’ll literally stand in their way and say
“NOOOO YOU CAN’T DO GOOD LIFE OR MONEY MAKING NOOOOO” lol

It’s histerical until you realize they are indoctrinating kids with this hog-wash.

P.S. How dare they host a pajama day~!?? Don’t they know that white people have made it impossible for people of color to even be able to afford luxuries such as pajamas??? (#2) Don’t they know that white people boss people of color around and tell them what they can and cannot own?!? What if a white person told a person of color that they aren’t allowed to wear pajamas? What then!? (#5) This pajama day is certainly not inclusive to those who are less fortunate than the whites!!! This school needs to be #cancelled ASAP until it can show more equity. This is a war after-all, and you can’t wear PJ’s to a war. (#7)