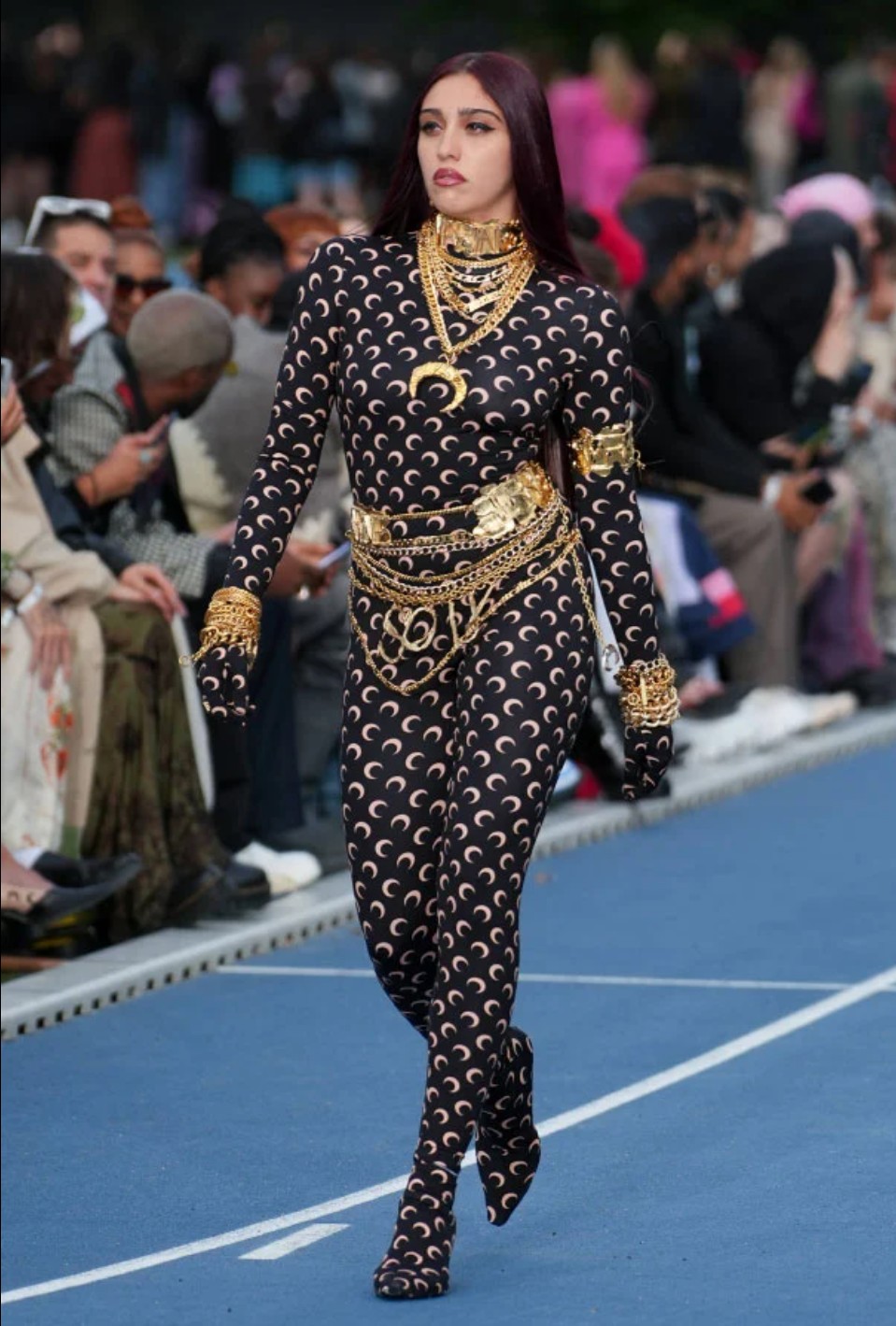 The gold jewelry around her neck,wrists and waist looks to resemble shackles keeping her feline side at bay imo. The occultic cresent moon logo cat suit is an indication of beta kitten programming which she more than likely started at birth given who her parents are.

The cresent moon has many meanings throughout history. Its ancient association with Ishtar/Astarte and Diana is preserved in the Moon (as symbolised by a crescent) representing the female principle (as juxtaposed with the Sun representing the male principle), and (Artemis-Diana being a virgin goddess) especially virginity and female chastity. In Christian symbolism, the crescent entered Marian iconography, by the association of Mary with the Woman of the Apocalypse (described with “the moon under her feet, and on her head a crown of twelve stars” in Revelation) The most well known representation of Mary as the Woman of the Apocalypse is the Virgin of Guadalupe.

Anymore further/alternate analysis is always welcomed so we can all learn, thanks!

Only way she can get the attention she and her mother crave.

How is this person even a model ~ other than her famous mother? Ugh. I feel like these people’s energy vibrations are painted on their faces… and it’s not good.

It just like Kamala Harris’s step daughter using influence to try to become a catwalk model. People said she looks like Weird Al in the 80s. But then again these are children of the elites who are now in young adulthood and they were taught that hard work is only something commoners are meant to do.

She is chucking fugly

These hollywood demons are allowed to adopt innocent children.

This is straight from hell.

Lourdes was not adopted.

She wasn’t adopted which explains why she is as ugly as her mom. Her black son and another orphan who still had biological family seeing her and bribed the government to take her home are the kids she adopted.

I’m sorry but the brand is Marine Serre. I have the exact catsuit, it was really expensive but the quality tho… it’s one of my favorites. It’s so popular among young people. And if people would stop to find occult stuff in everything that would be better. I wear tons of clothes with butterflies and leopard print. That doesn’t mean I’m a kitten, I’m a normal human being, not famous not even popular in school