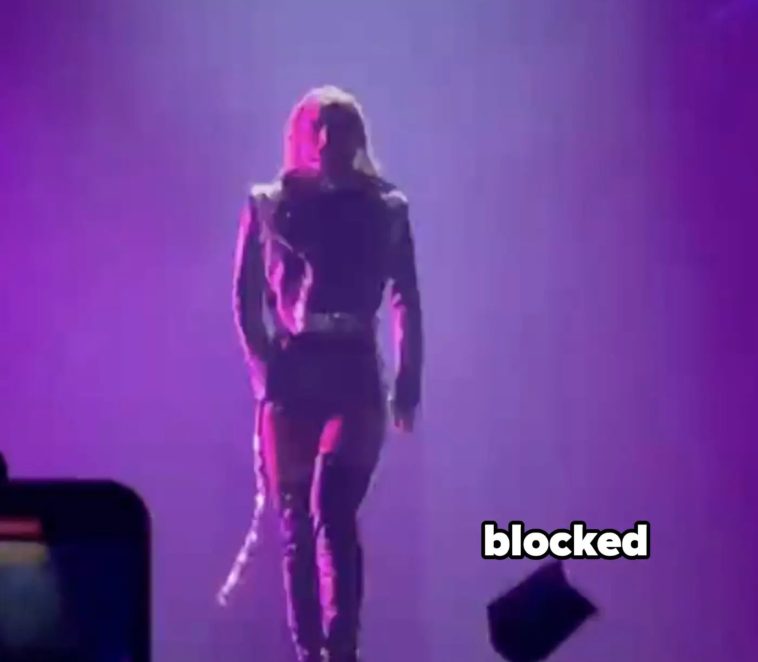 Mabey some type of advanced Covid sheild? It’s weird because if you watch some of her show from that night in Germany whatever “sheild” is there isn’t visible on stage or observable to the human eye, like nothing is there,no reflections, no dirt ect… I’m thinking some type of air blower? lol..Just odd.

Mariah Carey sitting on a invisible chair?One thing about the covens operating in public eye nowadays is we know who to stay away from.

And no one is famous now unless you join the “one eye club”…………..selling their soul for fame and fortune. but the price is horrific. rituals and initiations on tape so you are kept in line. period. end of story. next. Time we woke up. The devil was always a liar………………….God is our answer. Choose wisely.

I wonder if it was a large tv type screen playing a video of a “love show”.

Didn’t even think of that lol good one!

If you watch the concert on cell recorded videos you will see that there is discoordination between the side screens, placed at a high angel, and the actors “on stage,” which goes beyond simple delay; the video is pre-recorded on a mock stage with the real Gaga and then played back during the test run of new age projection techniques.

This effect is achieved through holographic projection, as was used to “revive Tupac” in 2012, however now combined with the more advanced use of its projection onto “new-age” materials, called plasmonic-gold meta materials, or DNA doped superlatices, which combine the use of DNA coding and diatomic gold to achieve programmable light bending, refracting, lensing, and projection that can be used for undetectable invisibility cloaking, or hyper realistic holographic projection, as it was on this case.

Its existence, known and then engineered starting in the 1949 through operation paperclip Nasi scientists, reached operational maturity for military aviation during the Lockheed Martin stealth programs in the 1960s and 1970s. This tech was finally unveiled to the public through Northwestern University (owned by Saros/Roth$child clan of Dragons) in 2014. In essence, the object thrown hit the second layer of hardened chlorine glass projection screen and fell to the ground.

All of the “Gaga is magic” propaganda (Kaka is the hemaophrodite Babylonian Messenger of the underworld) is just a cover to distract from the NW0 current test runs at Qi energy harvesting (the purpose of pop concerts) with the use of pre-recorded performances, eventually becoming AI produced deep fakes. 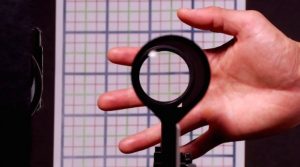 You can see low grade demonstrations by searching for “Quantum Stealth Invisibility Cloak,” which began development for the portable, passive (no electrical current or stimulus requires) cloaking fibers over a decade ago. 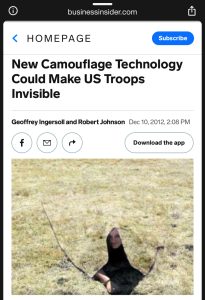 Thank you for your indepth explanation. Operation Paperclip indeed. That’s a rabbit hole in itself.
It took me a long time but it finally resonated with me about what “really happened” that “we saw” on a certain date in 2001. Holograms. Thermite and holograms. If you want to see more, look on youtube for “Dubai hologram zoo” – so much is going on but what you see or are being told is not really what is happening. don’t believe your eyes, discern! God is the answer, this is a spiritual experience and “that side” is trying to capture as many souls on their way out as possible. God bless us. (BTW “lady” gag-me is no “lady”. Think Big Mike, et al). Wakey, wakey.

Wow! It’s weird you bring this up. A few days ago I read that the band ABBA was putting on a holographic concert and the creators of it said “ABBA’s “hologram” concert is not actually a hologram concert at all, but it is the first of its kind as it blurs the lines between physical and digital in a specifically designed arena”
Here is the website,it even has a video preview of one of the concerts in action:
https://abbavoyage.com/

Ab Ba (“From the Spirit Body” in Ancient Egyptian) showing exactly this MAGIk phenomenon in the open; a motion capture projection of their younger selves, playing an abomination of music into eternity… curdling to see the promo video where the people are willingly adoring Luciferian light bodies

The most disturbing thing is how idiotic the writing and comments are. Liiikkkeeee LITERALLY wtf.

This is more normalization of witchcraft and magic, whether real or engineered. Mariah Carey was sitting on something hidden in her dress just like the street performers do, I’ve seen it many times.

It is Project Blue Beam. This secret long term project was developed to possibly create a fake alien invasion where people actually see space ships in the sky or maybe a fake “god”

I just like imagine a guy in the back with a leaf blower doing every reflective protection to defend kaka from getting harmed lol xD i cannot take this serious, i know the comment section explains about said technology they are using but it had me laughing too hard.
Anyway this is still fugly, and kaka is still a warlock, for those who dont know this isnt a woman….. someone from a different post was sharing how gaga actually appeared on stage years ago – let me just state that the factial structure jumped from 80s make up man to a petite feminine woman..disturbing how many fake surgeries he did to look like this..

Many things on this site seem too outlandish to believe – until the research is done.

There is a ton of info available on Project Blue Beam. Seems hard to believe until you swim in those waters for a while.

And although there is a witchcraft element – this goes far beyond that. The technology is absolutely available and much more.