“Alice and Jack are lucky to be living in Victory, the experimental company town housing the men who work for the top-secret Victory Project and their families. Life is perfect, with every resident’s needs met by the company. All they ask in return is unquestioning commitment to the Victory cause. But when cracks in their idyllic life begin to appear, exposing flashes of something much more sinister lurking beneath the attractive façade, Alice can’t help questioning what they’re doing in Victory, and why. Just how much is Alice willing to lose to expose what’s really going on in paradise?”

Movie doesn’t come out until September but I hope VC does an in depth breakdown on it. Looks to be pretty secret-government-cult-mk ultra type of movie for sure. 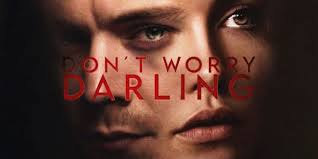 Notice how them trying to place a story in the past looks so bad now. It’s because of the modern film and it looks like people just doing cosplay in 2022. I mean they can’t even film a scene of them watching tv, going to the movies or into the city because of how advanced it is now. Basically they can’t film them doing a lot of regular things back then without a fake set. But they have started pushing the broken vintage housewife agenda. A new limited show called Candy has this agenda too along with the movie Swallow.

They always do terrible casting now in period pieces, too. Putting a really modern American looking person in something like a medieval movie just looks stupid.

This looks really interesting. One of those movies that has revealing elements about how things operate among the elite and how they control and manipulate people. Also without being so grotesquely violent that is scarring to the psyche.

It reminded me of that great X-Files episode when Mulder and Scully move into a company neighborhood where everyone has to follow the rules to the letter or else a monster comes and kills them. This movie looks like it takes that element and goes way further.

I will probably wait to see some reviews to be sure all the best moments are not in the trailer and the rest of the movie sucks which does happen quite a lot. Like the movie Hereditary. The trailer was really good but the movie was awful.

Everything the deep state puts out is awful.

So there isn’t one hollywood or disney movie you enjoy? They are all “deep state”.

The Sound of Music is a delightful and epically happy movie that I continue to watch to this day and am always entertained and thoroughly enjoy.

Or The Matrix which is universally praised by the “awake” community for offering incredible insights into the human condition.

Many hard core christians seem incapable of getting past the perceived evil in everything and for that reason seem bitter about a lot of things.

Olivia Wilde is an evil, narcissistic shell of a woman. Why would anyone say this without knowing her on a personal level? Simple – she gave a family member of mine horrible advice that ultimately resulted in a broken family. I can’t give specifics but would warn anyone that will listen to not support her or any projects associated to her.

I have no doubt Olivia Wilde is what you say she is – and not someone I would want involved in my personal life. The only reason I would watch a movie like this is if I believed it would offer some unique insight that only the elites can do.

They do after all have a lot of access to hidden knowledge and potentially helpful information.

Again that’s personal business and people wouldn’t care that Olivia told your family member to do something that would be the opposite in repairing a bad marriage/dysfunctional family specifically because you chose not to give details. That would make the media say that your just trying to spread rumors and even promote Olivia’s career.

“They’re lying about everything”

Directed by Olivia Wilde, pretty sure she might be a t****y. Also dated Harry Styles. Probably tons of predictive programming in this movie.

The lead is Florence Pugh, who was in the occult Midsommar, and the trailer includes one eye and broken mirror symbolism. I don’t really need to know more than that to guess where it’s going. They just recycle the same project over and over to push the agenda.

It does! Lol why did someone down vote this sentiment?