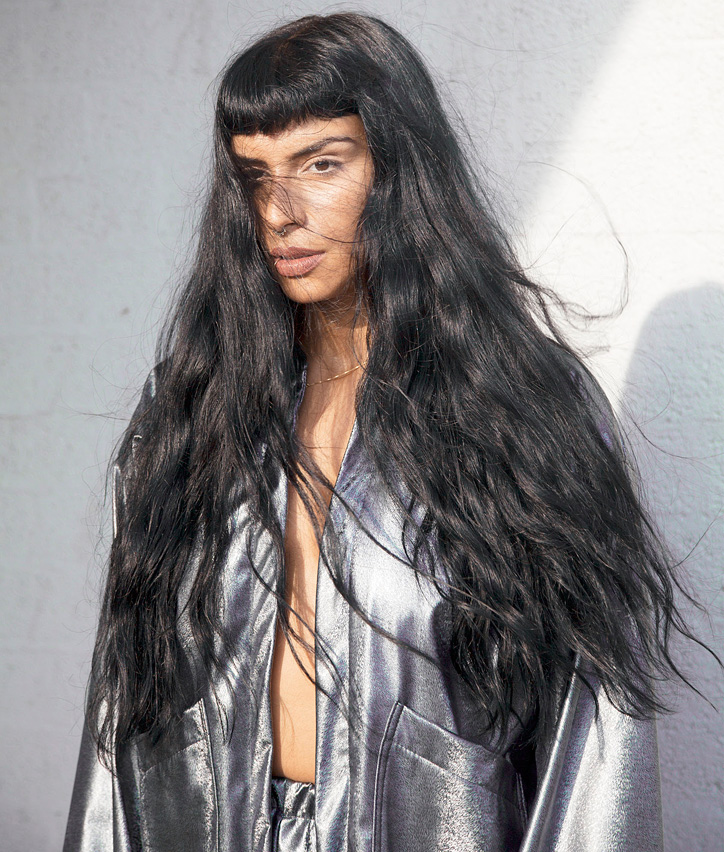 Sevdaliza is a 34 y/o trans woman of Dutch-Iranian descent, with hundreds of thousands of views on her music videos. She is popular and well liked. She has also made appearances in iD mag, Vogue, and Forbes to name the few I found in about 8 minutes on Google. I’ve never heard of this person before. They were suggested to me after watching some Sudan Archives not-so-subtle symbolic music videos. 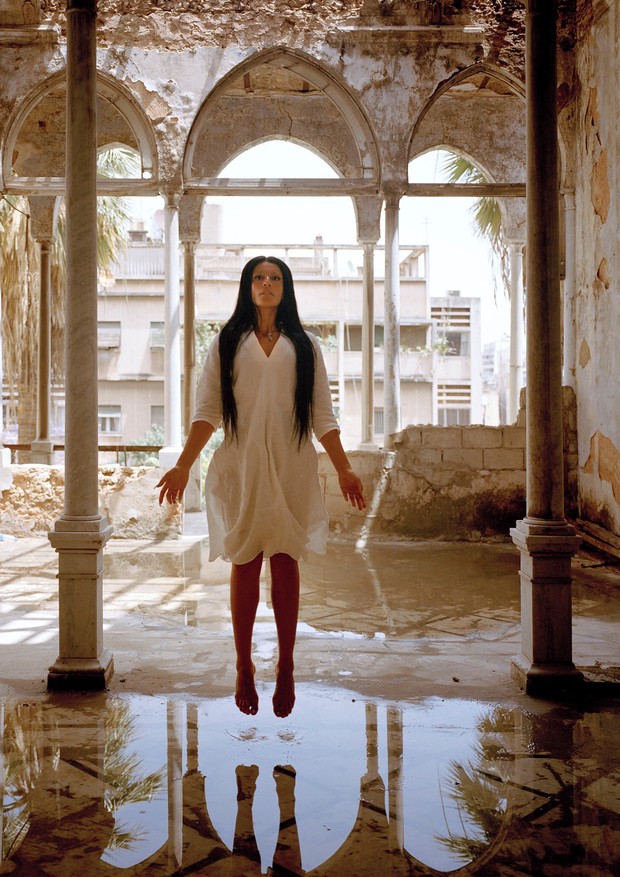 This is courtesy of Vogue Portugal. Anything from Vogue is guaranteed to be 100% dripping with occult symbolism. If you’re here, you probably know & expect that. I don’t even have the energy to analyze in detail all of the sh-t we’re seeing here. Levitation alone could symbolize the feeling of dissociation from torture via Monarch programming. Could symbolize the Ecstasy of Enlightenment. Could symbolize demonic possession. As Above, So Below is just IN YOUR FACE here. Twin pillars, the Arch, the number 3. Really shoving it down your throat. This person is either connected to the Elite or being manufactured for your programming pleasure by them. 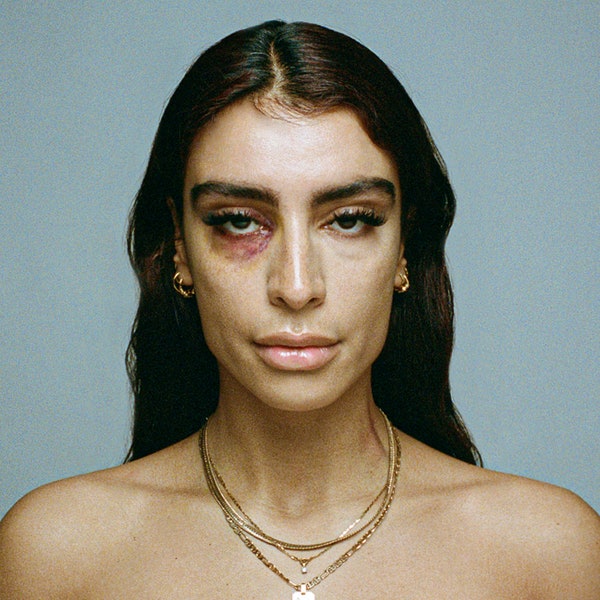 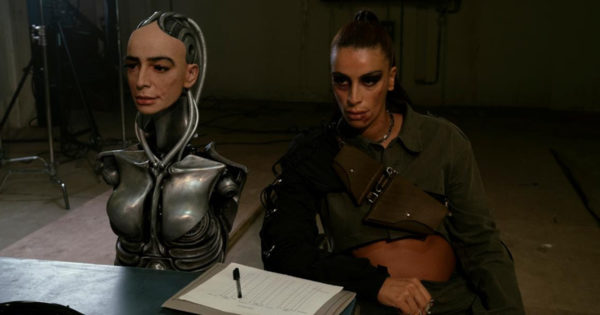 This is a still from a project she is in called “Homunculus.” The name alone is telling and of course the increasingly popular theme of transhumanism is represented loud and proud. She is sitting next to herself. This is also interesting if you entertain the theory that many key figures we have come to know are merely people in latex masks, just actors. Another way to interpret this is representative of a basic Monarch Mind Control goal: splitting. The Alter is the robot and the damaged human with the busted lip and black eye is the Core Persona. You can watch Homunculus for yourself here. I admittedly have not, but that’s also because about 20 minutes after discovering Sevdaliza, I was writing this article. I am sure there is A LOT to unpack in Homunculus. 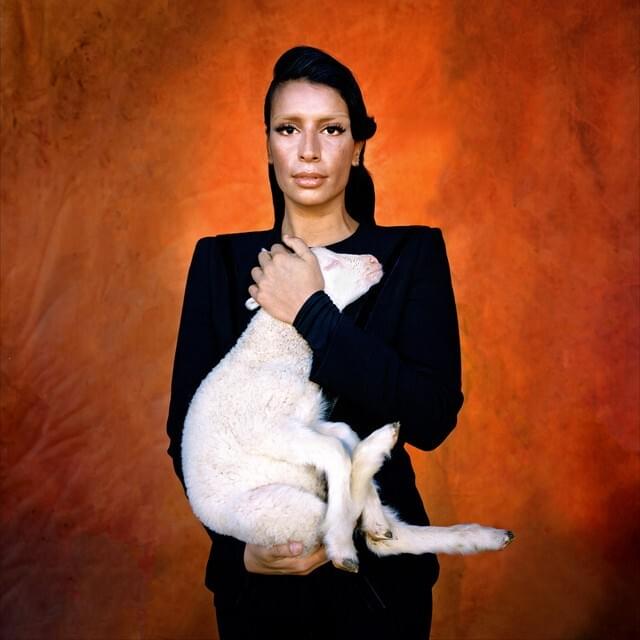 I’m honestly not sure if this is a goat or a lamb but it DOES tie in fabulously with the theme of the music video for the song “Human.” If nothing else, we see Black and White. Polarity. As Above, So Below. The Yin/Yang. Duality of man. Again, just basic tenets of Free Masonry/Hermetic Mysticism. 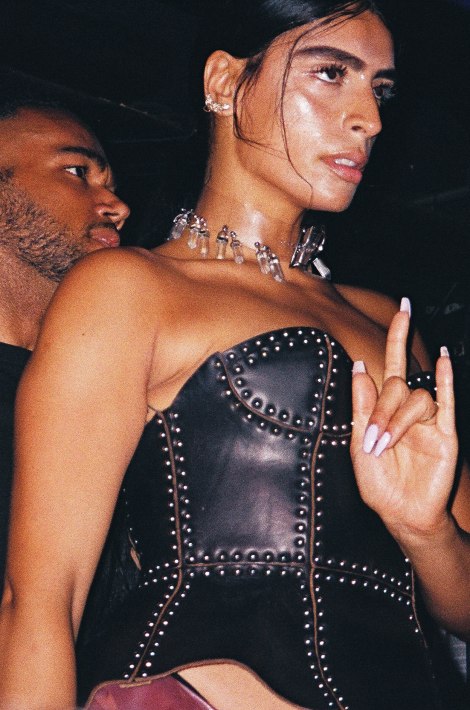 The bottom image is a still from the music video for “That Other Girl”. Gorgons, snakes & pillars and what are those, glass globes? Yeah… How many times can we see this symbolism in mainstream music videos and tell ourselves it isn’t intentional? That the confirmed and established patterns they keep showing to us are just a coincidence?

Finally, the video for “Human” which compelled me to write this whole article: 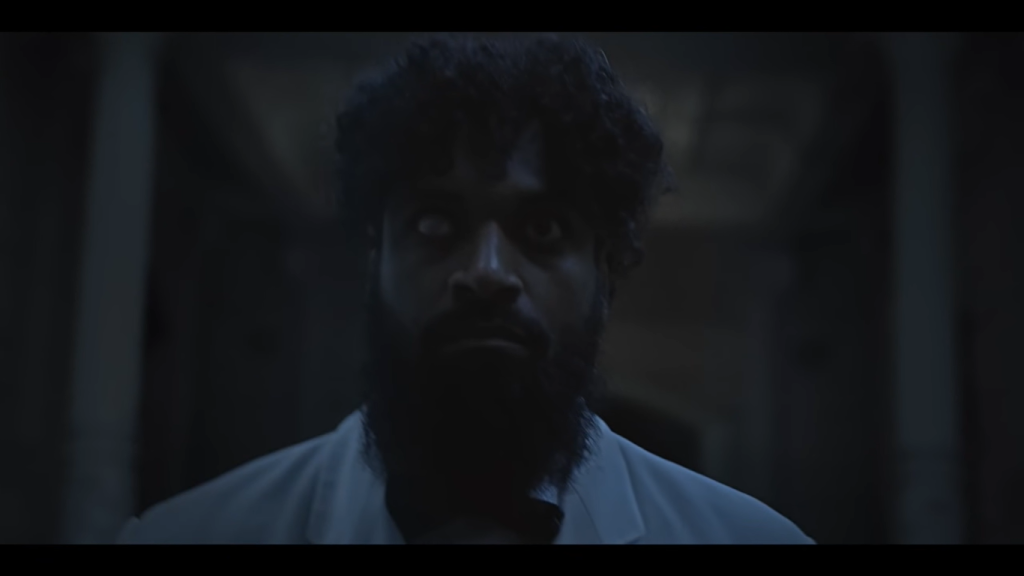 The music video for Human is, well, weird. Enter a one-eyed bellboy walking down a Biltmore-esque hallway between twin pillars. Surprised? Me either. He and everything else around him are all in black and white. 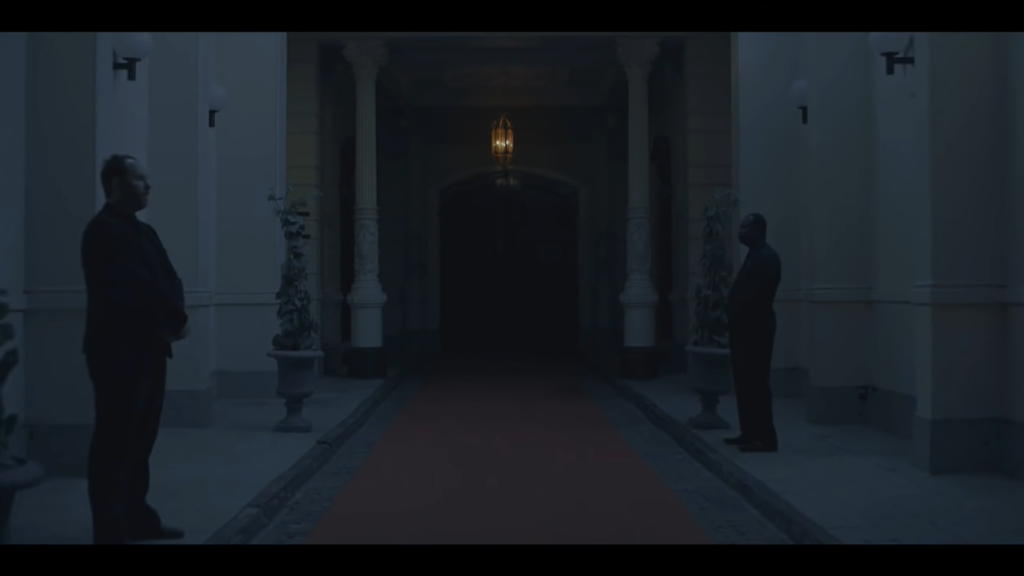 Black and White security guards stand motionless before the twin pillars. When the one-eyed man enters, the room is filled with old, sweaty elites of varying races seated upon what appears to be an ornate opera balcony. 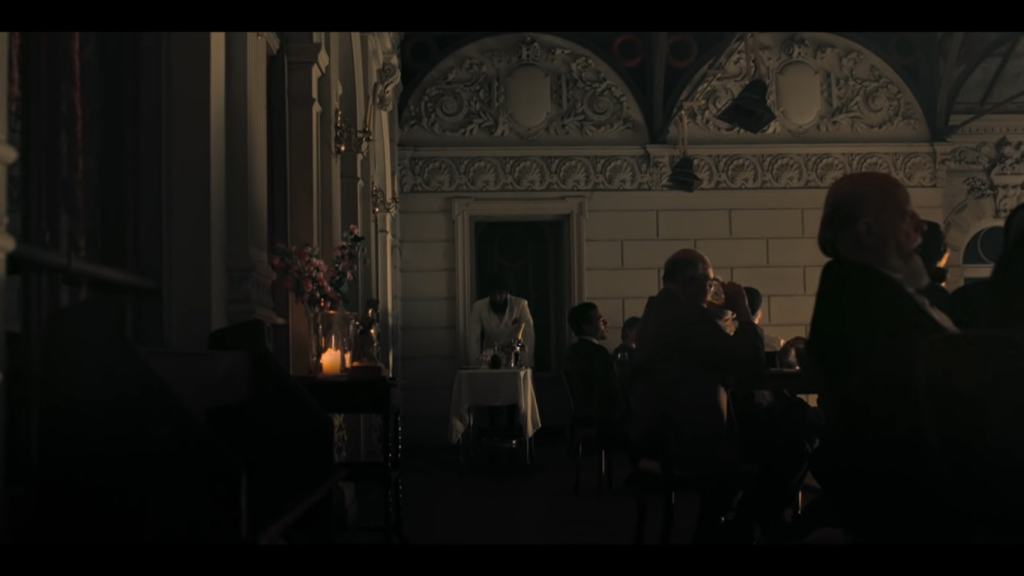 Sevdaliza descends a staircase cloaked in a black hooded ritual robe (I really didn’t feel the need to screen cap that) and then appears in a giant dirt pit below the Elite, on display. She disrobes for this reveal: 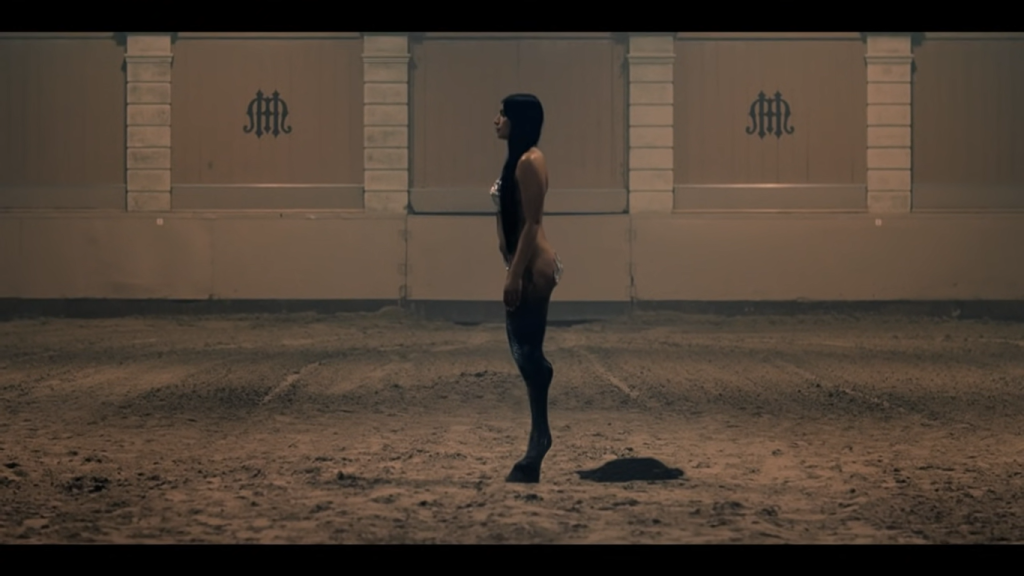 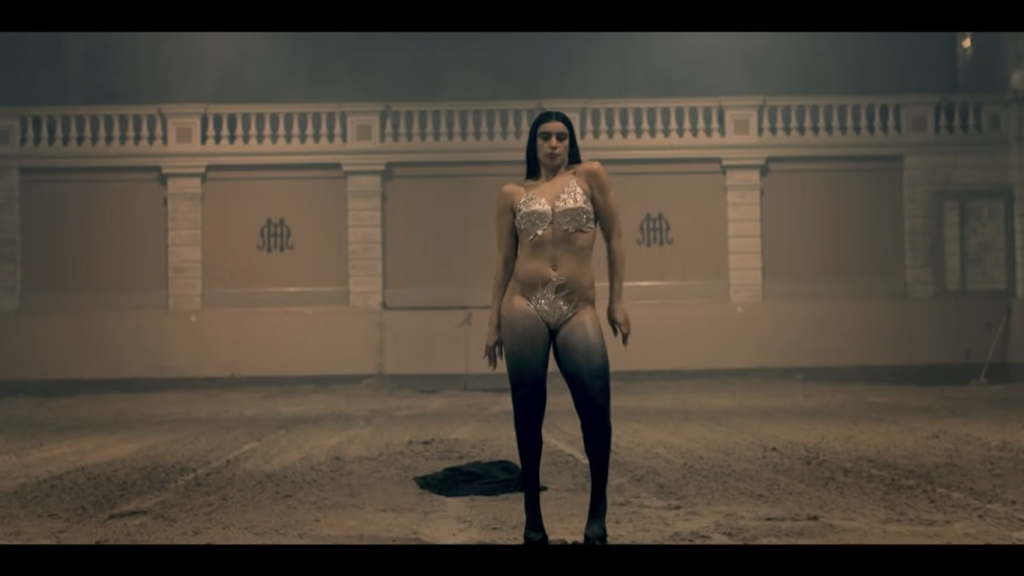 So yeah, she’s about to do a private sultry belly dance for some elite dudes with her hooved feet. Nothing to see here. She’s half woman/half hooved, centered yet again between two pillars in case you forgot about pillars. (I’d like to take a moment to say, I’m aware of the Deer Woman which is a big part of Native American lore. I’m aware of the Deer Dance. I am willing to go out on a limb and say they were not referencing Deer Women, rather referencing Baphomet.) Baphomet is a horned hermaphrodite with goat legs. Here we see the visual representation of a “woman” surrounded by pillars (which are phallic symbols) with goat legs. At this point the song basically just turns into a hypnotic trance beat where she repeats “I am Human” over and over again. The music glitches out when she starts dancing, the lights flicker and the camera spins UPSIDE DOWN. Inversion. As Above/So Below, which is the exact hand gesture Baphomet is depicted making. 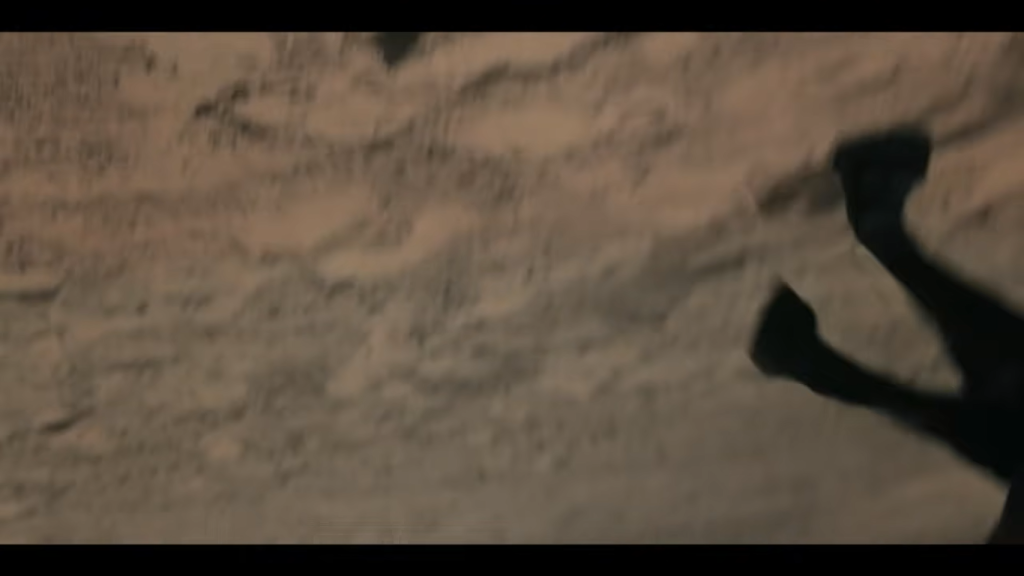 Inversion and spinning are often used in music videos to denote duality and dissociation and all that, but spinning, like literally being spun, is a torture device used in Monarch programming. This stuff all kind of goes hand in hand. All this bullshit is a Revelation of the Method. When we consume it without inquiry or analysis, we’re passively & unconsciously consenting to be part of rituals which expunge occultists of their sins. That’s Rosicrucian Doctrine 101. 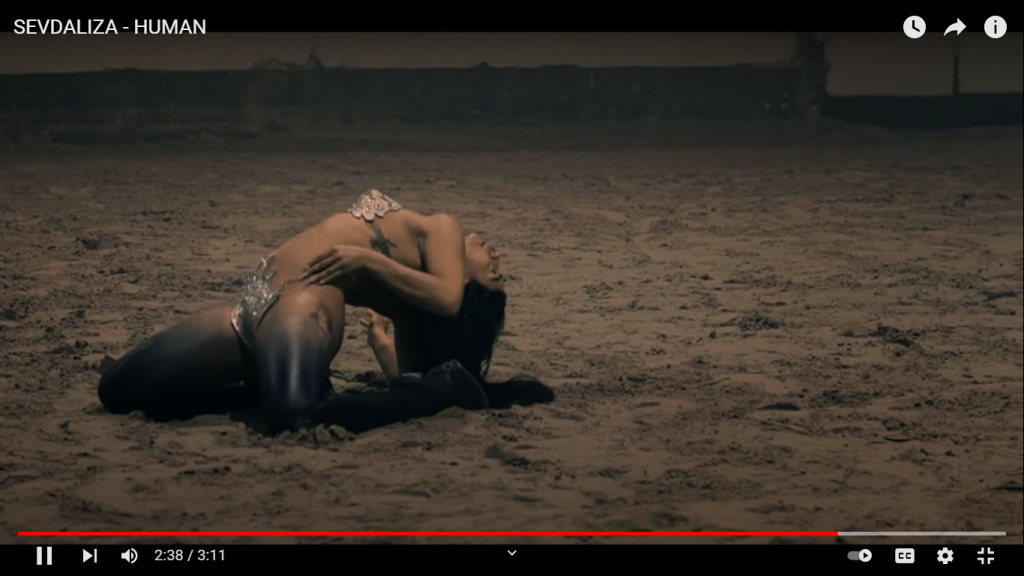 The Arch of Hysteria is pretty popular these days. You can see it in Justin Bieber’s July 2021 music video for STAY, as well as Zendaya’s video for the Euphoria series called All for Us. 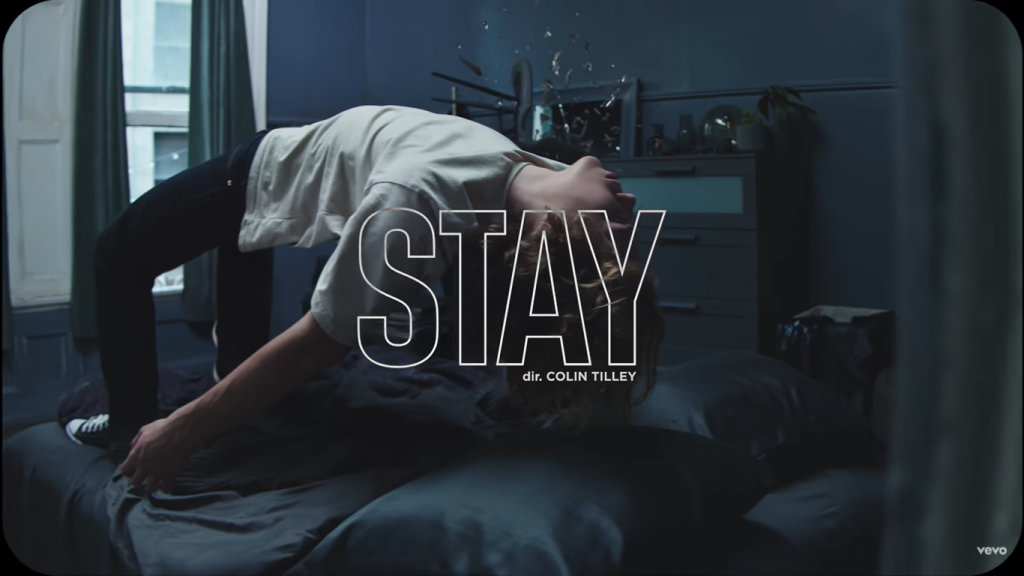 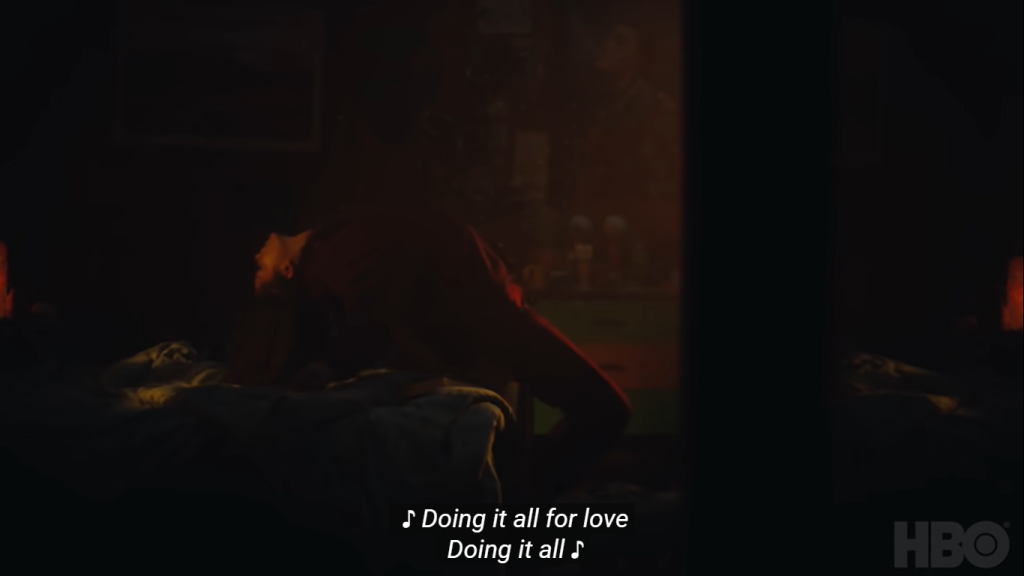 (Unrelated: both of these screenshots taken directly from Youtube include bonus mirror symbolism. The top: shattering mirror, and the bottom: literally the one and only time in the entire series that a mirror effect was put on anything. Prob just a coincidence, right? Haha.)

Back on topic: the Human video ends after the dance is complete with the one-eyed man and Sevdaliza staring into one-another’s eyes, like they are connected in some way.

So, what do you think?

yes! looking at the waistline belly button alignment, the brow ridge, the shoulder width….there doesn’t appear to be much of an attempt to mask that fact either.

hey, I almost said exactly what you suggested, but i was also trying to publish this article under the username “Domestic Terrorist” which VC themself had to email me about. I figured adding a layer of pointing out “this is so clearly a dude. holy shit, look at this dude,” was a step toward not getting published at all. But you’re welcome to write your own article and call whoever you want whatever you want.

That is also why I specifically said, “the visual representation of a woman” because, it isn’t a woman.

She’s not trans. She’s Just very manly looking.. I’m pretty sure she had a baby. She even posted a few Pregnant pictures.

Maybe she is just androgynous. Check Rain Dove, another example.

Hello and thank you for not posting scary pictures here. I appreciate your thoughtfulness. There are sensitive people who like conspiracies, but don’t want to see demon photos. I’ve heard of her. I didn’t know she (he) was trans, I thought she was just really ugly. Her music is dark and boring, I listened to 20 seconds of just one of her songs and it was enough. For me, she is not a woman. A woman is someone who can give birth and who can shed blood. Someone with XX chromosomes

Good article! But Sevdaliza isn’t trans lol. She was Pregnant a few years ago. She still very off.. But she’s definitely a she. https://www.anothermag.com/art-photography/13759/a-portrait-of-pregnant-sevdaliza-by-paul-kooiker

She’s not trans. She was pregnant and several photos of her growing belly can be seen on her instagram