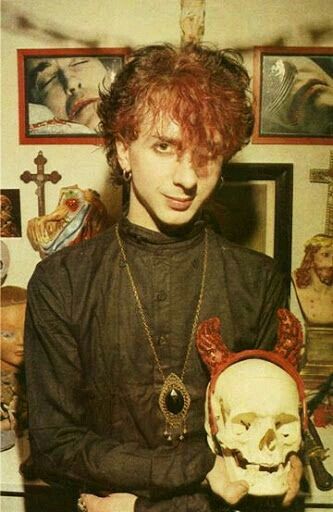 From his Wikipedia page:  In his autobiography, Almond describes being invited for initiation into Anton LaVey‘s Church of Satan, and that “not being one to turn down a theatrical moment and a chance to be relegated to the bad book, I immediately said yes.” Noise musician Boyd Rice performed the simple ceremony in “a small grotto in a wood” close to where the Hellfire Club used to meet. Almond states that the ceremony involved “no dancing naked, no bonfires, no blood sacrifice”, but even so “every hair on my neck stood on end and sweat broke out on my top lip.”[55][56] Almond later stated in a 2016 interview with Loud and Quiet that the initiation was “a theatrical joke that got a bit out of hand” and that he is not a Satanist.

I had no idea of Mr Almonds connection to Satanism. The photo is utterly chilling. His explanation of ‘theatrics’ is laughable in the extreme, he has engaged in a symbolic ceremony of the lowest order.

Horrifying, isnt’t it? I started to realize there was something really wrong with New Wave when I watched the London Olympics opening ceremony. The entertainers all seemed to be rooting for our demise.

Nastiness. Look at the very disturbing photographs on the wall as well.

I never liked this wrong un from day one.