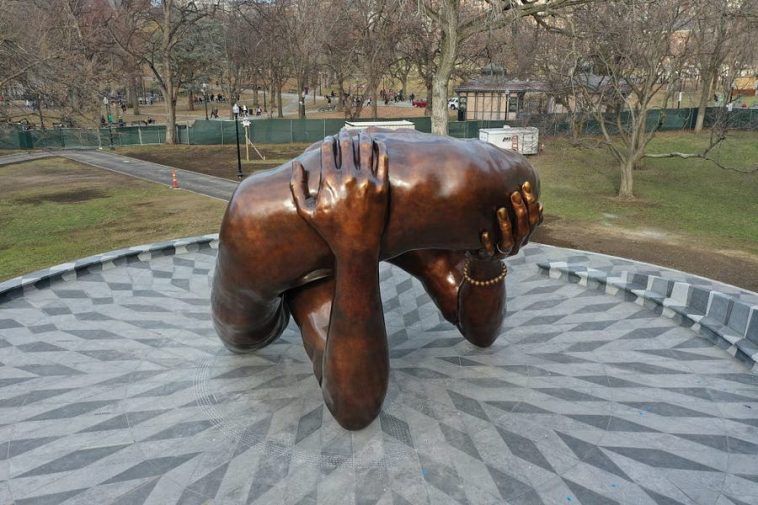 Entitled “The Embrace” and ostensibly a bronze re-creation of an allegedly famous photo of MLK hugging his long-suffering widow Coretta when he won the 1964 Nobel Peace Prize, it’s memorable in all the worst ways and clearly another degenerate Sign O’ The Times  during our slow-rolling American Apocalypse.

One of the most impressive things about sculptor Hank Willis Thomas’s reportedly $10 million piece of anti-art that got unveiled over the weekend in vvitchy ol’ New England is how “The Embrace” looks obscene no matter what angle you observe it. It’s just a question of which public obscenity we’re talking about.

Article did bring up something you rarely hear about, even at the time of its release – The Christian Bale movie ‘Equilibrium’, it came out at roughly the same time as the Matrix and if not having seen it they would be easy to mix-up – long black coats and lots of gunplay.

Equilibrium was quite a bit more 1984 than the Matrix’s reality questioning. Still more of an action movie than philosophy/politics discussion, but it is there.

In short – Post WW3, human emotion is determined to be the cause of all problems so in a centrally managed society all art and literature are destroyed as contraband and people take their daily dose of ‘Librium’ to stabilize their mood and behavior. Bale’s character is one of the elite enforcers who begins to question things.

–
Librium exists now as a trade name for a benzodiazepine (sedative/hypnotic) but I don’t believe it did at the time of release – there would have definitely been lawsuits.

But now you have to wonder why they chose that name, there are whole marketing groups and agencies that go through things to find all the positive and negative associations of a name.

I missed this film when it came out but watched it a few months ago. (Anything you watch post 2010 is unwatchable to varying degrees.) I know what you mean though. Okay it’s not lithium but they must have done the homework. I mean the film is pretty forgettable but even so. Like you say why didn’t they pick up on the connection. Can you imagine if it’d been as popular as the matrix?

I find it interesting how the goals of the regime in Equilibrium are being achieved in this society without banishing that which causes emotion. Instead of banishing art, the classics are shown as stuffy and pretentious, while new art is ugly and shallow while being pushed as “groundbreaking” and “thought-provoking.” Instead of drugging people into complacency, they are provoked into highly emotional states where reason is omitted and is replaced by feel-good ideas. Cause and effect don’t matter as long as it feels right to do something, but that something is placed in their minds by the cultural leaders who don’t really care about these issues, but only want power over the people.

They work both sides of the drug issue. Smoking and drinking is a favorite American pastime and everybody is pharmaceutical laden.

So glad people thought it looked like a sex act – I thought I was seeing things.

Getting negative responses for commenting about the look of the statue elsewhere, but even member’s of the King family are voicing the same opinion
.

Degrading and very disturbing doesn’t even convey the depth of how sick it looks..and the public will be forced to see it..through no choice of their own.TPTB continue tearing down heroes in plain sight 😢

Yeah, it is really annoying… Is like run to an endless road to believe that media personalities are doing things without being compromised with higuer elite and silent oath. I really Opened my eyes with VC web. And recently with shocking testimony of Truth on video ALTIYAN CHILDS EXPOSES FREEMSNRY. Look and open your eyes to the Truth. >> the right eye utterly dark is one of the Symbols coz is allegiance to Darkness itselves. The lost souls. Receive Jesus with UR heart and u will feel different but knowing that purpose of Good and Evil of this times.

Beauty is a gift and is heavenly. In the last hundred or so years we have seen a gradual degradation of the beautiful to be replaced by the mundane at best and ugly at worst. Architecture for example, compare the great cathedrals in Europe to the glass monstrosities that are being erected today, modern art in which paint is literally thrown onto canvases, and the feminine beauty which is being mocked and ridiculed with transvestism.
Satan hates beauty because it’s reminds us of the divine nature of God himself.

Members of this club are basically 99% reddit r/atheism nerds with tech jobs. They think they’re so smart because they make more money than their peers. The thing is, the technocrats are elite dark sorcerers who understand the spiritual nature of reality, and all their minions are entirely devoid of spirituality.

It’s mostly asians and old people here in College Station Texas who are still going along with masks. What’s it look like in some of your cities? This is the strongest push I’ve heard in a while for strict mask and injection compliance. 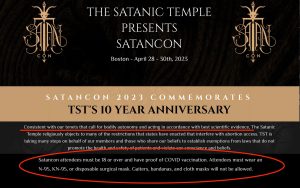