Easy ones are, of course, Saturn and the mannequin heads with wigs. Interesting to note that Gwen’s hair is a combination of the colors of the two wigs.

Of curiosity, the seeming spiral/portal on the back wall over the doorway to the bathroom. And every bathtub needs an urn on the edge, right? The coloring of the bathroom looks like lipstick. This leads to the murals. The weaponized lipstick is an interesting touch, as is the birth control dispenser mural. Are sex and beauty weapons to the elite? Is sexual allure a portal to death? Perhaps by “drowning”? Why the wedding cake? Is that how you get sucked in? Who is getting married, and to whom? Or what?

His cup overfloweth, but why are the egg and the mask watching over it?

So much “illumination.” I count 8 orb lights.

There’s also the naked man leaping in ecstasy, almost like he’s on drugs.

I’m remodeling $950 per day using my phone part-time. I’m presently on my fifth record for $27,000 and each one I’ve made has dxa been from replicating and pasting photographs off the internet. This industry helps the United States bi-06 generate more money every day for certain goals and tasks, and the quality earnings are just amazing. More information may be found
In this article——>>> https://googlejobs01.neocities.org/

Funny how these bots think that it’s idiots that visit this site.

Gwen Stefani is a man. Search for images of “Gwen Stefani muscles” for some helpful photos. Yes, I understand women can be muscular. But Gwen has a prominent Adonis belt, male shoulder-to-hip ratio, etc. That’s why he looks like crap nowadays; the male skull ultimately rears its head, no pun intended. This is why Cindy Crawford looks like Caitlyn Jenner now, as does Brooke Shields.

Seek out “The Trans Files” on Youtube, or MrE’s videos, which are scattered all over the place between Bitchute, Odysee, and Archive.org. MrE’s current channel is on Bitchute, and is called “Apocalypse_Watchman by MrE.” There’s an archive of some old stuff of his on Odysee under the channel name “MrE.”

Please look into it before you give me a downvote!

Nobody
Reply to  Nancy Tuttle

Or maybe it’s s******s, surgery and other sinister stuff combined?

Noticing the woman covered in blood (red), she was probably the married/promoted one, after this album this band gained a lot of notoriety and the singer went on solo career, full of alice in wonderland and MK slave programming in the videos and lyrics. She even released a brand of bags called L.A.M.B. (“love angel music baby”).

Always thought it was weird she was from Anaheim.

I know Gwen Stefani became an major A-lister and hooked in everywhere, but did the rest of the band matter since early 2000s?

Mirror photo shows a bowtied Elmo Diablo in the middle lol I don’t know if there is a connection to the puppet with the occult but the guy who voiced Elmo was accused of sexually molesting underage boys about 10 or so years ago and he resigned his voice job because of it. 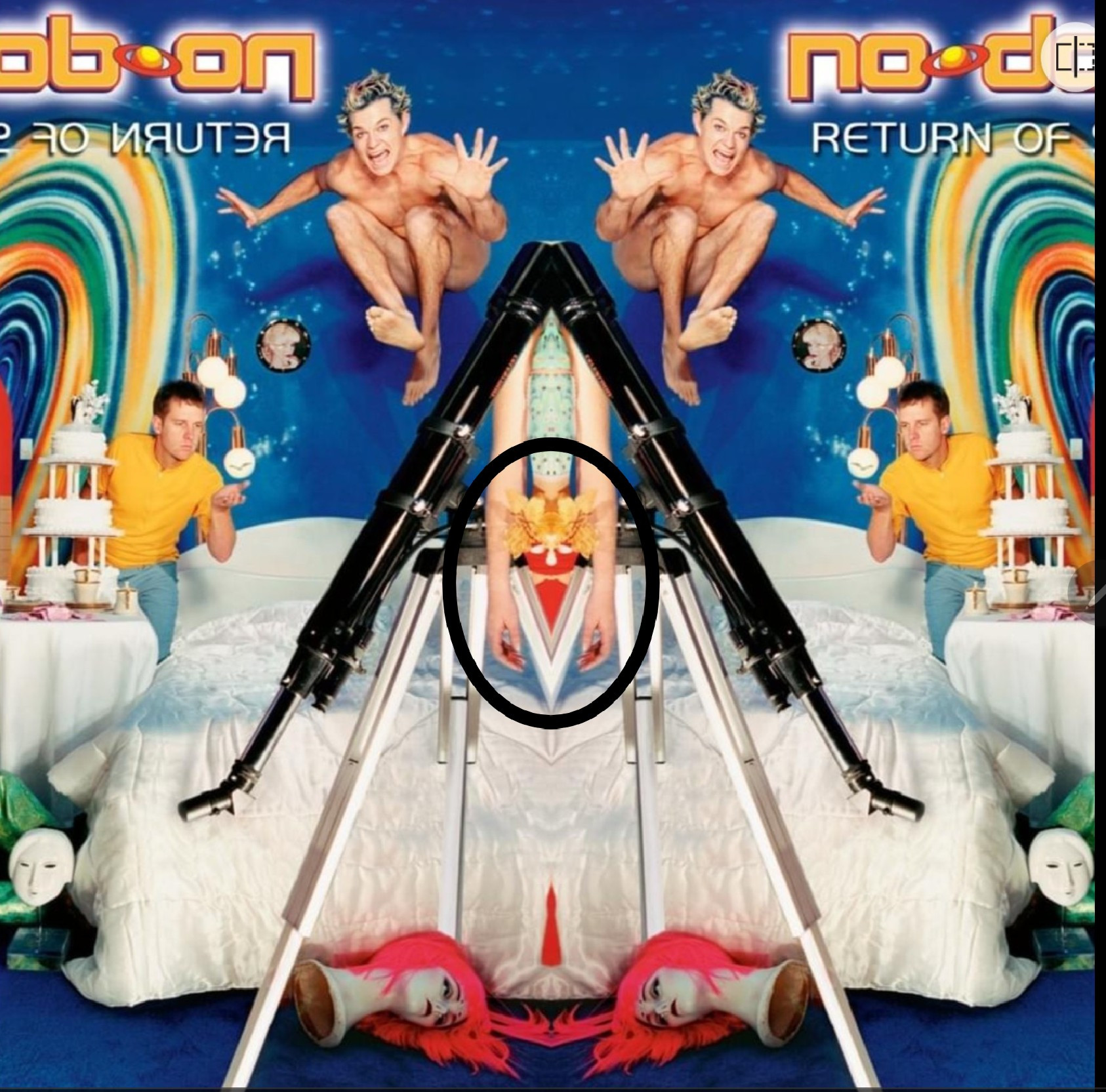 I watched the docu-series The Defiant Ones on HBO before I was awake. It’s about super-producer Jimmy Iovine who’s worked with Dre, No Doubt, U2, Tom Petty, the list goes on and on… Looking back, I realized that Jimmy was sitting back and watching these bands until they were “ready.” He made No Doubt work for his production services, but what I noticed, specifically with No Doubt and U2, is that Jimmy’s first album with each one was their last album before being rife with the signs of the turned artists.

Jimmy worked with U2 on Rattle and Hum, a GREAT album. Their next album was Achtung, Baby! an album that I’ve listened to thousands of times. Post awakening, the album covers scream that they’ve been initiated.

Tragic Kingdom is what Jimmy produced after Gwen was traumatized by her breakup and had enough negative emotion to write great music (as a 90’s girl, I firmly stand by this statement).

Their next album? The Return Of Saturn. Everyone in this community has no doubt (see what I did there?) seen the pics of Gwen at Marina Ambramovic’s dinners.

In the early aughties, I saw No Doubt open for U2. It was a pinnacle experience for me with the exception of the performance of the song “One” by U2, which was on the Achtung, Baby! album. During this song, they projected the names of everyone who had died in the twin tower attacks onto a huge stadium screen. Even pre-awakening, I flagged the event as “off,” nefariously hypnotic, and incredibly intrusive to an otherwise delightful evening.

Nothing U2 did after Zooropa was good, the soul was gone but at least now I know why. My personal awakening was heartbreaking in so many ways, including realizing my beloved childhood crush is a Klaus Schwab cronie douchebag, void of the beauty woven into Unforgettable Fire and Joshua Tree.

Anyway, the end of The Defiant Ones culminates in what I now know is a huge Satanic event where the who’s who of the cabal is at Iovine’s second wedding where the bride is wearing a black dress.

It would be interesting to watch the series now through the new lens. Gwen is in it. Thanks for sharing this album cover, it just makes so much sense.

Thanks, anxietytiger. I think that Hollywood A&R scouts are mind-controlled by their masters with the intention to seek and sign not necessarily the most talented artists but the ones most naive and easy to groom. U2 and No Doubt having an album or two under their belt and some world-wide recognition was enough to build their confidence in the false-white-light entertainment industry, and all that A&R and other record execs had to do was perpetuate their artificially inflated success. It’s quite tragic, actually.

I mean, I lived as a musician/songwriter in Hollywood 1990 – 2006, long enough to peel back the glossy veneer of the entertainment industry. So I speak from experience about the reality of “the casting couch” (I never laid on it, and also got myself out of a very scary situation involving said couch!). Then there is the gross amount of pay-to-play torture, nepotism, favoritism, and ripping-off of genuine artists like myself and my now husband.

I don’t want to sound bitter, but I’ll say flat out that — in retrospect — I was programmed throughout my childhood and especially in my teens and twenties to believe that I had as equal a chance as anyone of getting signed to a lucrative multi-record deal and living the life of a “successful” artist. What a load of utter crap that I had to clean out of my body/mind/spirit complex! Seriously, it took at least seven years living far outside of Los Angeles for me to let go of “The Dream.” I had finally woken up and there was much more work to do.

@caligirlwonders, thank you for sharing! I’m grateful you got yourself out of the scary situation and are on a healing journey. Your perspective hits me in an interesting way. I had a life coach business for five years where I helped young artists “remove success blocks.” Of course, I had the best intentions and some of my clients went on to make comfortable livings with creative endeavors.

But as I read your reply, I feel an internal conflict. I have that engrained “we’re all worthy of making it,” and I’ve recognized over the past few years that the driving force behind wanting that to be true is from a dark values system. I put down my business because I was driven by warped values in the coaching industry (BE A MILLION $ COACH screams every social media ad), while I was helping people move from trauma usually based in parents not being present in one way or another. Meanwhile, I was preoccupied by “pursuing success” while my beautiful son was staring at me staring at my phone. It was clear what I had to do.

I’ll be sitting with this exchange for a while. It’s important meditation, especially as I prepare to go into the belly of the woke beast in a Ph. D program for clinical psychology this fall (in Montecito… I’m not sure what direction you took when you left LA, but maybe you’re familiar).

I’m so sorry you and your husband were ripped off. Art is here to make sense of this world’s madness. I sense the values shifting in this world, and the continual lifting of the veil can reveal a path for artists not warped by sinister values. I love California, keep fighting the good fight over there. We just left due to military and it’s refreshing to be in a red state, but heartbreaking to leave the central coast smell.

@anxietytiger, I deeply appreciate you sharing your story. I’m sure that your intentions were good while doing life coaching with artists and that your clients took your wisdom to heart. I myself met many mentors in Los Angeles who had big hearts and great advice, and were also talented artists themselves.

What is clear to me is that all full-spectrum human beings have the innate capacity to open their senses after a life of hypnosis if they choose to, and it sounds to me like that is exactly what happened to you. Looking at your child, the most precious gift to Creation from your own life, certainly was your catalyst to major change for you and your family.

I returned to college in 2012 to complete a B.A. in Communication Studies, and I can say it was a fabulous, eye-opening journey. I really loved every minute of it, even — or maybe especially — when it was difficult. I know that I made great contributions to the students AND professors, both personally and academically. Having *fully lived* life prior to that, I went in with a strong sense of self which afforded me the kind of confidence that none of them had (well, except for one instructor in my department, and of course he was my fave!). I know that you will go into the belly of the woke beast fully aware and slay it if necessary, haha!

Another aspect of you returning to earn your PhD in Psychology is that, as society experiences more and more death and devastation due to people’s unwillingness to face the hard truths, we will definitely need more clear-headed, big-hearted psychologists like you.

My husband and I live in Atascadero, just north of San Luis Obispo, so you and I were less than a two-hour drive from each other while you were in Montecito! If you’re traveling through the area again, I would love to meet you sharine777 [at] gmail [dot] com. I’ll keep our little “pocket of freedom” town as free as possible for your visit!

We were stationed in Lompoc!!! I was grateful that Pismo and SLO were much saner during the pandemic than SB County, I was up there a lot just to practice smiling at people. I’ll contact you offline. Grateful to connect. <3

It’s all so very Balenciaga…