The 2022 football (a Masonic game in origins I believe) World Cup Final stadium as seen from above clearly depicts a reptilian/snake eye, with scaled skin and even has eyelids. With the eyeball in the middle being created with the pre-game ceremony fire-works (or the middle circle of the pitch when the pre-game ceremonial stuff is removed).

This was obviously planned and aired to all coverage across the world, and shown many times (for a few seconds each) right before the final kick off. It reminded me of the Vatican building (inset bottom right) which clearly looks like a snake from inside and out.

In this World Cup 2022 TV Opening Intro, there is a hint indicating the final 2 teams and the winner. Broadcast before it even started.The closing ceremony is also creepy, with one singer looking like the Hindu KALI 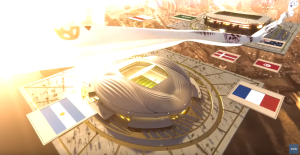 its normalized now, like chemtrails, if you don’t point it out to people they won’t see it and then, 8 out of 10 will give you the look.

Anyone saw the final? or The World Cup? It was so obviously rigged, It was even shocking. Everything was done for Argentina and Messi to win. You can’t even watch sport anymore, so SAD

it’s been like that for awhile, last year, the LA Rams “won” the superbowl. Significance see their colors. And then connect the dots, it’s fun👍