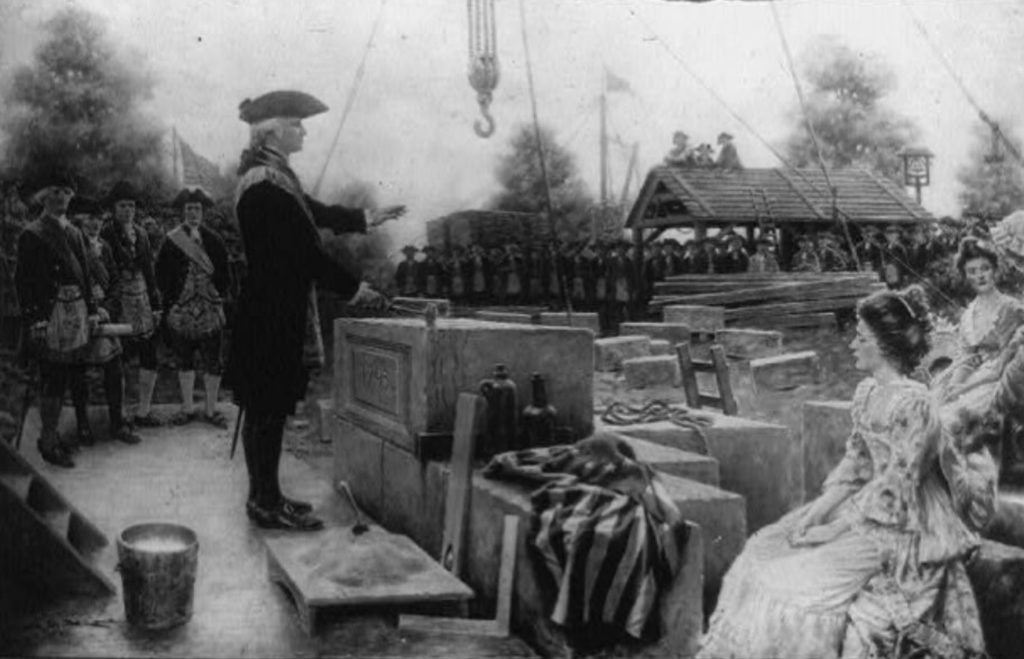 The laying of the first stone of the United States Capitol and its Masonic Ritual:

At 10:00 a.m. on September 18, President of the United States George Washington and his entourage crossed the Potomac River to arrive in the city of Washington. There, they were joined by an escort consisting of the Alexandria Volunteer Artillery, and members of Masonic lodges from Virginia and Maryland, and proceeded to the construction grounds approximately 1.5 miles (2.4 km) away. At the site of the Capitol, Washington was received by Joseph Clark, the Grand Master of the Grand Lodge of Maryland. A silver plaque, fashioned by Georgetown silversmith Caleb Bentley, was handed to Washington, who stepped into the foundation trench and placed the plaque, whereupon the cornerstone was lowered. The plaque was inscribed with a brief tribute to the “military valor and prudence” of Washington, and dedicated the building in the “first year, of the second term, of the presidency of George Washington … and in the year of Masonry 5,793.”

Washington, accompanied by three Worshipful Masters carrying sacrifices of corn, wine, and oil, then struck the stone three times with a gavel, as prescribed by Masonic custom. Washington exited the trench to ritual chanting by the assembled Masons and a 15-gun salute (one gun for each U.S. State) from the Alexandria Volunteer Artillery. Clark then delivered a short invocation, after which a 500 pounds (230 kg) ox was slaughtered and roasted.

Many of the items of ritual paraphernalia used in the cornerstone ceremony have been repurposed and are currently used for the placement of foundation stones at other important buildings in the greater Washington area. Centennial and bicentennial observances of the U.S. Capitol cornerstone laying were held in 1893 and 1993, respectively, and a tricentennial observance of the ritual has been announced for 2093.

What did they sacrifice on the other dates?

Manly p hall wrote about how the founding of America was an Illuminati experiment. It was never about freedom or God.