The earth symbol used for these pandemic events is designed to mimic exactly ancient stone engravings of the “flute man” who is of course Pan. 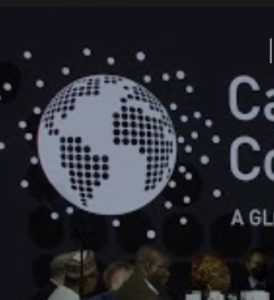 The greyish blue which is the water is specifically altered to mirror this form of the flute man, found across the world. 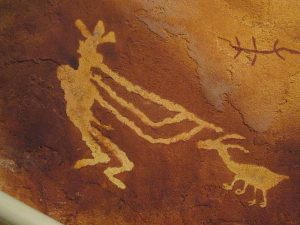 It should be noted that the flute man is highly symbolic of Lucifer, as ancient shamans used the flutes music to enchant their audience and lull them into a trance. This of course carries forwars through classical antiquity and into modernity through PAN, (PANim the man of many faces) who plays the flute to ILL-luminate and enchant his victims. 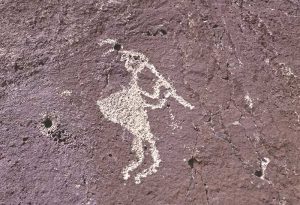 Here is a rock carving that dates to at least 10,000 YPB, shoeibg Pan with his horns, flute and erect fallus, just as pan is shown in antiquity and Baphomet is shown today. 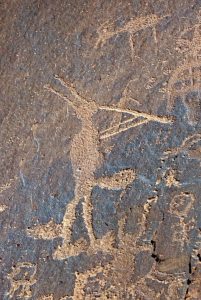 Note that the first and third images show the erect fallus, while the middle one shows the body of a TRAPEZOID, which is representation of the female Ma’at the weigher of hearts and keeper of divine order in Ancient Egyptian, and this has no fallus.

This exact type of trapezoid, a right triangle trapezoid, was commonly depicted with Ptah standing on it, the Egyptian creator deity who was the “patron of Masons.” That is “The Masons (Ptah) stand upon the divine goddess of Luciferian Order Ma’at.”

This plan for an NW0 goes back so very far, tens of thousands of years, and here with their world logo, featuring PAN, the same as the one for Event 201, tells us exactly who is their master. 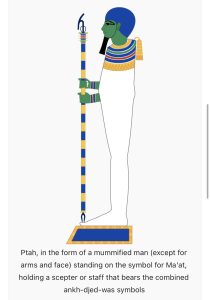 I can see it being Ma’at! Egyptian Goddess of balance and “order over chaos”. Did a google search of “the divine goddess of Luciferian Order Ma’at” and found the linked reference below in the book Ancient Paths by Jessica Jones, which you (444Gem) might find interesting…

BTW: Bill Gates is a major funder of the Lucis Trust, which was originally the Lucifer Publishing Company, established by Alice Bailey in 1922: “The ancient myth of Lucifer refers to the angel who brought light to the world…” An organization with ties to the UN, and a continuation of the teachings of theosophical founder, Helena Petrovna Blavatsky, publisher of Lucifer: A Theosophical Magazine…

Johns Hopkins first used that earth symbol for the Clade X pandemic exercise in 2018 (held exactly 666 days before the WHO declared the coronavirus was a pandemic). In the simulation, Clade X was a genetically engineered bioweapon virus, released globally by a group calling themselves: “A Brighter Dawn”. The aim was population reduction…

The 666 days connection between the Clade X Pandemic exercises, where they first used this Pan Flute Earth symbol, and COVID’s pandemic declaration is an excellent piece of time differential and symbolic tracking. Thank you!

The 266 th Pipe entered Americas Congress on the 266 day of the year 266 is the gestation period of Rosemary’s Baby.

Interesting that the scattershot coming off both globes (small displaced dots) are identical patterns in both images as well. So, the Pied Piper blankets the earth to lead away a portion of the earth’s inhabitants, into their own demise.
On the western half, there are 15 dots, most concentrated in the northern hemisphere 10:5.

On the western side, all but 4 are trapped within the curve of the C – is that coincidental stylization? Maybe. But as that branding came first, I’m thinking no, and that the later C for Event 201 is implied.

The majority of the eastern side emit from the opening center of the C – so China, down throughout Israel and Africa, which have suffered some of the worst medical and economic tolls.

The most obvious association with the C is caduceus, symbolizing medicine, trade/commerce and “messenger”. Caduceus is Mercury’s (Moses’) staff with one additional snake intertwined – the left-right aspects of Medusa, and her blood, which from – the left can kill, the right can heal. I woke with another C reference clearly in my head and wanted to write it down but I was so tired I fell back to sleep.

Ptah (Osiris) often holds the ankh, djed and was scepter together as one, just beneath his chin and in exact alignment with his spine, which says (to me) he holds dominion over the power of life (electromagnetism) affecting all things, drawn down from the heavens, through the (backbone – djed) channels, into the underworld and back. That he stands on Ma’at, like the Masons, means he exercises these powers (and rights over the world and inhabitants) justly (without favoritism – blindly), for order and divine justice.

If Pan, the Pied Piper, has the body of the trapezoid, then Pan is the embodiment or right hand of Ma’at, he is the one who plays a merry tune and lets what’s in each man’s soul determine his fate and whether to follow or no. (Fiddling whilst Rome burns, eating, drinking, marrying, etc) This way, their hands are entirely clean as they did nothing (in their minds) except arrange the circumstances and allow justice to serve itself.

In deed, the pride piper is calling.

In this case, he seeds the rats, then the desperate people offer him the keys to the kingdom in return to make them go away.

He leads the rats to the ocean, and in turn takes all of their children away from them through health tyranny and total digitalization of society.

This is a really insightful understanding and explanation using fractal thinking. Thank you so much Igageharleya.

A E your grasp of mythology has truly gone next level wow. Nice work!!

Haha, thanks, kwon 🙂 Doing some extra listening, Lady of the Library on youtube, not only is her voice intoxicating, she is a wonder of reachable understanding. I listen as I’m on deliveries. 😉

From a designer’s POV: the concentration of virus particles over various regions may represent the population density in those areas… China was definitely pandemic “ground zero” and the “top target” for the SARS-CoV-2 virus. There were several reported cases of Coronavirus-type infections at the Wuhan Military World Games, which started on the same day the Event 201 simulation took place in New York: 18th October 2019. Wuhan Military Games participants from all over the world then returned to their home countries, carrying the infection with them, spreading it globally…

While the Luciferians may view the release of these engineered plagues as some kind of judgment, unfortunately, whether one has knowledge is the deciding factor to survival, rather than having a “good soul” (Good people and all the Christians I know still blindly took the vaccines)… Anyway, really interesting to read your (lgageharleya) and 444Gem’s thoughts on the “hidden” symbolism you may see…

There’s no population reduction except that they know the vax will kill quite a lot but the exponential nature of population growth will outdo the deaths quick enough. Pharoah NEEDS a s large a base of slaves as possible in order to rise to. Dizzying heights.

We are in Robotics times, no need for human labor.
The vax will destroy human fertility, also do not forget Georgia stones population target

Peter Pan whose the puppet master behind the scenes is Lil Oannes. (illuminated fish man)

The evil people always practice before unleashing their plans