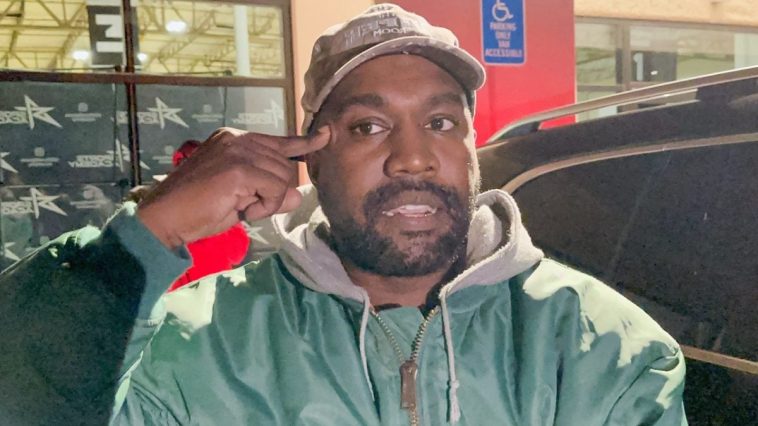 Kanye West has revealed that he believes the death of his mother, Donda, was part of a large plan for “Hollywood” to “control” and “traumatize” him…I think his mom was more than likely his sacrifice to the industry, that was the plan imo. I could be wrong but they keep letting him expose certain things like this,why? He would be killed. Mabey a bigger picture here for sure if he remains alive. I don’t think they will even let him be reprogrammed at this point if he is exposing this much. Time will tell.

Learned Elder of Zyklon B

Say what you want about Ye but this man is a prophet. After decades of playing their games and fooling with him, he woke up and now he is exposing all the filth hidden underneath the glitch of entertainment industry. They humilated him in every possible way. Even his marriage with that witch kardashian was arranged by his handlers. Now, when he risen up with sobriety and clear mind, he will show us what’s up with the hollyweird and their mind controling machinery – modern day slavery. Babylon is falling and Ye is in our team. The real crystal nights are coming, this time it’s going to be apocalyptic. God bless and protect Ye.

Dan
Reply to  Learned Elder of Zyklon B

By the way, he’s Anti-Semitic. Just thought I’d remind you.

No he’s anti-Ashkenazi Jew(fake Jews;do some research) and khazarian mafia Jews(also fake Jews). In ancient times these 2 groups were ran out of countries for their conniving ways and blood lust for wealth. Also noted numerous times were their strange rituals involving children. The blood cult of Baal. Those are the “Jews” controlling the world narrative for centuries! The money changers and pharisees that even Jesus spoke out against. Guess Jesus must have been an anti semite by your assertion lmao

Learned Elder of Zyklon B
Reply to  Jon Townsend

don’t even bother to reply to Dan, he’s obviously troll or he’s just dumbed down

Well Kanye didn’t quite specify that did he? He just said death con 3 on Jewish people. Where was the clarification on that? Sure there are bad Jews as there are bad people in every culture. But where is the proof he was targeting a specific set of Jews? Provide proof of that instead of having a public meltdown 🙂

He also thinks he’s somehow a “real” Jew with this black people are really the Hebrews nonsense. Give me a break. Kanye is also a Hitler sympathizer. Guess we forgot about that too?

Learned Elder of Zyklon B
Reply to  Dan

He is Talking about these false Jews
“I also know the slander against you by those who call themselves Jews and really are not, but are a synagogue of Satan.”

Happymeal
Reply to  Learned Elder of Zyklon B

Please, Do not have high expectation, you risk as usual ending up disappointed.
All these people are at the end professional entertainers.

lgageharleya
Reply to  Learned Elder of Zyklon B

They keep shoving him into their “upside down” shooting him up and shocking the “monkey” but just like a beach ball you hold underwater, release it and it keeps shooting back up. The farther down you shove it, the higher it shoots forth.
He is a problem child, but he is also their problem child, that’s why they hag-ride him so hard.
He has fallen for the last temptation of Christ – if he can conquer that, he may be able to see clearly enough to stumble his way back out.

Why is fantasizing about his death what comes to mind instead of him being a key player in taking them down?

The powers that shouldn’t be are not gods even though they think they are.

They do tend to kill people that expose the truth though, as I’m sure you’re aware of. They might not be gods but have your forgotten their surveillance programs, the extent to which we don’t even know? They have technology that can cause heart attacks and other deaths undetected. That’s why I’m unsure about Kanye’s intention, if he was a true threat why would they let him live? I’ve noticed the truther community lately is expecting a savior like Trump, or Musk, or Kanye but the truth is they’re all co-opted. We need to come together as a community instead of waiting for a rich person to save us

They took out Issac Kappy within 3 days of him exposing what he knew. They are letting Kanye live. I’m still on the fence if he isn’t seen as a threat ot it’s part of something else we don’t know yet.

“They monetize and traumatize”

Good to see that he has zeroed in the the key word “trauma”. Really is the core tool of the ancient bloodlines.

Finally this gets admitted!!! RIP