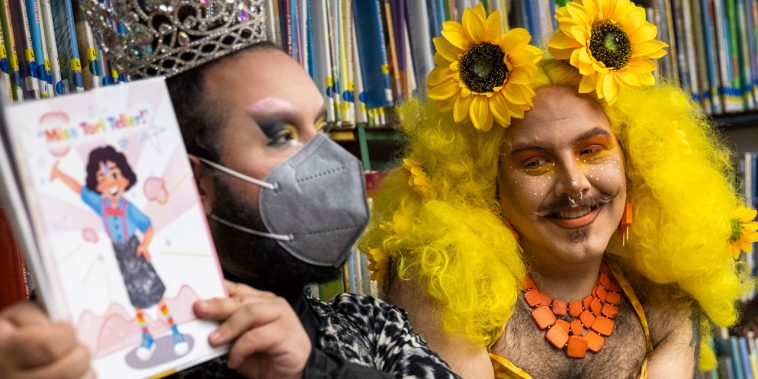 Aimed at children, the phenomenon is far more subversive than its defenders claim.
“… The drag queen might appear as a comic figure, but he carries an utterly serious message: the deconstruction of sex, the reconstruction of child sexuality, and the subversion of middle-class family life….”

can anyone explain the hideous eye makeup these men always have? It is pervasive and always gaudy in this particular way and I think it is probably meaningful. any insight is greatly appreciated.

That’s what they think of women. They see women as objects for nothing more than their own pleasure. They are frequently autogynophiles, meaning they like the way they look as women, so they think women should look like these…things…in order to be sexually pleasing.

The author notes from his research that mockery of ‘normal’, and in fact revenge on ‘normal’, is being demonstrated; revenge is their imperative. They find zero pleasure in – have zero respect for – actual women, but instead revel in the humiliation of womanhood. So I surmise that the ‘normal’ they themselves experienced early on was horrific. I suppose they are mocking women to exact revenge for women not protecting them from predators in their childhood; maybe they’ve been preyed upon by women & men both. “Erasing actual manhood & womanhood” is the “T’s” imperative.

The author also notes they are intent on deconstructing “normal” in ‘society & culture at large’ in order to recreate it in their own image. Also, to invert the hierarchy of social strata; “… The most despised sexual castes currently include transsexuals, transvestites, fetishists, sadomasochists, sex workers such as prostitutes and p**n models, and the lowliest of all, those whose eroticism transgresses generational boundaries…. Rubin’s project—and, by extension, that of queer theory—was to interrogate, deconstruct, and subvert this sexual hierarchy and usher in a world beyond limits…. A radical theory of sex must identify, describe, explain, and denounce erotic injustice and sexual oppression. Such a theory needs refined conceptual tools which can grasp the subject and hold it in view….”. Grasp & hold a subject in view… just like the train wreck that it is.

“Normal” is relative to one’s own personal perception, and they apparently perceive their subversion of ‘heterosexual-normal’ is an improvement or ‘better’ than their own previous experience of their ‘normal’. IMO this is their rageful cry for compassion – demanding the acceptance, acknowledgement & attention for themselves they never got; demanding “inclusivity, equality, affirmation, etc.” is childhood needs chronically unmet. Inflamed Pain Bodies run amok captaining the ship. The microcosm is the macrocosm; most world (mis)leaders are being exposed lately as Truly narcissistic, sociopathic, psychopathic, or all the above… their early & very early experiences – and lineages – are relevant in exactly the same ways.

Gestational, infancy & childhood trauma – and generational/family lineage patterns of trauma infliction – really screws people up… though in myriad different ways, depending on unique circumstances of both internal & external factors. **The roots produce the fruits.** Show me the complete & accurate history of a deviant (including the lineage & Akashic) & I’ll show you where this behavior comes from. “Revenge” fits with having been preyed upon as ‘normal’ when small, captive, & powerless. Granted not everyone who experiences abuse &/or complex trauma adapts along the same path… there are many expressions of this experience; the root gives rise to many branches.

Think of these children now being used & abused in this way *publicly* by these deviant malcontents … as well as the multitudes who look on silently… that hasn’t happened before on such a scale that I know of. We know that humiliating & abusing young children in private, in the home &/or in extended family dynamics produces people who very often go on to have severely distorted adjustment & relationship patterns; many commit egregious acts driven by unresolved rage. What kind of rage are these “drag kids” & “trans kids” going to exhibit if/when they are adults? We know nobody is documenting their suicide rates accurately; we’re also choosing not to see their (anybody’s) early histories & traumas as red flags. I mentioned in another comment about finding the seeds of all this… the roots give rise to the seeds also, as the fruits carry the seeds for more.
Healthy or unhealthy seeds here???
One of my spiritual teachers is fond of saying “If you have a problem & don’t know it, don’t worry, it will get bigger.”

The article the link points to is just so long. I think parents all over the world should strike back at these perverts. Keep our kids safe

“There are a thousand hacking at the branches of evil to every one who is striking at the root.” –Henry David Thoreau

Clear perception & understanding of the problem in all it’s aspects is required to effectively “strike back”… and to gain that clarity & understanding, an attention span is required to perceive all the parts – especially the roots – of that subversive system that works as a whole to function as intended. This Trojan-Horse-social-engineering-extortion-racket-monstrosity is so successful that it’s now consistently federally funded AND being exported internationally by the MIS-leaders in ‘the federal government”. Here’s just one article I found lately confirming your accurate ‘all over the world’ observation:
Report: Biden/Blinken State Department now funding drag queens for kids shows in Ecuador… “… Pushing drag shows and homosexuality on the Third World is one of Blinken’s top foreign policy objectives….”
AND “… The grant to CENA is part of the State Department’s public diplomacy program, which seeks to “support the achievement of U.S. foreign policy goals and objectives, advance national interests, and enhance national security by informing and influencing foreign publics and by expanding and strengthening the relationship between the people and government of the United States and citizens of the rest of the world,” the website states….”

The ‘so long’ article posted here reveals more than a century of history to consider – and the comments offer even more insight to the history; always wade through the comments of expos’es like this… we can learn as much or more from the defenders as from those who oppose the movement. Mental illness? Yes, without a doubt; there a lot of dots to connect to understand that scourge as deliberately engineered as well… here are just two of many:

The Deliberate Dumbing Down of America ( 1999, Charlotte Thompson Iserbyt http://deliberatedumbingdown.com/ddd/ ) is also a long read {free to download} and also worth the effort… to both understand one aspect of how our general citizenry has become so obtuse and as an exercise to reverse that.

Bonus article: https://www.winterwatch.net/2022/10/the-influence-of-sabbatian-frankism-on-the-world/ “… The Frankist “believer” had an inverted, deceptive belief system. One must not appear to be as they really are. The last belief justified its followers’ pursuit of the double lives they led….”

IMO, developing your attention span is worth the effort. Understanding the methods and the working parts of a system reveals the path out from under the problem.
Corruption carries the seeds of it’s own destruction. Our task is to investigate deeply enough to find those seeds & leverage their destructive power.