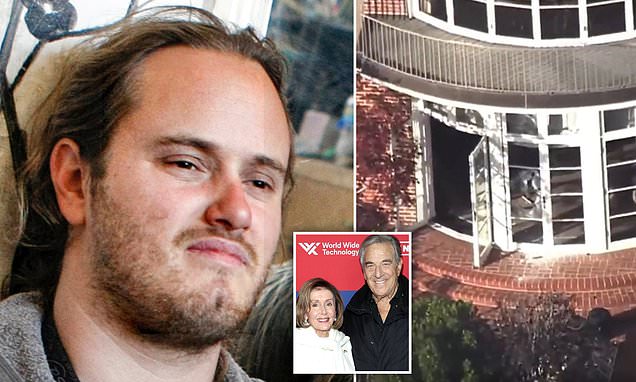 Sounds like the Dems want to make way for new blood. If Nancy doesn’t retire soon, she will be removed.

How do we know it’s gaslighting?

The name David dePape is a dead give away he was a controlled Patsy. We are between the two pillars of Jachin and Boaz right now (The lunar and Solar Eclipse), and this is another of the planned events in sequence.

As you know, in PIE, indus valley and several other languages, Pape/Pepe means “Sin.” and of course in latin is “Papa” and in English is “Pope.” which means Father (hence why the catholics make adherents call them father in direct contraversion of the words of Yeshua), this name being in reference to: DEUS PATER
“Dei” in these languages references Zues, or DEUS PATER, The Sky Father, who is Odin. It also means “of” in Latin

The name David of course meaning “The One with Sight”

The name in total is “Deus Pater, The one with Sight of Sin.”

The gematrias are full of 666s in obvious variations. Image below.

Chief Scott said in a news conference that when officers arrived and knocked on the door of the Pelosi home, the door was opened “by someone inside.” Officers observed Pelosi and Depape inside the entryway of the home. The officers remained outside of the threshold. They observed both men, each “with one hand on a single hammer.”

Officers gave commands to both men to drop the hammer. Officers entered and tackled the suspect and took him into custody. “This was not a random act. This was intentional. And it’s wrong,” Scott said. He praised a dispatcher as a hero for sensing more was going on than Paul Pelosi said in the 911 call; he was talking in code.

The motive is still being determined. Both men were transported to a hospital for treatment, Scott said. Depape is being booked on attempted homicide, elderly abuse, burglary and other charges, Scott said.

On a blog, Depape ranted about censorship by the “elites” and “ruling class.” He also appears to have a website that reads “da Jews.” Sixteen hours ago, he posted the headline, “Why Colleges are becoming Cults.”

Some of his posts referred to Donald Trump. “Either Q is Trump himself or Q is the deepstate moles within Trumps inner circle. So Q/Trump sabotaged their child trafficking operations. #2 self inflicted wound. Trumps covert id or a Deep state mole? Was Q refering to this? Did Q do this?”

In another post, he wrote, “The more Ukrainians die NEEDLESSLY the cheaper the land will be for Jews to buy up.” His website has posts on pedophiles, aliens, COVID, Communism, Kanye West, Derek Chauvin, what he called “climate hysteria” and more. It is filled with conspiracy theories and other ramblings.

He also had a Facebook page, but it was taken down.

Complete gaslighting. Sounds like the Dems want the old guard gone. Also, they want to paint anyone with a clue what’s really going on in the world as dangerously crazy.

The dragons have always gone out of their way to create polarisation aroubd the issues, and to control the “Truther,” narrative by using their pasties as straw men.

Vancouver is one of the main centers for MK Ultra indoctrination, as it sits outside US jurisdiction but is essentially a client city state.

Good expose on the basic use of Canadian soil for experimentation from the period of Mr. Depape’s childhood.

Nancy had the authority to let people in or keep people out of the capitol on Jan 6th. Therefore, Nancy opened the door to let people inside. If this story about her husband is true then she reaped into her own house what she sowed into the House of Representatives.

Maybe, if it was an actual event, but to me it feels more like farce, playacting, to advance a narrative.

I’ll tell you why this is planned.

#1: they ID the perpetrator quickly
#2: they caught him quickly and swiftly
#3: there’s information made quickly available to media
#4: too easy an opportunity – you think any homeless person had access to Nancy and Co. this easily? They would have been targeted far too many times.
#5: FBI or gov agency takes charge to control investigation

Now why did this happen? Its anyone’s guess. It could be to enhance her security as she’s seen a flurry of hate and this allows more spending to protect the old b***h.

To remove her from power? Maybe.

Being a rogue agents? A warning from puppet masters for disobeying orders, ala Sadam Hussein or Qaddaffi.