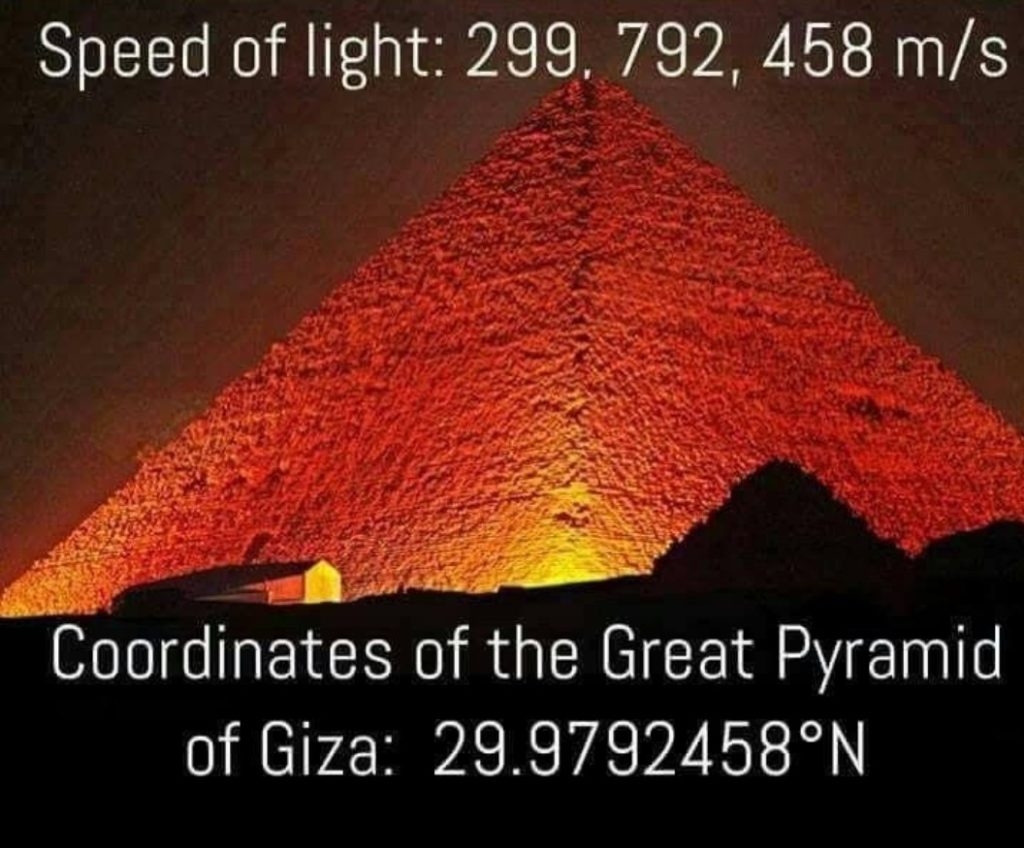 That is an absolutely amazing ‘coincidence’, thank you for sharing.

Went off to check this and all I’ll say is if Full fact think it’s bullshit – there’s something to it lol.

The one point they make is there are lots of lines of latitude going through the pyramid but it is still of interest to me that that particular line runs through it.

They also say these are not coordinates cos there is no longitudinal calc.

A E
Reply to  Rosey

I’m with you, Rosey. Something being “fact checked” makes me give it more credence.

The narratives of “science” and “history” are the fallen ones’ mystery school hiding in plain sight.

The Ain Stein (the Eye Stone) was placed exactly at the latitude line that coincides with this figure.

The degrees themselves are a natural division of a circle (360, 90 per side per hemisphere) and meters are exactly the average distance from foot to elbow of all humans when the pyramids were built, as well as exactly a 1/10^7 proportion of the distance from the North Pole of Earth to the Equator. A way to ensure that mathematical constants were able to be found despite obfuscation of knowledge.

The NW0 specifically chose to define the meter to the distance of light traveled in a vacuum for 1/299792458 of a second in order to align with this figure.

Thank you for this. I always knew that they were defining the terms of science per ancient knowledge. Can you provide a book or source for “Ain Stein” – all I see is mechanical pencils on a search.

Type “Thirteen” into your search box and read the series “Thirteen Monkeys” from chapter I. There are innumerable links that will help explain.

Let me consider which books can best help you on your search.

I’ve been meaning to do that for quite some time now!

The first in the series doesn’t show up I don’t think, because it’s title is, Elite Change Oscars Mall to OVATIΘΝ You’ll want to start there.

Interesting. I’ve been thinking of an other theory, which would be that time like we know it would be a perpetual loop. I would love to read from you about time as it is such a complex problem (for the human mind).

The nature of time is indeed looping, the 888, the analemma. It is a two dimensional representation of a four dimensional double Taurus cubo octahedron that repeated across all scales of magnifications. This fabric itself is what allows for scalar waves.

If the fine structure constant was even .001% different, the entire universe would never have developed matter, and would simply be a wash of energy. No galaxies, No stars, No Planets, and No us.

This concept and number is baked into the scriptures of Genesis in the 37th word that starts the 137th letter of Berashid (Genesis):

הָא֖וֹר which equals 212 in Gematria the exact degrees of water boiling in Fahrenheit. Fahrenheit itself placing a 1/2 circle, 180 degrees, directly between the boiling and freezing point of water 32 to 212.

This word is said “ha-or.” It means “light,” although English does not capture its meaning. It is the word stolen by the Luciferians to make names for their pagan thunder gods like Thor, Kur, Oranos Orisha etc.

And God saw the light, that it was good: and God divided the light) from the darkness.” Gen 1:4 this is 5, the number of materiality, the pentagram, in which angle is 72 degrees.

1/137 is .007299 and this is why the ancient Sumerian myths say there are 73 names for Marduk, the sun. It is one reason 72 is inscribed throughout scriptural mathematics, along with being the number of years for 1 degree in the profession of the equinoxes.

The 13 monkeys explains the looping of time. The ancestor is the descendant.

It is why Sumerian appears like English: DINGIR IM DUGUD is the name of Lucifer, a clever device baked into the language.