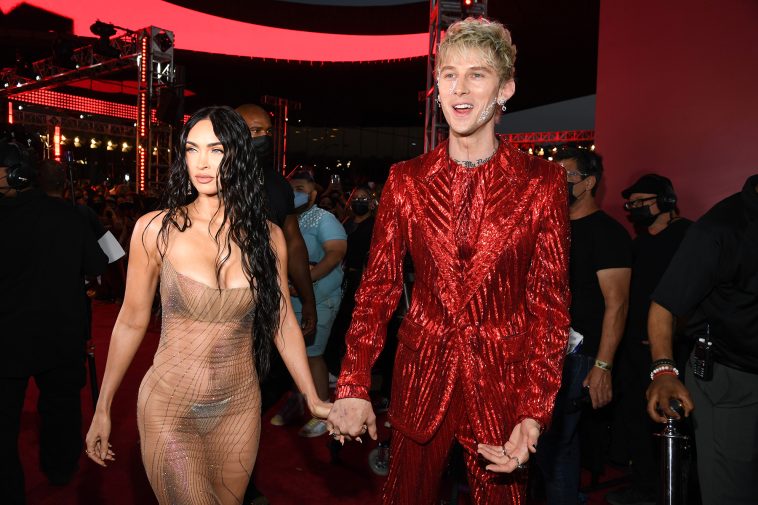 No, they are not trying to convert the youth of America to Satanism by drinking each other’s blood — they’re just Hot Topic-core weirdos

Absolutely amazing their entourages all still are fully masked while none of the ‘stars’ are. No one questions this at all?

Right?! Been like that the whole scamdemic. It’s “they” mocking you in plain site and telling you it’s complete nonsense.

Yeah, heh heh, except when previously healthy adults with no comorbidities suddenly spike baby-high fevers like 106*, start happily babbling, unaware they are actively dying as their SPO2 is 34%, and they code multiple times over the course of a months-long hospitalization while others inexplicably die around them, it’s almost like *something* may actually be amiss..? If not, that’s one really potent scam!

What’s wrong with you, Marie? Haven’t you watched iliketrees super compelling video? Nothing to see here, all the people dying are fools and simps. It’s not happening, because trees says it cannot be so. There are no germs, no DNA, hell, there’s probably no actual blood, it’s just a really convincing simulation. Are you breathing? Pshhhh! Whatever.
Or, maybe if trees condescends to cough up whatever acceptable word trees uses to describe what’s happening (if trees condescends to recognize reality that hasn’t yet struck their playroom) we can recognize that this is a real problem, killing real humans, I have seen it firsthand, it still wounds me daily, and trees’ offhand yawning smirkisms about it can be stuffed right back up where they came from.
Hi, trees? Please refrain from ever addressing me again, and I will do the same for you.

Many apologies to Simon.

And to VC/VL. I really tried to refrain but this bullying blindness is a bit much when you are watching a human being choke on their own secretions they can’t cough out. When you are watching surgeons drag 4″ long beachworms from chest tubes and are trying to insist these things are “cells, blood, purulence and debris” which formed fully taught strands within hours of the last removal. When a previously strong man can be pinned down by a heavy blanket. When the act of peeing into a urinal someone else is holding for him causes him to desat below 70% and he can’t recover for 45 minutes. Block me from this site if you will, I understand. I cannot tolerate this smirking bs any longer without response. I will not respond again to any provocation if you allow me to remain. I hope trees never has to see this personally to grow a bit of empathy.

I was told by TWO pulmonologists that my loved one with NO comorbidities, zero medications over the counter or otherwise MIGHT eventually become a candidate for lung transplantation IF we could get him well enough. Does that please you, trees? We’re just fools and simps?? He NEVER got the mRNA shot, so stuff that idea, too. Be GLAD you continue to breathe clearly.

A full year later and I STILL wake all hours, and if I don’t hear breathing or see evidences I place my hand to reassure myself. Do you have ANY concept what that feels like? Many I know are not so lucky, they’ve had to bury theirs. I, at least, get to still fret over mine.

I understand your pain. I don’t think trees had such an experience to see your point of view but we don’t even know what the experience that we are really experiencing truly is since our own gov does tests on us and has for many many years. DNA or not, I know I’ve got red liquid that comes out of my skin breaks, I know I’ve gotten sneezing sore throat after my brother coughing in me etc. I also know the vaccine for polio and polio itself was very fishy. As for your husband, I’m sorry you almost lost him. I actually have been through the checking if they are breathing with your heart in your throat hoping it’s just paranoia and it isn’t fun.

I never expected a soul to understand or to care. Just don’t fecking heckle me, like trees cannot seem to resist doing.

😂😂😂 I think it’s hilarious how triggered you are by this. It’s pretty ridiculous, and by the way, I don’t come back and read comments so I’m imagining that you’ve written lots of silly things to me in vain, and I suspect this is the case with everyone else you try to harass as well. If you want to be taken seriously, you’re going to need to be nicer to people and speak more intelligently.

Yes, being triggered by a loved one’s very near death while someone else says it’s all in your mind is a laugh riot. You “don’t come back and read comments” yet here you are. You don’t need to as your multiple accounts have already done your voting for you.
I don’t harass anyone. Look in the mirror.

Well her husband did almost die from whatever covid actually is, it’s not very funny, that’s actually mean she has trauma from it and is reacting from the energy put out. Maybe this is a gov experiment but you could link some new found information or something that isn’t 4hrs long versus every single post putting a disclaimer that germs and viruses are not real, even if they aren’t real and it’s all weaponized vaccines. I understand where you’re coming from but it’s lgageharleya here has had to watch her husband dying in front of her for months, then coming here you’re telling her he wasn’t sick enrages her because it brings up all those horrible emotions and tells her it was her imagination. Something is obviously killing people and it causes liquid in the lungs and strange clots.

Or when people who bought in on the whole vaccine grift suddenly die of “unknown causes” or get blood clots? Or unexplained fertility issues and especially painful or bloody menstrual cycles? You conveniently left those parts out while you were boot licking Big Brother.

Just stop it, trees. This is insipid and truly unbecoming, plus baldly false.

I think she’s trying to say it’s not her imagination that he got sick. ‘Sick’ however can mean a lot of things imo I really think it was an orchestrated attack and not natural at all. She’s upset because trees said there’s no germs or disease a few times and they both had a little verbal conflict earlier with no resolution so she’s not accepting the reply as she feels it’s insulting.

I’ve actively asked trees on more than one occasion to elaborate, but trees is always “too busy” although not too busy to post shitty comments in mockery.
I have already stated many times that this is a biological attack released deliberately. What does trees deem acceptable enough for me to paste as a constant disclaimer on every post I make regarding this definable illness so trees will leave me alone? Let’s ask Easily_Forgotten, as well, so Jeckel and Hyde can just answer the question together.

It’s really not enough that human beings have to suffer terrible pain and loss and witness excruciating suffering, no, we must belittle and berate as well. Call those who actually care enough in the medical industry to say no to this evil “bootlickers”.

I find the link between identity and the occult to be fascinating. Artists, actors, rock stars, and public figures all minimize their occult actions. When approached, they evade:

“I didn’t actually mean that.”

I think that “who we are” is the product of what we do rather than what we *say* about what we do. We are the sum of our actions. Those actions have meaning, and they reflect what we believe about the world. There are exceptions to this, but they don’t prove the rule.

It’s funny that we have to do intellectual cartwheels to express what your average simpleton already understands: Drinking each other’s blood is a witchcraft-action. Publicizing your witchcraft-action is witchcraft-evangelism. It ain’t rocket science.

So true. They always come up with nicely packaged ridiculous excuses why they aren’t fkd up when they absolutely obviously are.

They don’t even look like a couple. I just can’t see it.

Have you noticed that almost every liberal news outlet have removed their comment section? Just another way to try and normalize their point of view and silence any logical rebuttal or counter argument.