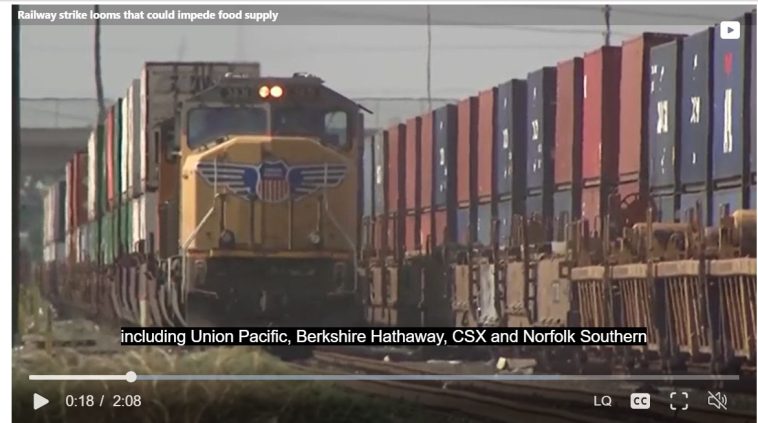 Amtrak and major regional train systems continued to encourage passengers to plan for alternate travel later this week as the strike threat loomed.

First article I can recall reading regarding a labor strike that doesn’t have a single union member quote, nor does it cite any labor concerns or grievances. Is this a strike, or a shutdown being blamed on the workers?

This is all that is mentioned: “Freight railroads and unions representing their workers have been negotiating a new contract as part of a longtime dispute over pay and working conditions, but have not come to an agreement. “

“Rep. Seth Moulton (D-Mass.), an advocate for rail infrastructure, called the unions’ demands “reasonable” and urged railroads to work toward an agreement that avoids a strike and significant effects on commerce and transportation.

“Given the fact that Amtrak has already preemptively canceled a number of its long-distance trains in anticipation of a strike, it doesn’t take much imagination to predict the mess a strike would cause,” he said.”

It links to an article that focuses on necessary farm resources and wheat as being the most impacted, with this quote: “If rail shuts down, our entire agricultural system shuts down,” Sen. Deb Fischer (R-Neb.) said in a speech on the Senate floor, emphasizing that her state’s farmers were counting on the upcoming harvest season. “The stakes of these rail negotiations could not be higher.”

And this – what a weird quote, an admission..?

“If it’s a day or two, it may not be that big a deal. If this went on for a week or two weeks, you’d see shortages of all sorts of things,” said Dean Baker, a White House ally and co-founder of the Center for Economic and Policy Research, a left-leaning think tank. “You’re going to have erratic shortfalls.”

He said of the White House: “They’re trying hard to do this but it’s really hard to do on the fly. It’s not like they’ve been planning this for years.”

This linked article mentions the reason for the strike as being the new attendance policy that’s hurting workers because of covid and ongoing mandatory testing requirements. So they have to take a bogus test and stay home if it reads positive whether they have symptoms or no, then they get penalized (in whatever ways) for missing work. Yeah, sounds like they’re not trying to force a strike to me.