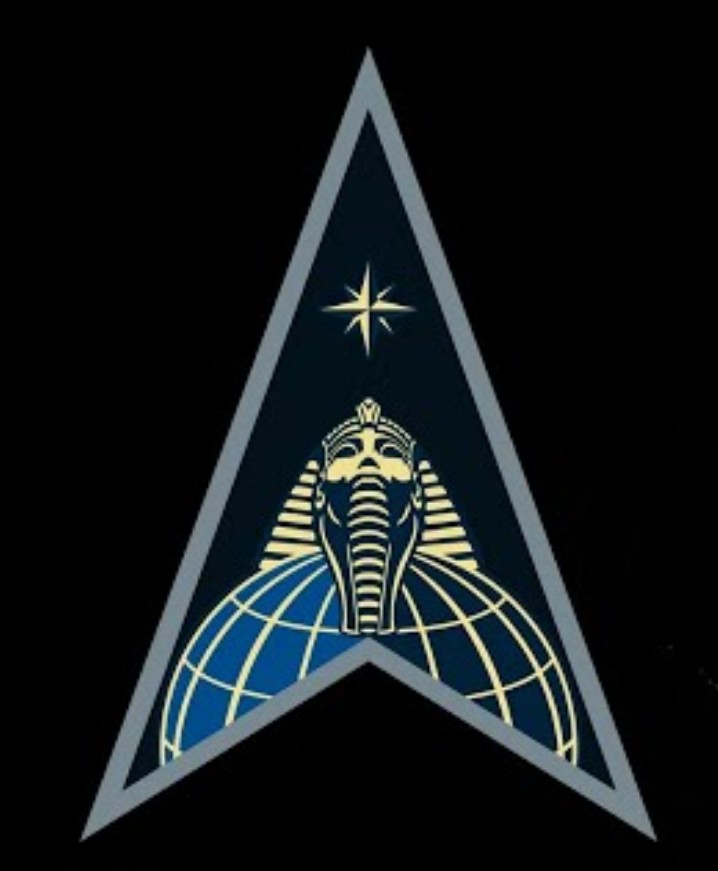 The new symbolic Delta 18 Space Force intelligence logo shows a pharaoh on top of a globe looking above to a star inside a pyramid.

Space Delta 18 (DEL 18) is a United States Space Force unit that serves as the National Space Intelligence Center (NSIC). It is headquartered at Wright-Patterson Air Force Base, Ohio and activated on 24 June 2022.

These people really are obsessed with numbers.

I’m sure the degrees of the two piramides mean something to. I think the ‘arrow’ is one point of a pentagram.

um, if this were the Egyptian Space Command, i could see it…
but a US Space Command ? ? ?
WTF? this *is* inexplicably weird…

I thought so as well

The depiction on this poster is of the Egyptian opening of the mouth ceremony (notice the Pharoahs mouth is open), which was performed by priests after the death of a pharaoh to allow his KaBa (inner soul) to escape, and travel along the cosmos to meet Osiris at the NASIr, the lowest point of the underworld.

The overtones of Revelarions 13, “ I saw a beast coming out of the Earth,” are clear.

The ones in power really are obsessed with Luciferian woo wooery

Further the triangle in the logo is an Isosceles golden Triangle intersected into three equal parts, where the angles are 36-72-72 and the ratio of the sides to the (invisible) base is 1:1.618. This is the exact golden ratio discussed in the woo wooery of chapter IX.

This triangle intersects a circle into 10 equal parts (360 degrees of a circle intersected ten times is 10*36 degrees) The Egyptians worshipping the Enead (ENE= 9 and the word for mirror; 9 being the most selfish number that always mirrors back into itself in vortex math.) the Enead being 9 gods that in the end birthed the 10th, Horus, the risen sun. This was the reference to Enedis of the energy company in France, as 9 10 (Ene=9 Dis = 10)

I’ve been trying some things but I have questions.
Can we email through [email protected] dot me

It does not look like an open mouth at all, those lines are part of the mask 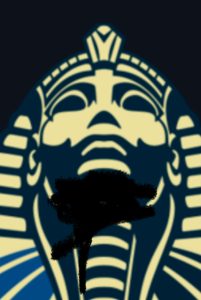 Do you see it is meant to show a serpent going through his head and emerging from the forehead? A mark of the beast of the Nahas, the Two faced Janus worshippers.

Now turn it upside down, and focus on the gold, and what do you get? Minu, the bird man, descending head first into the oceans at the North Pole.

He is shown, like Icarus, coming down to earth from a star and entering the waters of earth (look to references of the story of Atlantis, Atlas, and the descendants of Poseidon.) 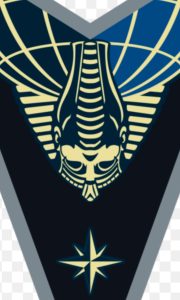 Like this? (Just the snake through the forehead part.)
That’s essentially denoting from what source focus, foresight, longterm goals, etc are derived for this person. 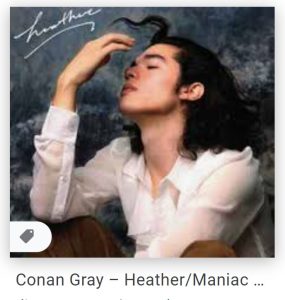 This is exactly the type of subtle depiction of the extension of the third eye, by serpent through the forehead often used.

It represents ILL-lumination from Lucifer, the Hanas slithering it’s way through the skull. Look to the depictions of Mithras and his starry cape and red tunic; and then compare to the Stars and Stripes and colors of all of the “Anglo” (meaning fallen Angel’s descendants) empires such as USA, Australia, Etc. This is the stars and stripes of Mithras (Re’s Mythos… the solar mysteries) they often put on hats or bandannas, representing those that have become ILL-limones in their brains, puppets to the WINners, the NW0.

The red hat from MAGA, which represents Μέγα in greek (great) and MAGI (magicians of the stars) in Babylon, represents the red hue of the Mithras cape, itself a representation of the veil of the burning sun in SUMER. Funding the meaning of summer, and its relationship to Jupiter will help you unravel all of Trump’s propaganda and its intended purpose. The clue I will give is the “burning heat of the solar fire” and its association with anger blindness.

This is why the Rothsch1ld’s payed such a hefty price for the tapestry of a unicorn giving birth, and why tech startups are called unicorns; magical beings with MAGIkal extensions of the 3rd eye working as an antenna for Electromagnetic Radiation and Lucifer’s enlightenment.

They are getting less and less subtle! This is in your face!

Let us examine their “explanation,” from the esoteric Luciferian standpoint and the gematrias embedded within. It reads:

“established June 24, 2022 in Dayton, Ohio. A new organization under Space Operations Command, the DEL18 & NSIC Vision is: “We are The Nation’s Space Intelligence Center – providing Progressive, Predictive, and Pioneering intelligence to outwit, out-reach and WIN in the space domain; Protecting America and its allies in Space now and into the future.”

2. Dayton Ohio’s Latitude sits at: 39.75N which is .4416666666 of the way between the equator and the north pole (39.75/90 degrees). this references the four Sis-Ons (seasons, the embodiments of the 6), the embodiments of every repeating 666 cycles become the 44, the cycles of the material four dimensions, the four horseman of the apoKALIpsis, the four times of day, etc. 44 being 8 the infinite loop of time: the Leviathan.

4. The Progressive, Predictive, and Pioneering is PPP (sound familiar?) and is in Jewish gematria: 60-60-60 (180, a semi circle, a reversal of position), in English Gematria: 96-96-96 (the chiral inversion of 69, the balance of time) and in Simplified English: 16-16-16 (444444, thats six 4s…), again we have the Sis-Ons being referenced, the embodiment of the six. The reference to “intelligence,” is in regards to the embodiment of Lucifer within the four material dimensions (AI).

5. The Gematria of WIN is in hebrew vav-yod-nun. From right to left we arrive at 6-10-600, making 616 the unique “number of the beast,” referenced in a single manuscript in which Yeshua is made to pray to the Sun, Helios. (the 600 comes from the value of “Final Nun,”)

the meaning of WIN from its letters Vav-Yod-Nun is “The Hook of God in the Snake.”
WIN is also the chiral inversion of MIN, which refers to MINu/MINj/MINa which references to the progenitor of the Serpent Seed, the one that descended, whose name is Minu. You will find references in Egypt to the first rules as Mnj, said Mennes. This is where the celebrity names Nike Minaj, Minni Mouse, Manu Ciao, etc. come from.

The reversal of the W and the M reverences in the direction, the M showing that Minu descende, the W showing that now his descendants will ascend. In the context of the Luciferian obsession with inversions, cyclical nature, black/white, and chirality, this should have clear meaning

The name NSIC reads esoterically “NahaS IC” with the C being a reference to the greek letter digamma, which makes an S or a Ksss sound. Nahas means “The Serpent.” the two phonetic meanings being:

NahaS Is (Genesis, the Serpent is) and Nahas ksss (The serpent hisses). The third English meaning as Nahas I See (The Serpent I See).