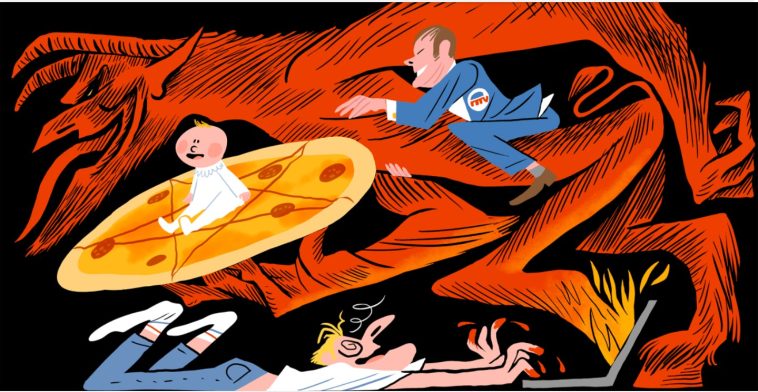 “The music video for Lil Nas X’s song “Montero (Call Me by Your Name),” which featured the artist giving the devil a lap dance, and a related limited edition sneaker, “Satan shoes,” which contained a drop of blood, invited shocked coverage from Fox News and condemnation from political leaders.

Conspiracy theories similarly engulfed the tragedy in Houston at the Astroworld music festival in November, in which 10 people were crushed to death as the rapper Travis Scott performed on stage. Social media sleuths gathered livestreams of the performance and pieced them together to come to an otherworldly conclusion: that the concert was actually a satanic ritual. The videos weren’t widely shared by devoted conspiracy theorists or religious zealots, but by mainstream Gen Z and millennial users.

This kind of participatory ferreting out of Satan from the popular culture and “raising awareness” of myriad threats to children — real and imagined — were a hallmark of the 1980s’ panic, said Sarah Hughes, author of “American Tabloid Media and the Satanic Panic.”

They cover a lot more and every topic is inverted to make Satanists the victims and to throw a tinfoil hat on every head who hasn’t figured out yet that means you’re not a walking zombie. Very clever games.