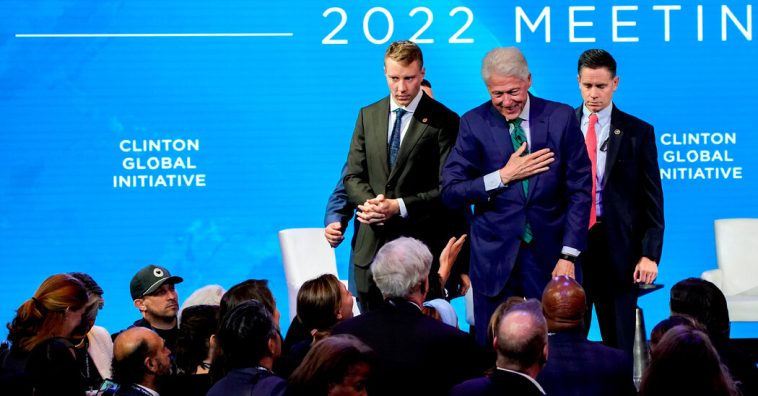 After a six-year hiatus, the Clinton Global Initiative returned to New York City this week, bringing together leaders from the worlds of nonprofit, government and business, with a few celebrities sprinkled in for good measure. It has been an eventful few years since they last gathered in 2016.

The article continuously refers to the group as CGI. I know we’re always told there is no link to these seemingly unrelated coincidences, but let’s look anyway:

Judging from the names at the event, many old friends and allies answered the call, including the philanthropists Laurene Powell Jobs and Melinda French Gates, Secretary Xavier Becerra of the Department of Health and Human Services, state governors, corporate chief executives, the chairman of the Securities and Exchange Commission and the director-general of the World Health Organization.

This year the initiative tallied 144 commitments, which will result in more than 1.6 million jobs and the reduction of 3.5 million tonnes of carbon dioxide emissions.

Commitments ranged from a program to build soccer fields in underserved communities to one making bricks out of volcanic ash. Nine members committed to providing humanitarian assistance to Ukraine. Mr. Clinton interviewed President Volodymyr Zelensky of Ukraine via videoconference on Tuesday, with Mr. Zelensky in his trademark form-fitting T-shirt. — does the lack of seriousness of these endeavors and the frivolous reporting ongoing with Zelensky tell us anything?

The first version of the Clinton Global Initiative, in 2005, was timed to the 60th anniversary of the United Nations. This restart is as world leaders gathered in New York for the first fully in-person United Nations General Assembly in three years.

Those numbers are begging for interpretation! @gem444

I know! I can’t really see that part much yet, just very superficially and basic.

Main things that interest me are 6 years of being out of the lime light. They haven’t been, they just chose to use that framing. 72,000 – 72 is a harmonic of nature. 400 offices – 72,000 / 400 = 180. Not a classic occult pairing, but I find it interesting that they divide evenly with the result being a number with the reduction of 9. And 11,000 in the US, just because they love tossing around the number 11, which for me represents “their” illumination.

Then again, it’s just an article and I’m overreacting.

I don’t think you are. The date posted of 9/20/2022, the mention of the number of projects as 144, I’m sure there’s more, but I just discovered that approach towards thinking a few months ago, so I definitely couldn’t say.

These three days also refer to the three days of lunar standstill around New Moon, the darkest night, which is Shane’s Thrice greatest.

This is why In ancient law it was three days before declaring someone officially dead, as these three day periods were always considered the “dark night.”

These are both completion numbers. This tells us that within linear time they are 1 step (likely within 72 months) before death, either of a persona or their physical body, but within the grander scheme of things, they have achieved bringing completion to the great work of the NW0’s phase 1.

Moving on to CGI as a name:

That should numerologically jump out at you as 369, in perfect balance) and 379 the connection of 6 and 7 being the 6th day, the day of humanity’s dominion and 7 the day of God’s perfect work. 6,7 being the rebellion of mankind becoming as God. This should ring bells in regards to Computer Generated Imaging.

The English simplified and the Isisraeli Gematria of CGI is 3-7-9 a reference to 6 becoming 7 as well. The total is 19, the number of years in the Lunar eccentricity cycle and 666+1 or 676; Lucifer as God. The letter Digamma the final letter of the Greek numerals used in the texts of Revelations is digamma, which is 6, but became written as an uppercase G by the priest class, and was then encoded into Latin as the 7th letter. 6 becoming 7, Lucifer becoming God. This will be covered in greater detail in chapter X. 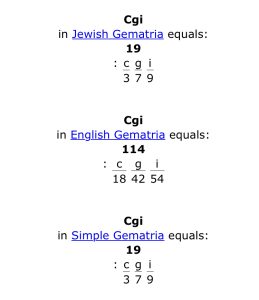 If there are a true and a false son of man for every ending age in this cycle, who was the false one during Yeshua’s time?
Did I understand you properly that elite families are still ‘auditioning’ their people for this role now?

There were many false antiXristos during and around Yeshua’s time:

The last being named “Son of God,” and hailing from the kingdom of CharaX, from which the name χάραγμα Chara-Agma name was taken, the kingdom of CharaX being well known for its coinage and importance in esoteric history. This will be covered later and involves the connection with the original serpent tongue.

This is an alchemically based coding, 5s abound.

72,000 references 72 the number of years it takes the procession of the equinoxes to turn 1 degree.

555 in Hebrew numerals is Chamash Chamash Chamash, the equivalent of both Babylonian Sun God Shamesh, and the “black land,” of Egypt (Shamesh is the black horseman of the apocalypse as well) and Solar AlCHEMy, which is a reference of transmuting by MAGIk. Repeating it makes it “thrice great,” a reference to Hermes Trismegistus the ancient patron of alchemy. The black land (KEM/CHEM et) was the fertile silt brought by the flooding of the Nile, which transformed Barron dessert into fertile ground.

They are also numerologically 9,7,8, or 7,8,9 which are the final three digits in order and show a “final third.”

This is in reference to the part of their career in which the Clinton’s have entered, the sun SET. Set was the ruler of the “red land,” of Egypt, the Dessert, referring to Jupiter. It is also further confirmation of coming Shamesh, who as the third horseman is black and represents Sun Set to Midnight. There will be a death fairly soon (probably not tomorrow.)

Then we begin the 4s referencing the impending death or sacrifice:

144+35 is 179, one degree short of 180, suggesting that the death will occur shortly, in some order of 72 months, which is exactly 6 years. This comes full circle to the original mention of a “6 year absence.”

One further note is that 72 months * 30 days/month = 2160 days. 2160/360= 6. That is 6 full circles, 666, which in pebble math is 1 number that cannot form a regular polygon. It is 1 shape short of forming the great hexagram, which requires seven stones to make the center piece. This again signals the “missing final piece.”

There is plenty of “you fell one short,” and “there is one piece yet to be placed,” messages throughout this article.

It is also the exact number of years in the Jupiter and Saturn synchronisation great cycle to which temple and civilisation constructions are timed, as discussed in 13 Monkeys Chapter IX.

252 years is another scalar step of “month,” important to the prophecy of Revelations: 3.5 months. 72 years is 1 degree of procession of the equinoxes. At the scalar level where 1 degree is 1 month, then 72 solar years * 3.5 months of the first beasts reign = 252 solar years.

From 1776 (a chiral mirror of 667 found throughout this article, and is 888*2 a reduplication of the cycle of time) the founding of the USA and the Bavarian Illuminati (both on the same day July 4th at midnight) 252 solar years is 2028. This gives another firm date for the advancement of the NW0 plans towards the great work.

Libra is also the claws of Scorpio the 6th zodiac, the ζοε (living beast), represented in Revelations 4, (the 4 living beasts times three is 444) who surround the Αρνιού (The Arnion, the little Aryeh Yehudah) the little lamb who is seemingly mortally wounded. Scorpio is always represented as the Eagle, the Fanax, the Wenu bird (see Wennefer) after rebirth.

Scorpio is now in the Winter Solstice, entering the period of “The Sun’s Return,” in 2025. This is, after death of the sun on December 21, the black sun of Shamesh/Saturn, the rebirth three days later on Saturnalia, December 25, the meeting point of Osiris and Shamesh on Xmas, X always representing Osiris, Black and Green, death and rebirth.

This meeting point on December 22,23,24 is 12/22 (7), 12/23 (8) 12/24 (9) ending in 12/25 (10) where Ra and Osiris, Shamesh and Osiris, meet at the 6th hour of the night l, mid night, the darkest point, and together Shamesh’s death inseminates Osiris fertile green corpse (male becomes female in death…) and birth Horus, the Risen Sun, also known as Orion the warrior hunter of the spring. This should set off bells in connection with Artemis/Diana.

This is why the 789 are featured in this article, representing that the death of the Clinton’s on the scales of Shamesh, also known as the scales of Ma’at the cosmic order, will birth Horus, the risen sun, the antiXristos.

Firstly I’m not a royalist but it tickles me that some folk in the US have been quite outspoken about the Queen when the US has its own Saxa-coburgs in the Clintons, the Bushes, the Rockefellers etc…