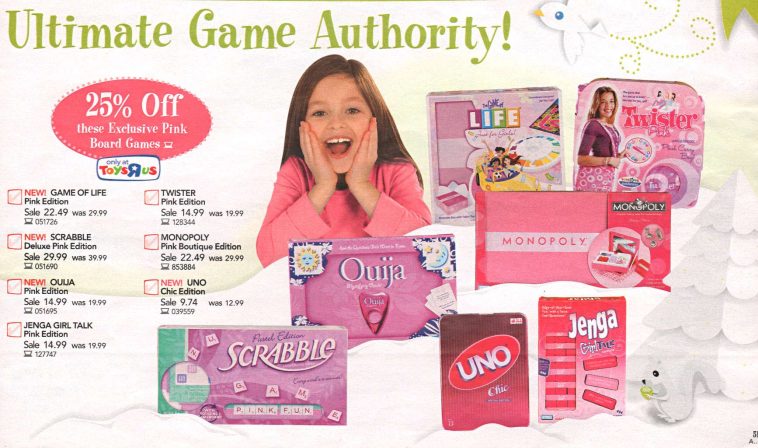 Back in 2008 HASBRO took their famed Ouija Board, made it pink and targeted young girls. It has since been discontinued, thankfully.

Here are some adverts from when it was still on store shelves: 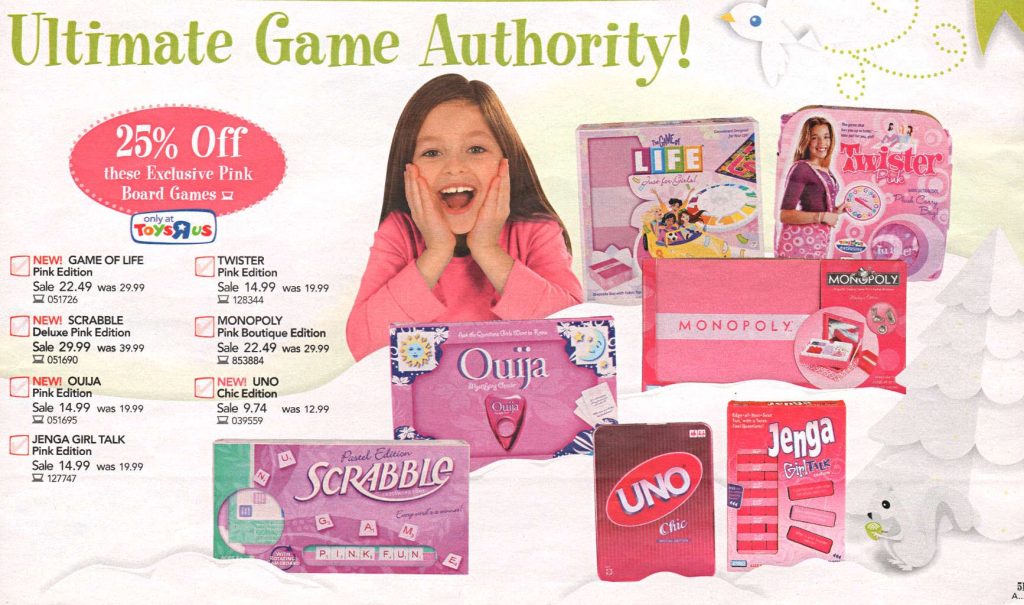 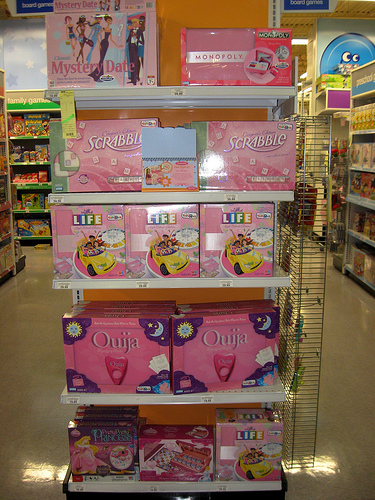 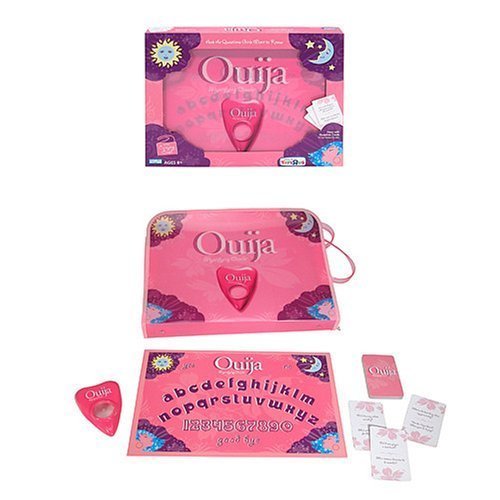 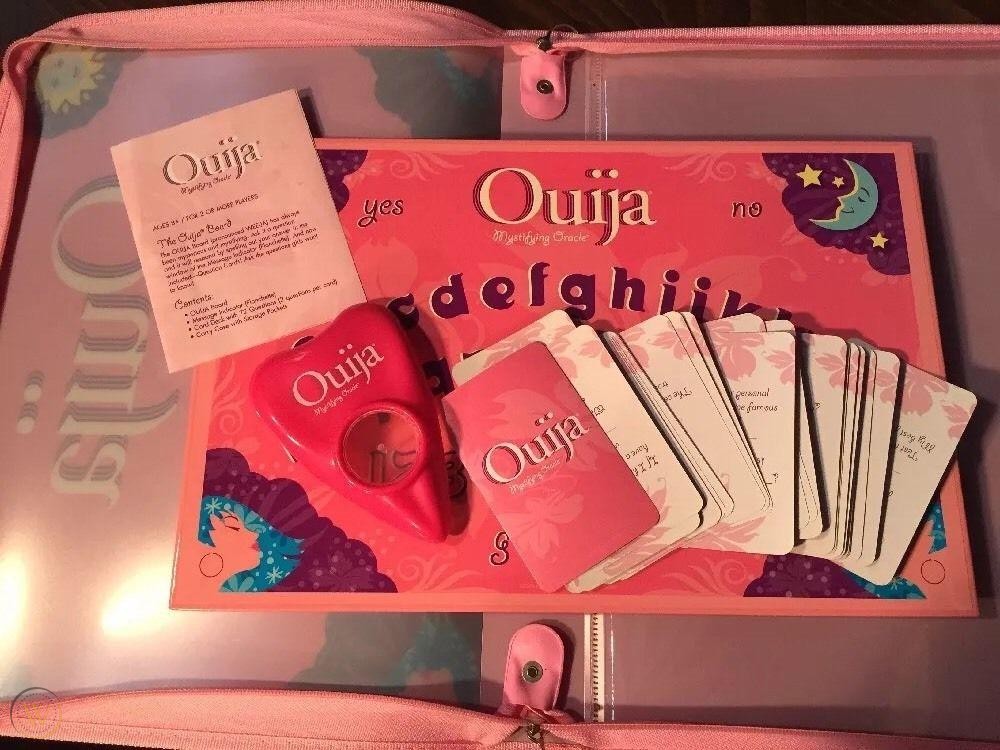 A lot of badness came into my life after using this as a troubled, bullied 6th grader. Many suicide attempts and mental episodes that set me back in my adolescence and young adulthood. It took a long time to get right. Not sure how I did it, but I find the occult repulsive now and feel badly for all of these people who are so easily taken by it.

My story is pretty much similar to yours… These things (ouija board, witchcraft rituals etc.) are not meant to be f*cked with. As you said: it took a long time to get right.

It’s very serious stuff! Glad you were able to break free from it too.

I had some of my extended family members die from playing around with these things in the 40s and 50s.

Yeah, I had a friend into that at one time, too and something came into my bedroom, as a very young adult, because she had been playing it in my apartment.

It hated me, told me to “go to hell, b***h” (spelled out on the gameboard) repeatedly and wouldn’t speak if I asked anything or touched the game at all. She could make the planchette move on her own.

She had gone upstairs afterwards with a neighbor and I had gone to sleep. I woke and it was right next to my bed, staring into the side of my head as I slept. I mean RIGHT next to my face, kneeling down to eye-level.

I asked it who it was when it was staring at me creepily like that and it made up some stupid story. It was freaky at the time.

I laughed at it again later when she was on the board again (yes, candleflames leap and all that) and that was that – it kept cursing at me and she kept telling me to hush, she moved out and I guess it moved on. Or maybe just went dormant, sometimes they do then come back later as something else when you’re more vulnerable.

But one guy in highschool had to burn his to make it stop and from what I’d heard he was suicidal over it.

Yeah!! Same thing happened with my grandma. The board wouldn’t work until they told her to leave the house. She said she looked in the window and saw the table literally floating off the floor. She asked them later about it all they said they asked the devil to prove it existed. The piano started playing by itself. The table lifted and chairs and things for around hitting the walls. It freaked them all out. They had all kinds of prayers to remove it but it killed them one by one. When they threw it in the fire it was shrieking at them.

That’s truly horrible. I’m sorry, I know how you feel about that side of your family. I hope that my; old friend got out okay.

Yeah hopefully he is okay… I am glad you got out okay it sounds like he hated you like it hated my grandma. I’m glad you are fine though. I don’t know how you had the guts to laugh at something like that. I guess you had a lot of encounters by then. When this stuff was new to me if I even walked into a room and my arm hair stood up I would turn around and walk out though I would offer a remark or two. Maybe your friend isn’t in as bad as shape as the boys for one reason…These guys actually asked specifically for the devil to come and prove he existed. Your friend probably didn’t go that far unless he was completely crazy or idiotic (no offense to the dead but it was a dumb thing to do) These guys all died unnaturally freaky deaths within a week or two. I think it was 3 or 4 guys. I remember the last one was crying, he slept in his parents room even though he was like 17. He wouldn’t go to the bathroom at night by himself. He was saying to his dad to please pray over him “it will get me, it’s going to kill me” and later when he was driving he got a flat tire. He got out to fix it and the truck rolled over the top of him and it was on flat ground, it didn’t make sense technically, except everyone knew why because they saw the others die and it was a very small town. That board stuff isn’t good to play with but people ignore warnings because it didn’t kill or bother this person or that person. It’s always just some strangers experience until it’s breathing down your neck haunting you. The boys had been prayed over, blessed and everything but they still got killed.

A E
Reply to  Marie

I mean, I didn’t go into it laughing, she had asked it several questions and the answers tickled me for some reason and I made some silly joke, because the answers seemed silly and that’s just a thing I do, and it pissed the board off. It warned me and for some reason that made me laugh. Maybe I was just startled, but that was it, the thing started cursing at me. At that point all I could picture was some outraged spinsterly auntie flinging spittle for some reason and it seemed all the more ridiculous. I’d literally have just opened my mouth to speak and it’d shoot to “GOODBYE” (speak to the hand!) I didn’t touch it much at all, mostly because it really wouldn’t respond to me much from the beginning. Maybe that’s why I mocked it, come to think about it, I was offended, can you believe that? I suppose I should have been glad but I was mildly disappointed at the time.
I remember the thing by my bed like I can still picture it clearly, it wasnt grotesque at all, it was just the image of a medium-toned older black man wearing one of those hats like the street urchins used to in the 20’s films. It wasn’t like a lot of other visions I’ve had, he was more solid and I could make out colors, not just light. He didn’t appear particularly angry, just curious maybe? He turned his head to look at me in the eyes and the way he moved was weird, like slo mo and not a perfectly smooth motion, hard to explain.
The next day I told my friend, so she asked the board who it was. It said he was a slave who used to live in that spot. I can’t recall the name it gave, it was just a first name. I think it started with a z, like Zeb, but that’s not it.

Maybe it was Zeke.

I’m sorry to hear that. These things are are no joke for sure.

Well unfortunately I never met them since they died but my grandma made sure I wouldn’t go to those parties or try one out.

I wonder how the boards are made. Like if they pray a gateway open for demons over a stack some of them.

A E
Reply to  Marie

I learned about all the stuff like this from other kids at church – they were the only kids I was allowed to play with and when we weren’t attending I just played alone. Bloody Mary, light as a feather, stiff as a board, etc. I tried them all, too. This is what can happen when your parents’ fondest wish is to forget you exist so have no idea what you’re getting into. I don’t think they’d have thought to caution me anyway, they’d think it was just some silly game. It’s very good your grandmother was wiser than that.

Sadly, being a reseller I know these pink ones are super hot items right now, but I won’t touch them. Ouija and Tarot are obvious, but many many items carry spirits with them. Most that I have found came from Asia.

What other games have you seen problems with? Were they firsthand experiences, customer complaints, a mix?
I think it’s funny that scrabble and monopoly are still two of the most pricey games out there. I used to love scrabble.

Is Scabble evil too?
I can make a more evil Ouija board with intention than compared to a no love corporation making these things in a automated assembly line!

No, I don’t think so, it seems to be building linguistic skills, which has been mostly shunned as ‘boring’ and ‘uncreative’ but actually help us to understand history and each other today. Monopoly teaches financial strategies, which aren’t really considered to be tools for the plebians either.
So, they make these more strategic, even partially intellectual games not only sound boring but make them more expensive, while things like Hungry Hungry Hippos and Chutes (Snakes) and Ladders and Candyland that are mindless remain very affordable and get all the ‘magical’ advertisement.

I bet they have some sweet aside for Luciferian demon injection.

Oh no, what’s wrong with Scrabble?

None per se, but I just get a weird feeling about some things. Not a very strong feeling either, it’s easily dismissed. It kind of runs on one side of the family. Like my aunt has it strong. So much so that she finds it very hard to go out in public anymore. One of my first memories is of her burning her hand on a jade dragon next to our TV. I went over and felt it right after and it was ice cold.

Card, dominoes and dice luck runs in the family too. Certain people aren’t allowed to play with each other because their luck usually combines into the perfect storm. I mean, like getting all the spades or winning a game of canasta in one hand. lol

You should talk with Marie. I’d bet you could share some stories.

I have the luck thing. It’s really good or really bad and nothing in-between. Do you guys have the o neg blood? I’m trying to find out where this intuition thing comes from