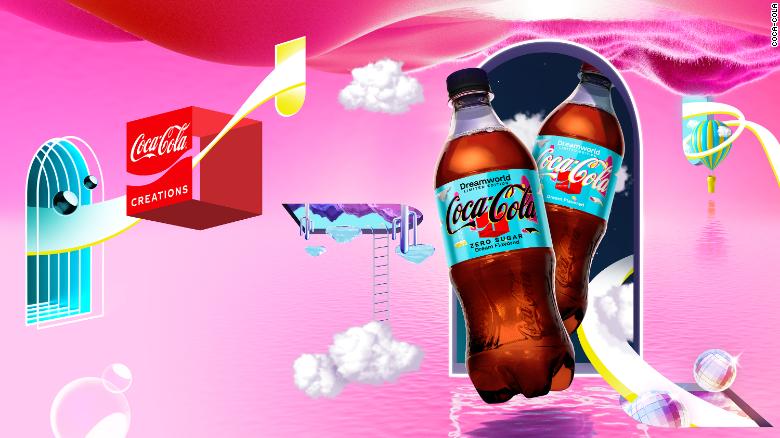 Some Masonic and mind control references I see in the picture:

Masonic ladder mainly depicted in all freemasonry especially heavily used in York Rite Masonry is seen extending from a cloud leading into an inverted Masonic arch portal as the shape is in the typical Masonic arch pattern. The two bottles (which in this context I would suspect can also be representation masonic pillars Boaz and Jachin) are also seen going into an arched doorway leading to another dimension or in this case ‘dreamworld’ complete with a partial Saturn (Satan) ring formation extending to ‘disco balls’ (planets) which is a representation of broken mirror programming used during the mass hypnotic dance/drug experiments in the 70’s and can also be a representation of The Alpha and Omega Masonic Order as the company that supplied disco balls during the 70’s was Omega National Products. The hot air balloon coming out of one of the inverted portals resembles one of those ‘mason’ jar balloon contraptions and it also resembles Saturn as the light wraps around the balloon making it appear as such. Also we see bubbles which are an indication of trauma based mind control as our brains handles truama by creating a “bubble” around a traumatic experience and many times monarch slaves will, especially the older generational slaves will be represented by bubbles especially in the entertainment industry. So when this mental bubble or ‘alter’  protects the psyche it can actually cause a split to occure which then can be accessed by trigger words or symbols by a handler if the split is done on purpose. There is also a mirrored archway in the far left of the picture and is another connotation for mind control. Probably some more symbolic references in the pic especially with the color pink(Venus) and yellow and the floating aspect and the fractured light emitting from the doorways stemming from the mirrored archway. Also the Coca Cola ‘creations’ box is another symbolic mind control aspect as well, especially with the light going through it and into another dream portal.

The red box could be the Saturn cube. Also, I had thoughts about their Starlight flavor. The fallen angels were supposedly stars. Soda is made with phosphoric acid, and one of Lucifer’s names is Phophorus, the Morning Star.

Good observation! Now makes sense with the pink color as well. Pink not only represents Venus but also the Morning Star (Lucifer). Even the popular pink plant Tiarella is known to the masses by the ‘Morning Star’ plant because of it’s bright pink appearance.

They love alchemy. Was Jesus gold silver or mercury?

Could you at least make an effort to educate us on the Masonic symbols in this picture?

Done! I sometimes forget that people are new to the topics on this site and are here to learn. Cheers!