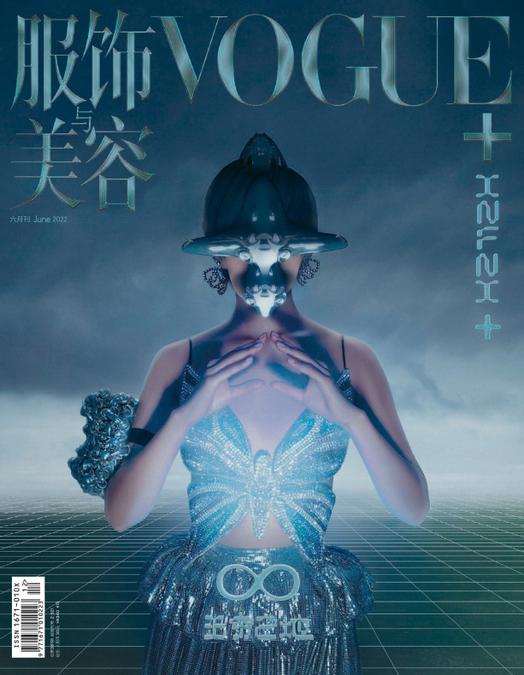 Few things I noticed was she has on a weird fire hat/helmet with little horns it looks like?  Then glowing eyes which goes down to some sort of mouth cover/filter/muzzle or animal/dragon mouth type of attachment. Shattered glass/diamond butterfly shirt is illuminated and is the obvious main focal point of the cover and is clear indication, given the rest of the cover, of shattered glass programming which is used on monarch slaves that VOGUE loves to frequently display on their covers. I also noticed the infinity symbol (sometimes it’s also used as a dualistic representation of the Ouroboros symbol depending on context) The symbol also has many different meanings in occult and various religions. Also her hands are shaped like the flashed hands symbology found in Mason and Luciferian societies. The background is dualistic as the ground is like a computer data grid while clouds/smoke are above.

Creepy cover. It feels like they are trying to normalize transhumanism. Her hand placement looks a pyramid.

The analemma (generative) (infinity) is in her lower belly, the butterfly body (metorphosis) is part of the new branches. Everything borne of this will be lower chakras.
Her face is AI insectile. Her hat is a condom tip, the face is spiderish. Her hands swear allegiance,l to be a mouthpiece, while being suggestive towards both sex acts and eating.

Author
deletetheelite
Reply to  A E

jake
Reply to  A E

The analemma (generative) (infinity) combined with the above butterfly center gives a phallic symbol, a satanic symbol, also found in baphomet’s belly…
this portrait is about transhumanism, satanism, NWO, and rebellious obedience..

oh, yeah, also the butterfly is a symbol of monarch program, mk ultra..programmed !

I stared at this way too long. I’m logging off now, this is truly disturbing.