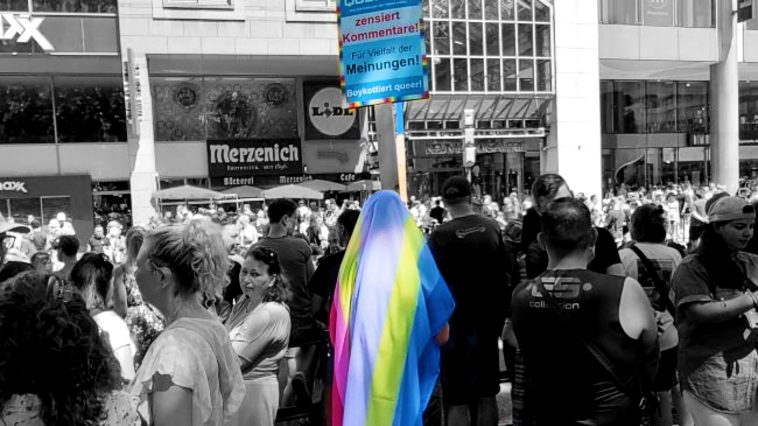 Reduxx has learned that members of a German pro-pedophilia group were present and demonstrating during one of Europe’s largest Pride celebrations in Cologne. According to a post on the website K13online, members of the pedophile community called Krumme-13 congregated at the parade, colloquially known as Christopher Street Day (CSD), on July 2, and displayed a […]

“The infamous ‘Kentler Experiment’ conducted by Berlin-based sexologist Helmut Kentler saw foster children placed in the homes of pedophiles beginning in 1969 for the purpose of facilitating child sexual abuse. This experiment was authorized and subsidized by the Berlin Senate. In 1988, nearly two decades later, Kentler described the project as a “complete success” in a report he submitted to the Senate.”

As a child who suffered from sexual abuse, I can tell you as now, very much an adult, the devastating effects that had on my psyche which lead to years of multiple health problems. Sexual abuse on children is EVIL and horrendous and absolutely SELFISH of the ones perpetrating it. Those advocating it should be thrown in a lake with stones bound to their necks!

That is sad to hear. Noone should ever suffer anything like this. I hope you have found your peace with it.

What happens when we realize that we’ve slipped fully down the slippery slope and have faceplanted at the bottom?

“Schwarzer has explained that feminists were slandered for “exposing the whole mess [attempts to normalize pedophilia]”. She also pointed out how women were accused of homophobia for calling attention to attempts to legalize child sexual abuse.” I’d call that the original template for the modern slandering of women as transphobic for questioning any part of the radical trans activist movement.

And so it goes on. My greatest fear is to live in an society where pedo’s can openly display this extreem perversion.

This is getting normalised way to fast. Some people say “we need to be able to talk about anything in a democractic society” Well i say it is BS. Talking about things is the first step to normalising. Some things like this crap should not be talked about. It is a small flame that should not be ingited by our breath. it should be extinguished asap.

I am a peacefull guy, i like to let people live and do not interfere much with other’s.
But i think if i see some pedo preaching about this crap i would not restrain myself and would counter him loudly, verbally that is.

I think it should be talked about — but only by the victims willing to share their stories, to help others in similar situations. It never ceases to amaze me that there are people out there who are pedophile apologists. I don’t care if they call it a sexual preference or a mental illness (even though it’s clearly closer to the latter), these creatures do not deserve our sympathy.
The world would be a far better place overnight if all the pedos spontaneously combusted at once.

This just blows my mind. How depraved. Although I’m not suprised it took place in Germany…..

I remember hearing about this sex experiment with the children after researching that the same year in 1969 they legalized b********y and have animal brothels. They said the migrants have made the animal sex problem even worst now. Either way now we know the origins of placing foster kids with registered sex offenders on purpose because now everybody does it.

your one hell of a sick person.
you must be french.

I’m not French. I’m American. I am not sick enough in the head to think raping animals is a turn on. I looked it up because I heard about the exotic zoos being legal in a weird top 10 video on YouTube before and wanted more information on their laws.

“A complete success” DUDE WHAT AM I READING