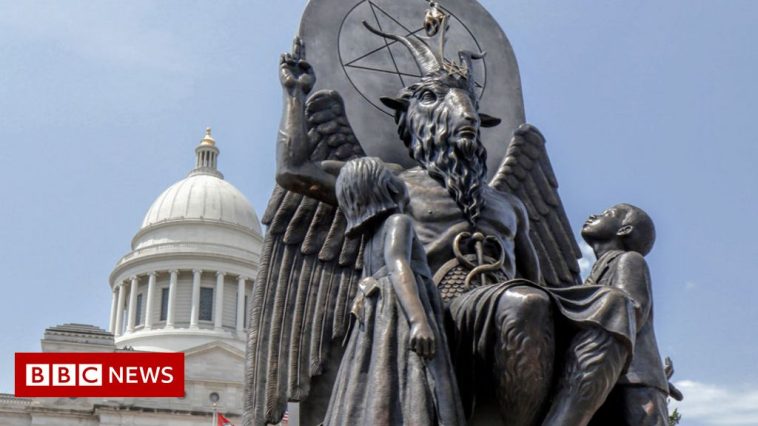 The documentary shining a new light on the Satanic Temple and its battle for human rights.

The language about reason sounds like the Georgia Guidestones. And this organization sounds like it is structured just like Freemasonry, one version for the unitiated dummies on the lower rungs and outside apologists and another version for the insider higher ups who are clued in. Satanists lie to cover their real aims and activities.

They may or may not but that is why we are here to make sure that they do exist for all life!

Penny Lane – read the Beatles lyrics and consider world events – not specific events but societal changes (the nurse selling poppies who feels she’s in a play, but does it anyway).

Lucian Greaves essentially means the fat remnants, tallow or crackling of Lucifer. Offerings to YHWH demanded that the fat be reserved to God Exodus 29:10-13. This was the first consecration by Moses to establish the temple. It describes the fat to be used as that surrounding the internal organs – the pure, valuable fat which, when rendered produces both tallow and cracklings.

Several people on this forum have recently confessed that the ruling classes’ insistent belief in and saturation of us with Satan is what convinced them God must be real, too.

So they do what they always do against Christianity, but at the same time, use Humanism to deceive while holding rites and rituals they claim are performance art (which is seductive, even to Christians who’ve been conditioned to love Halloween and horror movies). It shames one side while offering safe brotherhood to the other so herds them in, even as it entices athiests and agnostics to participate in the “joke” and the fun of the Christian offense.

It also paints the Satanists as good, caring stewards while fearing attack from the ones who are the “real” historical wolves, according to their twisting.

Fleurdamour
Reply to  A E

There sure are a lot of paths to hell, aren’t there? The straight track, for those who understand and choose that, and the more meandering ones, through jokes and intellectual exercises.

Sure seems like it. Maybe that’s why they call it the slippery slope? Doesn’t matter how wide apart you start sliding from, it’s all downhill from eitherwhere.