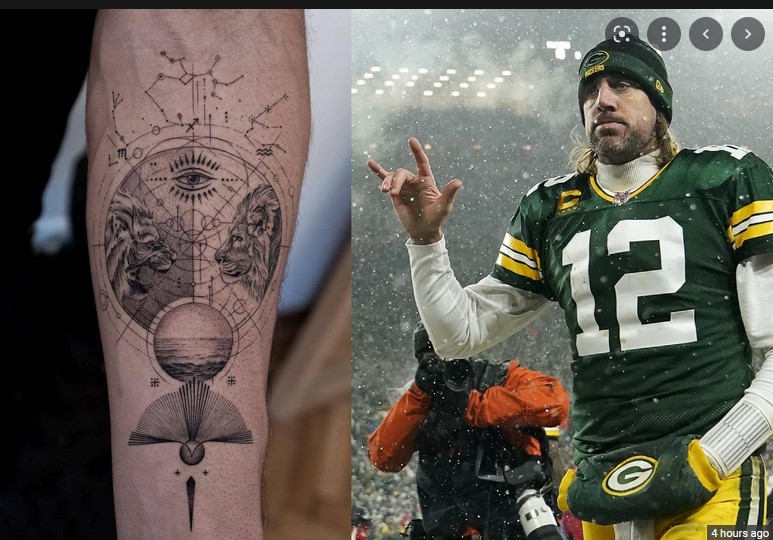 His tattoo is a demonstration of high initiation into The Mysteries of The Dragons.

At its simplest, he is representing the four zodiacal signs (“the four living animals” of revelations) on the current cosmic wheel, which are the lines that cross the circle into four quadrants.

It refers to procession of the equinoxes; that is the Earth wobbles on its axis very very slowly like a spun top, making 1 full revolution every 25,920 years = 60*6*6*(6+6), rotating one zodiacal sign, approximately 30 degrees, every 2160 years = 60*6*6 years, or approximately moving 1 degree every 72 years = 6*(6+6). This is what biblical texts termed the “Mark of The Beast and the number of his name,” 666 being the most important number of the Luciferian Astrotheological Solar Worshippers’ religious system, relating to procession of the equinoxes.

The cross in the circle on his arm shows which zodiac signs are currently present at the equinoxes and solstices, which slowly rotate counterclockwise.

The sign of the spring equinox is the “sign of the age” in Luciferian Astrotheology. His tattoo references that currently we are entering into Aquarius at the spring equinox (you can see it is displaced off the line by about one degree), which thus also places Scorpio on the winter solstice line (90 degrees left) and his personal ruling sign Saggitarius in the middle of the two being a personal ID on the insignia.

He then references Taurus, which is now entering the summer solstice, with the hand signal of the horns. The enormous reference to Leo the Lion, which is now on the fall equinox is clear: on the left, during the black shaded half (the dark period), it is young and vengeful, and on the right white shaded portion (black and white dualism of free masonry) it is old and peaceful.

This tattoo references the ancient history of the Younger Dryas Cat-Astro-Phi mythologised in the biblical story of Noah, which occurred 12800-9700 years ago during the Time period called “the age of Leo,” when Leo was in the spring equinox.

This Cat-Astro-Phi of the Younger Dryas led to glaciers melting and then the sea level to rise some 4-600 feet, Thus destroying all coastal civilisations at that time, mythologised as Atlantis, the Dragons first Luciferian civilisation. This is the reference to the waters at the bottom of the tattoo and the sun symbol of Atlantis, which you can see I’m on old Egyptian scarab eagle sun hieroglyphs.

It also references The Dragon’s prophecy that they would return to their former glory they had obtained before the destruction of their civilisation once Leo reached the fall equinox, and Aquarius arrived at the spring equinox, which is N0W, during the rise of the NW0.

It is a prophecy of inversion and the coming N3w W0rld 0rder with Astro theology of The Dragons, the mark of The Beast.

I will explain further in the next Monkeys

Thank you for your always amazing and educating posts.
could you explain more about numerology and the numbers symbolism. I am looking for references about the subject but i could not find what i am looking for.
i would love to have a recommendation about references on the subject.
For example the number 13:C we have 13 points in the world map in the old Facebook login, your articles are also named 13 Monkeys. What symbolism does the number 13 have?
Is the number 555 the opposite of 666? the same way 666 is the mark of the beast, 555 is the mark of angels?
Your nick name is 444gem, what is special about the number 444, and is
gem = gemstone?

Covering the depths of numerological encodings here would be very difficult. The number 13 is, at its simplest 12+1, that is the end of one full 360 degree turn around the circle plus 30 degrees, 390. Hence, 39 being the ultimate master number, reducing back to, 12, a full circle.

The number 444 is at its simplest 1/2 888, the number of Iousus, whom Yeshua became after he defeated the 4th LuciferIan deity in death, Osiris, literally “I Am” as now encoded in the Latin langauges like Spanish “Yosoy” and French “JeSuis.” I mentioned the 4 aspects of LuciferIan Solar worship in Monkeys 8, and I will explain in more detail in later chapters, but know that a Yeshua himself got the Luciferians to use their own MAGIK encoding against him from each of the 4 solar deities and thus undid all of their power and sealed their fate at the end of the age: the use of control of justice against him (Saturn/Shamesh), military authority and the spear (Jupiter), The crown of thorns and the hot burning Sun of Mid Day (Apollo), and Death itself (Osiris.) He also performed his blood sacrifice, dying exactly on this spring equinox, the most important solar festival, and this became Gods Sun.

In the next chapter I will include a very important book on numerology in the fractal, which is now quite old.

Combined this symbology represents that he has reached the 31st degree of Fr33ma$onry and demonstrated an understanding of eclipse cycles and procession of the equinoxes, and their relation to world history and the cosmic fractal.

Most people: “That’s just a tattoo of his astrological symbols”
444Gem: “Hold my beer”

Excellent information, I find myself going back and reading your articles for research almost on a daily basis, it’s priceless.

Thank you deletetheel-ites, I’m very glad my articles can help guide you on your path to discovering The Truth.

You can just say its satanic

130 years to go for age AQ.
They want to rush it, this is not it.
Pisces being the last sign and God box I doubt humanity makes it to Age of AQ.

I speak here for safety’s sake; I am not nor ever have been associated with any occult organisations, as taking oaths is strictly forbidden by scripture, but I am well versed in their “mysteries” which are all Luciferian, incomplete corruptions and derivations of our sacred texts, dating back many millennia before the Younger Dryas, that were passed on by us as “Ummanu” (where the word Human/Humano comes from, a Mesoptamian reference to us passing on the tools of civilisation to “Humanity” after the flood, “Um-ma-nu” literally meaning “One who builds,” and is the origin of the name Fr33 ma$0n which comes through Ancient Greek and Chaldean, and also comes from the original term for the mythologized Luciferian Noah, who was called Minu, or Sun Seed Man, and is the root for “Minotaur” but I digress as this is better explained with context and graphics) around the world, and which are part of my and all Aryeh Yehudah’s lifelong studies.

I am willing to answer any questions you might have here in the comments section.

Alternatively, I usually try to respond to all of the questions and comments on the 13 Monkeys series.

It appears that Roger’s occultic girlfriends have led him astray. I remember reading a couple years ago, that Aaron Rogers “deconstructed” his faith and no longer considered himself a Christian. This seems to have been the chic thing for people to say during that time period, as I read many articles about others, “deconstructing” their Christian faith. It was a trend in the news at that time, to talk about people who had been Christians their whole life, having questions they supposedly couldn’t find answers to, and leaving the faith. They believe they are now enlightened. These people are deceived. They have left the absolute Truth of God and replaced it with the false religion of relativism. Questions and doubts are normal in the Christian walk. They should not drive us away from God, but as we read His word and pray, they should draw us closer to Him. I’ve learned that God is big enough and loving enough to handle and answer any questions and doubts that I have. Most of the questions people have about God and Christianity, can be answered through good apologetics. Hopefully Rogers will come out of this deception and come back to Jesus.

Both his prior and current girlfriends have, at various times, claimed to participate in witchcraft.

If you look at his Birth Chart he’s a Sagittarius Sun, Scoripo Moon and has Black Moon Lilith in Aquarius. That explains the astrological symbols at least. The rest I have no idea.

It could be: He refused to be a freemason, because he has a soul.
So then they cloned him.
Clones do not have souls.
They transferred his memories into the clone.
Any soulless body can be controlled/owned possessed by a demonic entity.
Maybe the demon that was in Putin, took over Aaron Rodgers, because he really had a need to show off shirtless riding a white horse.
He left Putin’s body and he can now be the be the super athlete, football quarterback he has always longed to be. Putin would get a Tattoo just like that.
If he has superpowers now and never ages like Brady, it could be the case.
I know Putin was possessed by a very top demonic fallen angel and was looking for a younger, new and different body.
I wondered who it would be.
It could be Rogers, at least he will test it out.
If he gets ultra rich, lives in a palace, yachts and planes, and has a multitude of women, it may well be Lucifer himself has found a new home. I wonder what they did to the original Rogers, I know it is not anything we would want to know.
This kind of thing happens all the time.
It is what they do, if you sign in blood to sell your soul, for “power”entering into the 33rd degree of masonry, they take your body and a fallen angel demon will possess you, you are gone, although it is a trick and the person never realizes that is what will happen.
And also if you refuse, they just clone you, and you also lose.
But as long as you still have a soul, you really win.
Freemasonry is more evil than any stupid person who wants to join it knows.
You can’t trust the devil.