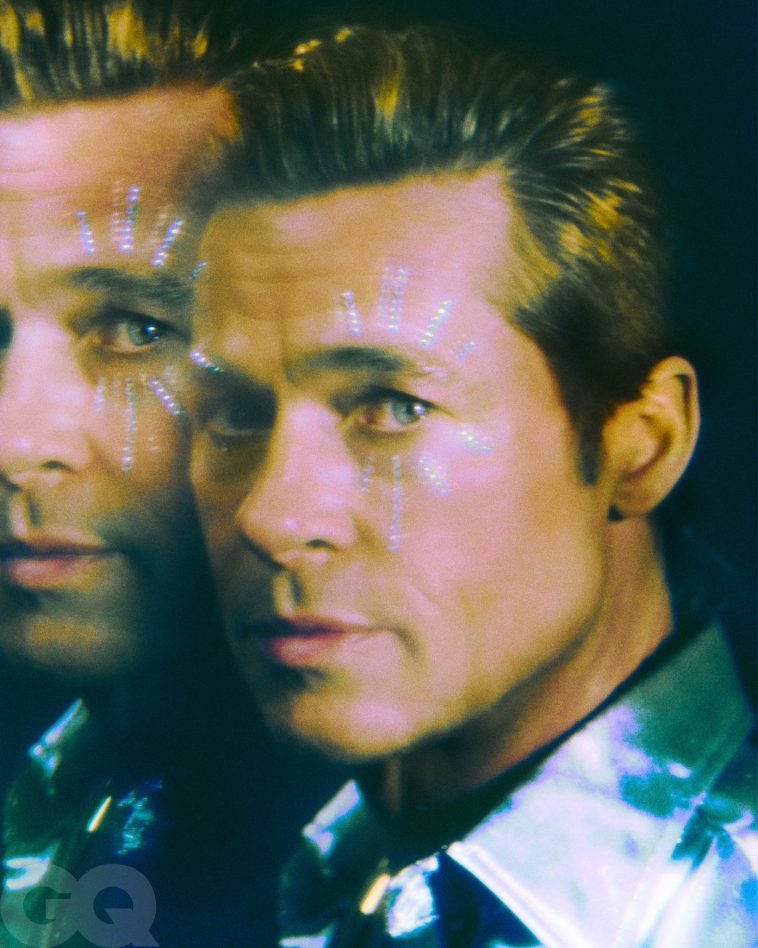 Here is an excerpt from the article from GQ:

Brad Pitt tries to remember his dreams. He keeps pen and paper on his bedside table and records everything he can recall when he wakes up in the morning. “I’ve found that to be really helpful,” he says. “I’m curious what’s going on in there when I’m not at the helm.” He tells me this one recent afternoon in the brightness of his living room, at his Craftsman home in the Hollywood Hills. For a long while, his sleep had been haunted by a particularly persistent and violent dream—the particulars of which he later describes for me in an email exchange. He writes: 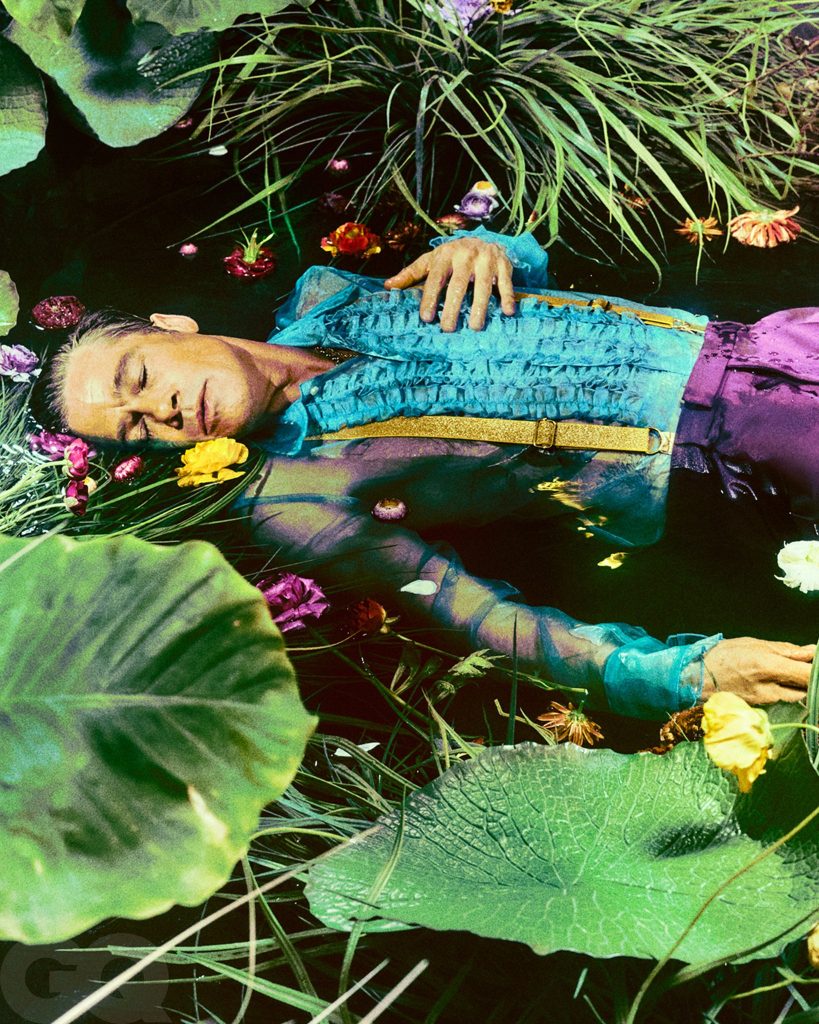 “For a solid four or five years there, the most predominant dream I would experience would be getting jumped and stabbed. It would always be at night, in the dark, and I would be walking down a sidewalk in a park or along a boardwalk and as I’d pass under an Exorcist-like street lamp, someone would jump out of the abyss and stab me in the ribs. Or I’d notice I was being followed and then another flanked me and I realized I was trapped, and they meant me grave harm. Or being chased through a house with a kid I’d help escape but got pinned in on the deck—and stabbed. Always stabbed. And I would awake in a terror. I didn’t understand why it/they would want to hurt me. This stopped a year or two ago only when I started going straight back into the dream and asking simply why?” 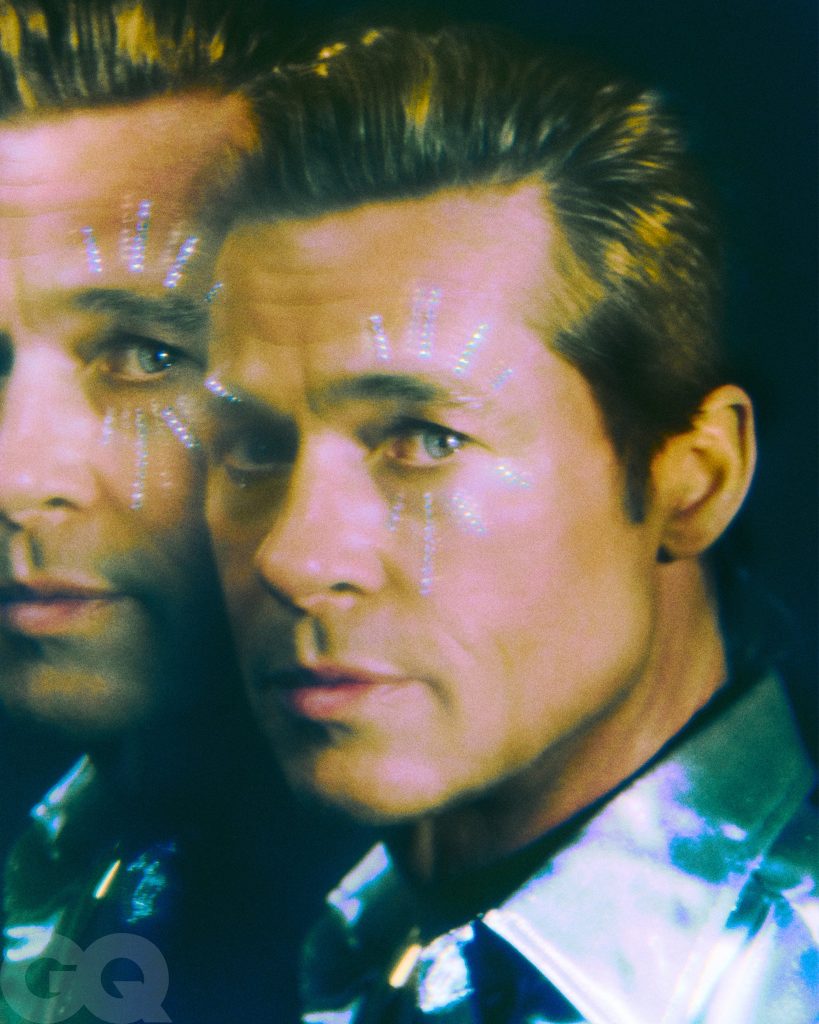 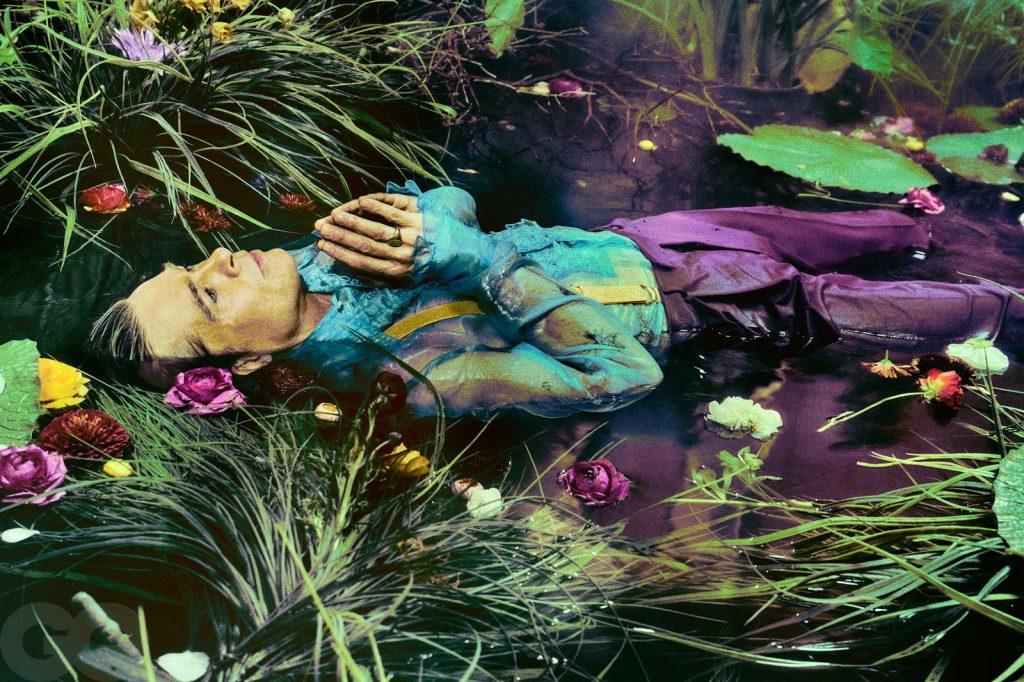 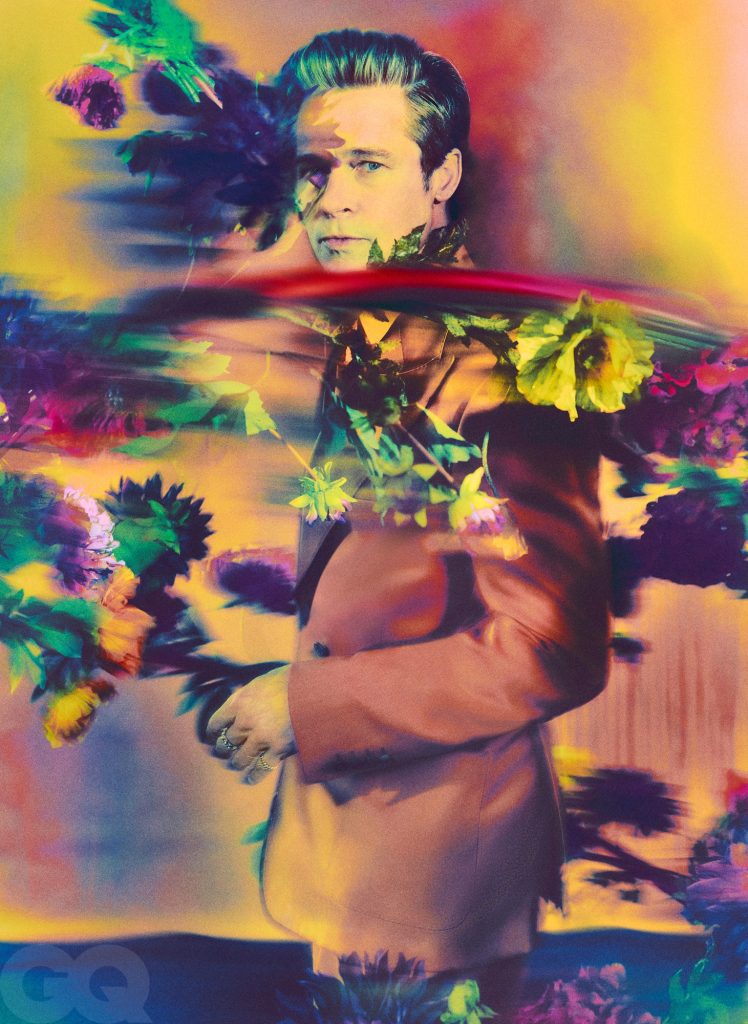 “Mining his dreams for what meaning they might contain, he says, is a part of that process. As is plumbing his own past for the wisdom that comes from his challenges. “Out here in California,” he says, “there’s a lot of talk about ‘being your authentic self.’ It would plague me, what does ‘authentic’ mean? [For me] it was getting to a place of acknowledging those deep scars that we carry.” 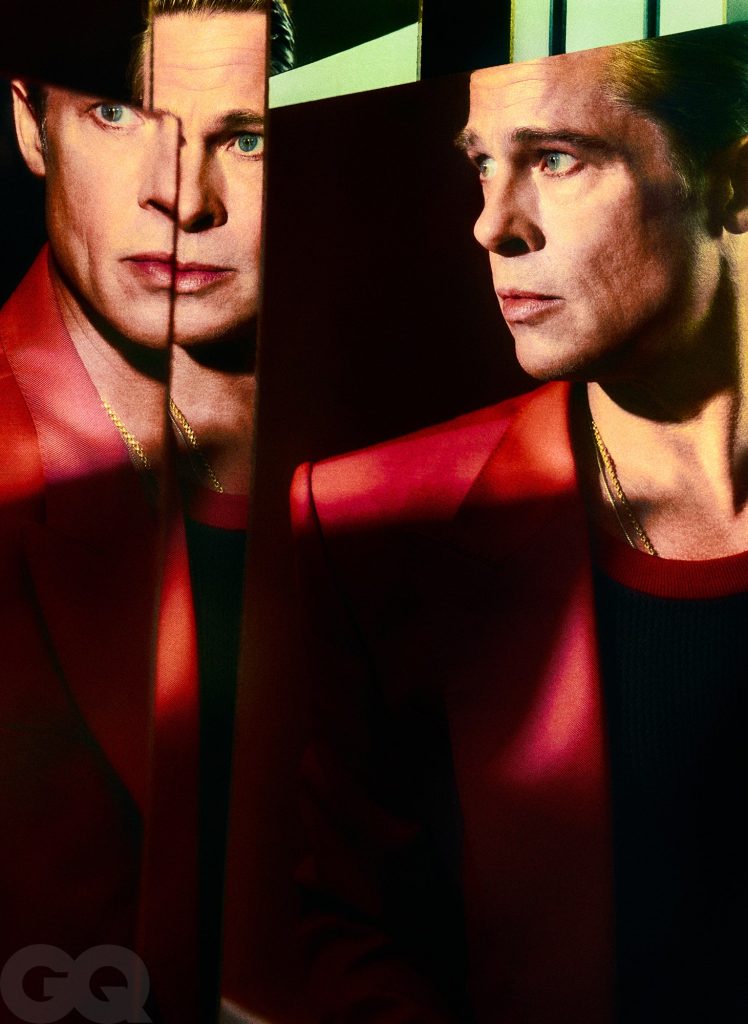 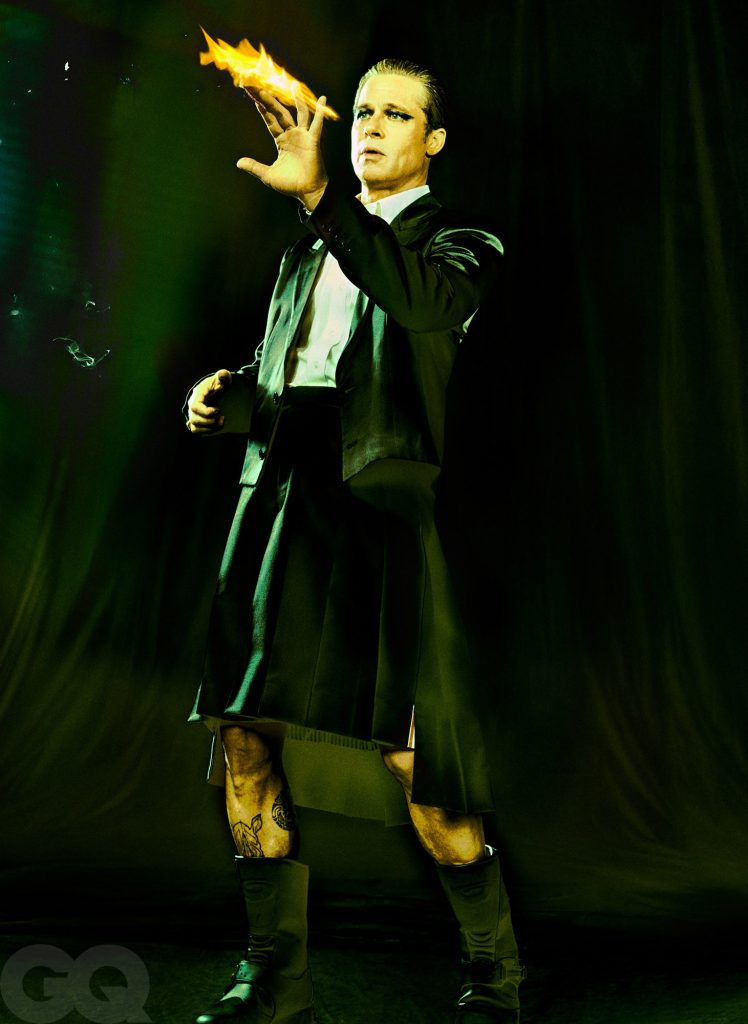 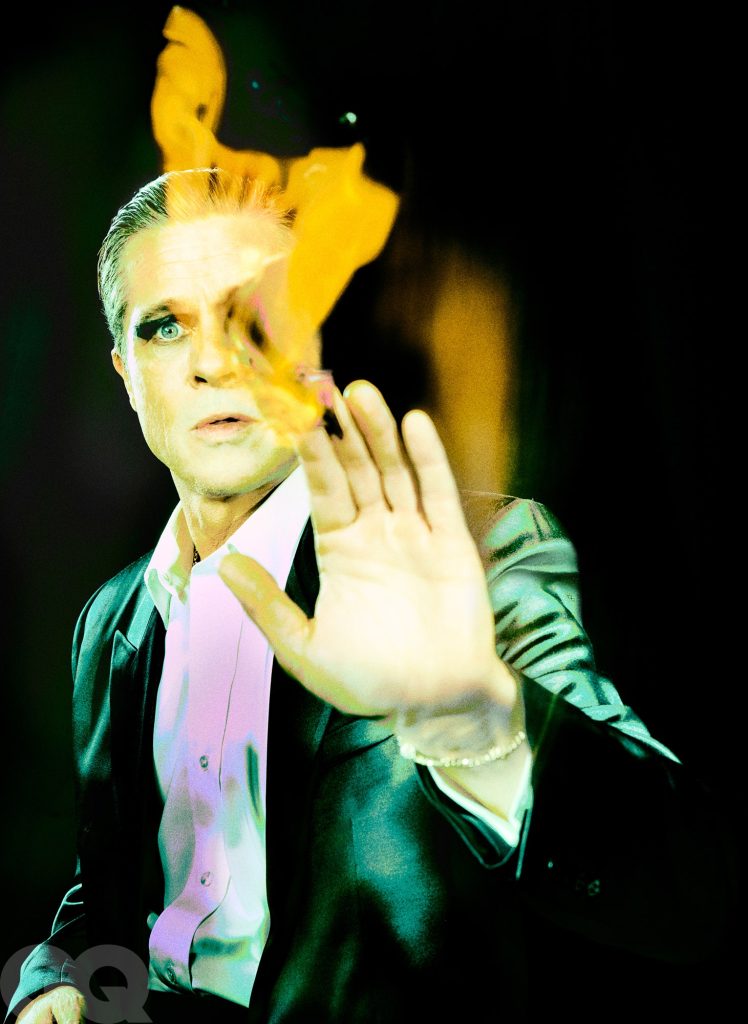 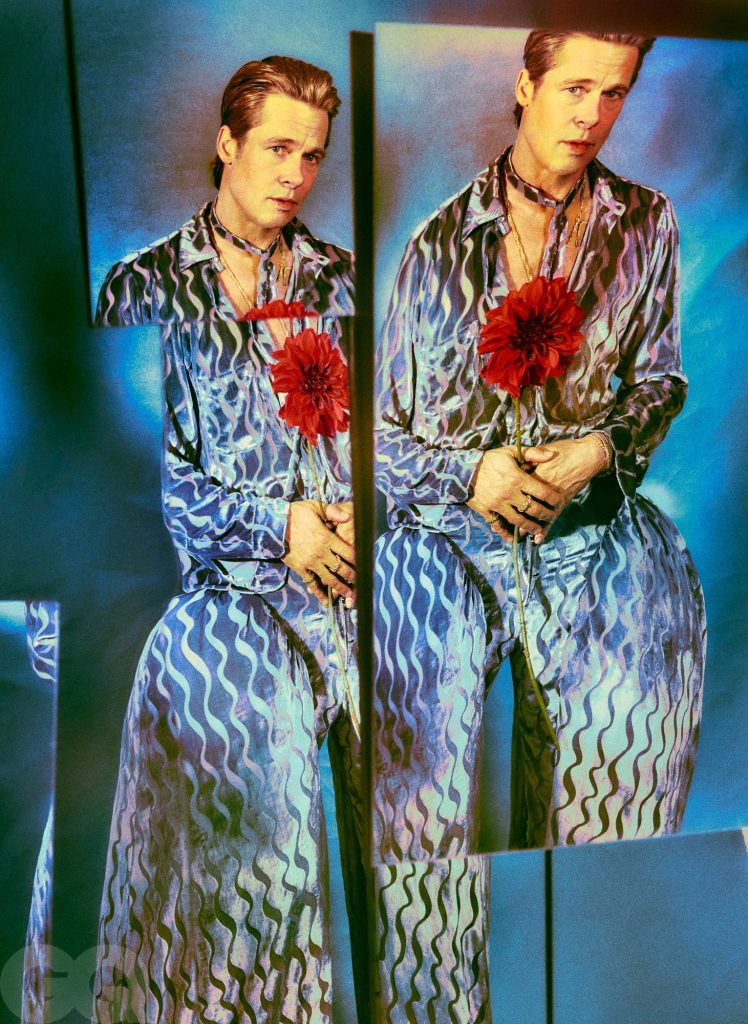 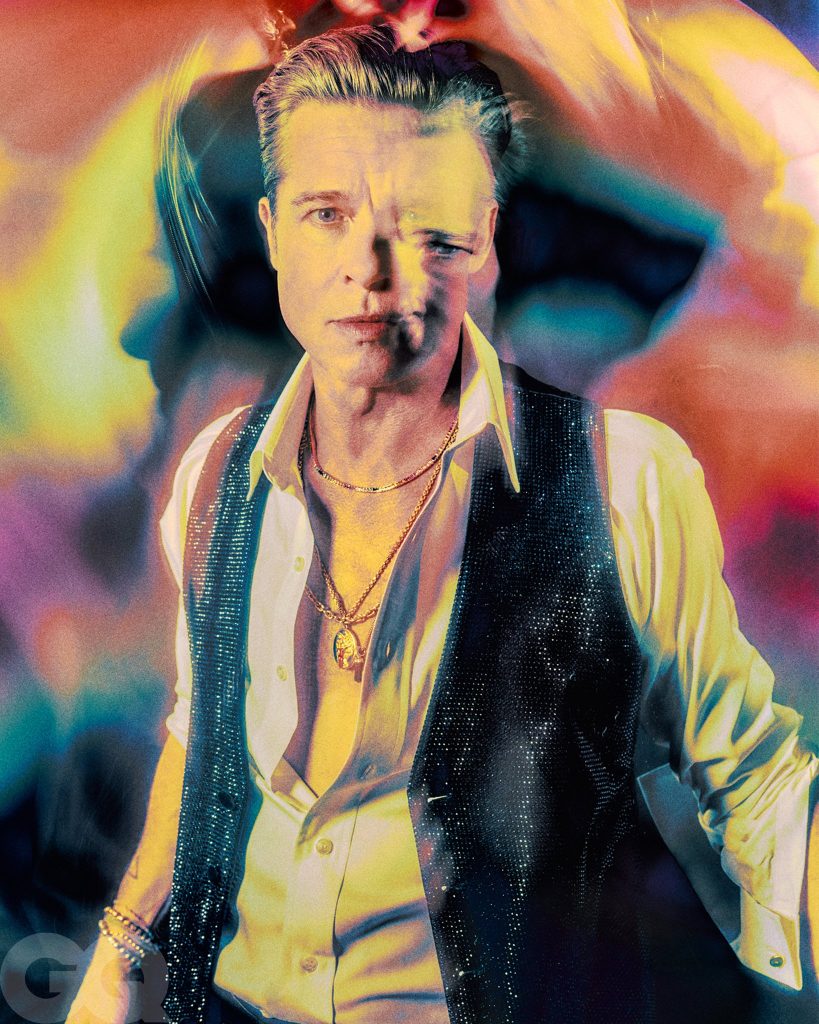 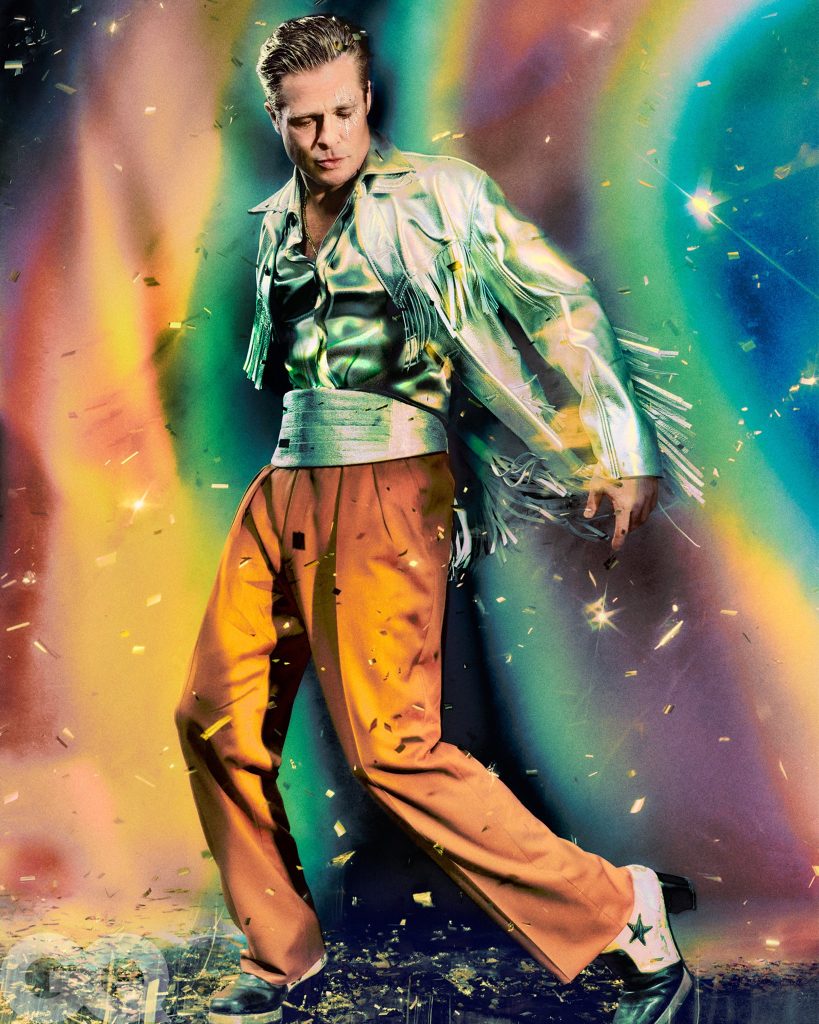 Excerpt from “The Guardian” review of the photo shoot:

“Look at the cover. It’s extraordinary. Pitt’s hair is slicked back, he’s wearing a gold medallion and an extremely flammable-looking shirt, lying down on a bed of artificial flowers. His eyes are open. He’s wearing mascara. He looks, not to put this indelicately, like some undertakers have tried to pretty up his corpse before his family arrives for a visit. Oh, and there’s a lizard crawling across him.

Amazingly, this is the least startling setup of the shoot. Scroll through the interview and you’ll see Pitt dressed like a Jim Morrison waxwork having a stroke, chewing his finger while dressed in a bright yellow safari suit and hiding out in the spot where they dug up Billy Batts in Goodfellas, dressed like the Czech Republic’s 14th-best stage magician, and doing an A+ impression of Tino the Artistic Mouse from Hey Duggee.” 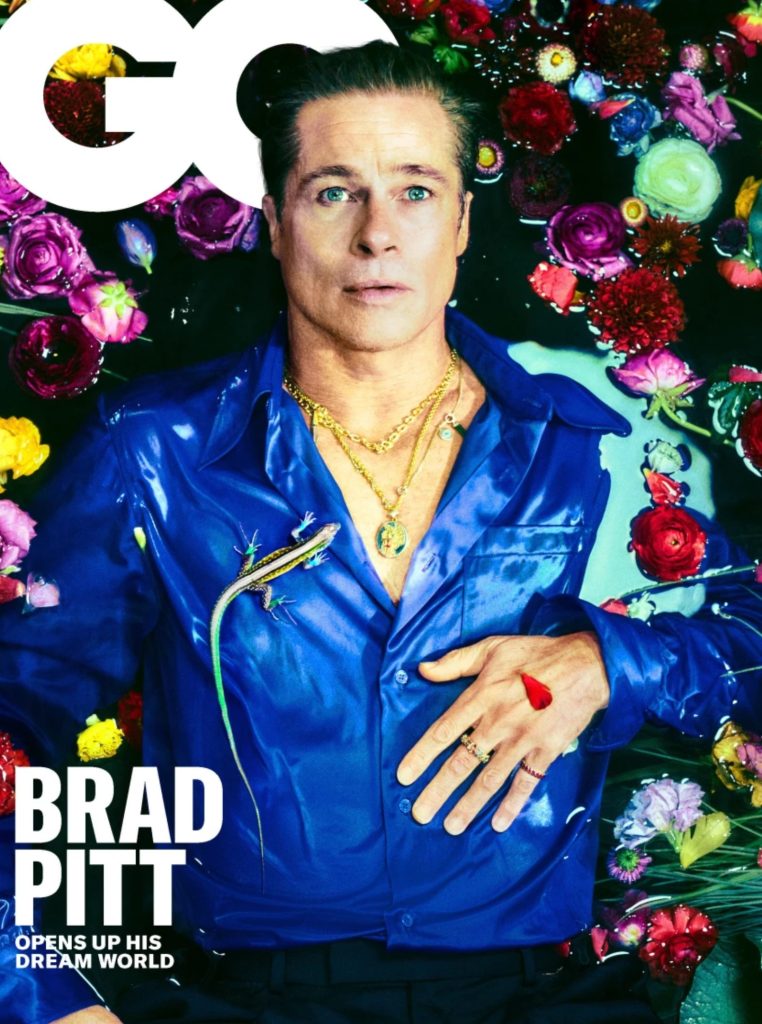 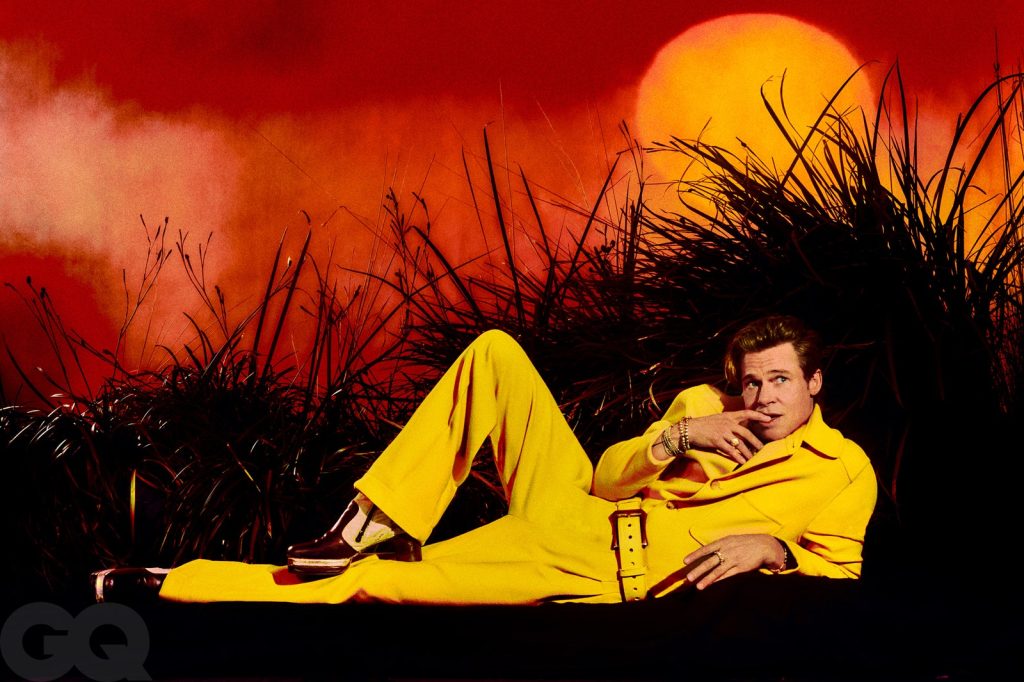 Hopefully VC does an in-depth analysis as there are a lot of symbolic references and meaning to this spread for sure.

He is not only wearing mascara, there is also eye-liner and lipstick that makes him look quite effeminate. Also, I am not sure his eyes are that green in real life. Seems like these pictures are overstuffed with symbolism – do flames coming out of his fingers mean that he has something to do with Phoenix? And the picture with a flower, reversed for some reason – is he wearing chaps? Why are his hips so large? “Deconstructing Brad Pitt” from a man to a very strange woman…

He is ftm trans, an inverted, like all in entertainment industry

Not everyone on the industry is trans. But both of his wives are men so that would make sense if he is actually a female.

Look at Angelina’s facial structure. People have been saying she is a dude for awhile now. And her dad was a actor and sacrificed her mother. So it would make sense that he would raise his son as a girl. Same with Aniston. Dad was a actor and the tv show Friends symbolically admitted that kids made fun of her in school because they suspected she was actually a he. It happened to be in the episode Pitt guest starred in and I think they said it in other episodes too.

Have you seen Angelina’s father? She’s a photocopy of him. That’s why her features are so very masculine.

What are you smoking? Trans this trans that. Have you seen him in the movie Troy? If this person is a trans chick then I’m a double trans convert from alien to reprile and back to alien. Not everyone is trans just because you think so. These accusations makes you non serious.

The entire photoshoot is an ode to the 4 horseman of the apo-Kali-ipsis and the unified Rhodesian sun deity, Helios.

The last pic looks like the outfit worn by Uma Thurmon in “Kill Bill”, but I have never seen the movie, so can’t draw correlaries.

The rest, according to my improved understanding, is their signaling the 4th horseman in, full-force.

The flower lake photos are very reminiscent of Ophelia by Sir John Everett Millais (based on the character from Hamlet). 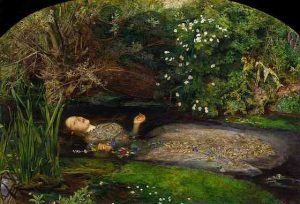 Yes. It again confirms he is dead in someway or will be in the future.

A clone like the Venture Bros. With some kind of metaphysical psychic connection to the trauma his clones have experienced.

A bunch of one eye signaling.

Poor guy. Or whatever Brad is. Obviously some kind of abuse is / has happened.

Mark Seigler did a drag shoot with Brad in 1998 for Rollingstone. I think this was the peak of his Fight Club fame. It’s a big club and we are not in it y’all. 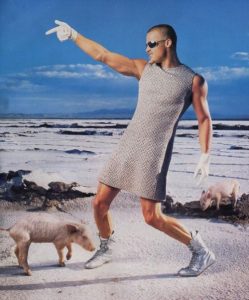 Thank God we aren’t in it.

Old man eyes – there is no way to cover up the little telltale signs that you are in your 50s.