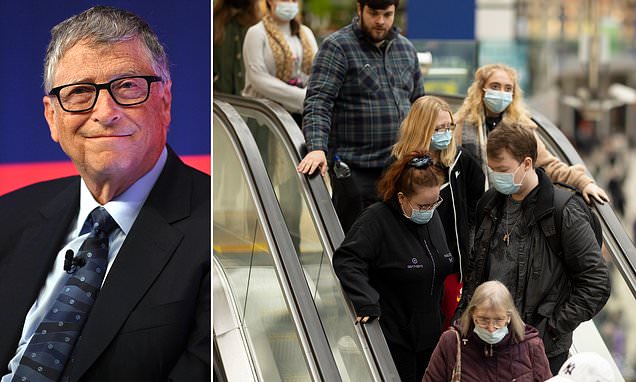 The tech mogul and philanthropist said he did not want to sound ‘doom and gloom’ but warned there was a risk an ‘even more transmissive and even more fatal’ variant could be generated.

There is no virus, no variants, nothing but lies and fear p**n. I believe the time has passed for non compliance to stop this and I’m sure the millions of cult members around the world will dutifully put their muzzles on and march willingly off a cliff for this pathetic puppet. I do hope awakening has reached a critical mass, but I highly doubt it.

I beg to differ. There is most definitely a bioweapon – at least one – more than one family member has been hit hard by it. But, not until after exposure to a vaccinated person.

He wasn’t kidding the first time.

Is he suddenly a doctor? Why is he constantly commenting on coronavirus?! It’s bizarre…

Look into his fathers involvement in AIDS/HIV science in Africa, masquerading as “charity,” and Planned Parenthood. They are, and long have been, NW0 Eugenicists.

I’ve definitely heard that he only pretends to help those in Africa and that he is really up to some very sinister stuff, especially regarding the children, sigh, it’s always the children. Supposedly there is/was some video clip of him admitting this. Anyone seen it or know what I’m referring to?

There is a full Lunar Blood eclipse on May 15-16th, visible over the entire eastern US and The Atlantic Sea (homeland of Atlantis) The vote for the WHO to strip all national legislative sovereignty is on May 22nd… Expect a change to a NATO treaty, or some NATO action to follow. NATO itself is an anagram from Aton, the Atlantean (Aryan) Sun God, of whom the only publicly available text is found in the city of AketATON in Egypt and reads as follows:

“Men had slept like the dead; now they lift their arms in praise, birds fly, fish leap, plants bloom, and work begins. Aton creates the son in the mother’s womb, the seed in men, and has generated all life. He has distinguished the races, their natures, tongues, and skins, and fulfills the needs of all. Aton made the Nile in Egypt and rain, like a heavenly Nile, in foreign countries. He has a million forms according to the time of day and from where he is seen; yet he is always the same.”

There is a full solar eclipse over Russia October 25th, and a blood lunar eclipse over the western United States, including cult of Isis headquarters temple in Arizona, on November 7-8, lining up exactly with the NATO lead state, USA elections. Expect chaos, leading to an advancement of new world order initiatives (Ordo an Chao) to ensue. Thanks for the warning Billy Goat, gatekeeper of the bills (money).