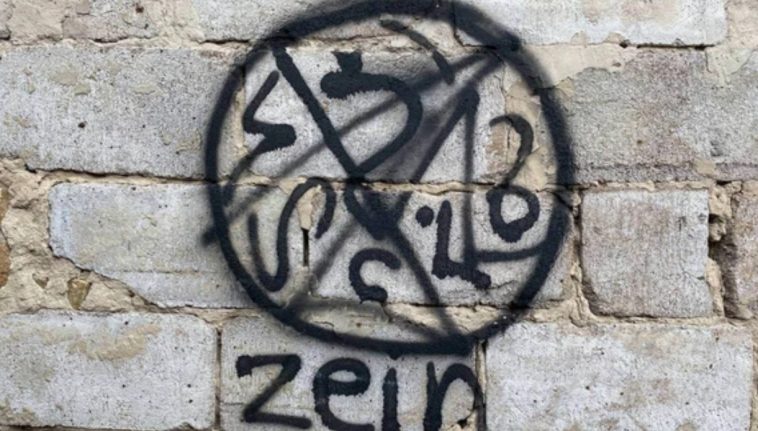 The Kremlin owned news organization RIA Novosti is claiming that its journalists discovered signs of black magic in a village in east Ukraine. The journalists claimed the evidence of magick was found in what it claimed was the headquarters of a Ukrainian military unit. “A satanic seal was found on its wall, evoking associations with Hollywood films about evil spirits,” RIA said in its report.

No need to try to demonize Ukrainians right now.

There certainly is when they support and fight for Biden’s puppet regime that’s waged war on the Donbass for nearly a decade.

yeah sure, every county of democratic international community should send at least $1 trillion to ukraine, no matter what, we can all starve to death but the ukraine must have our support, now US send $$$ 33 billion illuminaty jackpot to mr. holodomyr zelensky and the UK only want to send 1.6 billion??? what even is this??? come on UK, its not even 10%…we all should send our own sacrifice to protect the sacred border lines of ukraine

The devil and his minions are on the lose

The divide and conquer tactic clearly works. If you think Russia and Putin are any different, then you’re all mistaken. This is like saying Trump is different from the democrats and satanic elite. I have to laugh. News flash: It’s all orchestrated y’all. They are all in this together. It’s all for show. If there’s anyone on top that wants to genuinely stop the madness, then they’ll be dead already. Simple as that.

Propagandizing a fake war isn’t even the problem with this article. I’m sure this sigil is real, but the real problem is this statement ” To this day, none of the thousands of accusations of Satanic ritual abuse or Satanic cults are substantiated.”

Because they aren’t reported on, of course. As soon as they call this phenomenon “Satanic Panic”, people will just dismiss it. Vice writers are sell-outs, unfortunately.

The civils as always the true victims. A Iot of people dont know politics. Who could imagine that a democratic government in east europe would fund a n**i militia? The nazis searched occult Power. In the End of II war n**i scientists move to US, Brazil and Argentina and some of them keep working. No surprise that occult rituals are being found. Theres Also a lot of n**i past in poland and hungary region. Secret operations and societies.