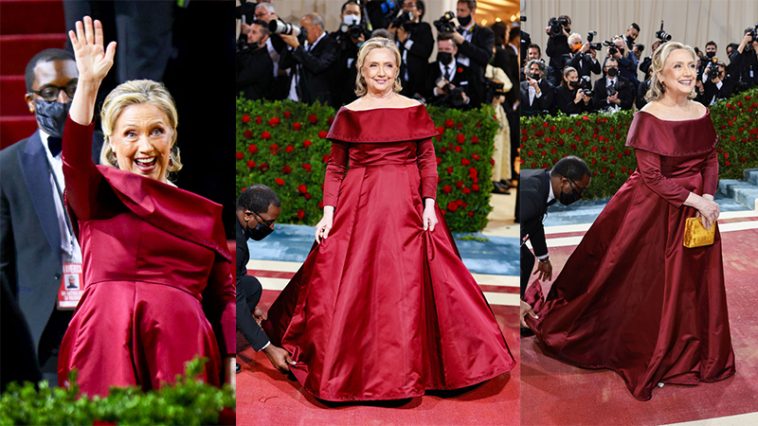 Hillary Clinton drew criticism Monday for turning up maskless at the Met Gala where her ‘regal’ gown was attended to by a masked black servant in what has seemingly become the norm at these kind of events.

Vareity described Clinton’s gown, which had women’s names sown into it, or something, as ‘Regal’

I don’t think that’s actually her. It seems to be a look-a-like.

Clone/double/imposter replacement, u name it…

The race-based outrage is unnecessary, but I find it so jarring when only staff are made to wear masks. It’s such an immediate signifier of who’s in the club and who is not. There is also a ritualistic aspect to it. Now that the elite are reveling their plans and no longer have to hide like they did for hundreds of years, the lower classes are the ones who are forced to hide their identity and mask themselves
People just don’t like Hillary Clinton. Even normies can sense the evil emanating from her.

The staff wearing masks is sensible and a requirement as I understand it. Race does not come into it,stop being sensationalist

You’re kidding me!
So the assistant hired to help her us a person of color,who chose to wear mask?that’s not anything like her being a slave owner.
The author of this dreb sats she has some names on the dress… Completely and obviously trying to ignore the significance of the names! And she commissioned the dress from an artist who was in prison. This isn’t evil. Shea supporting a prisoner by hiring them when they need work the most.
Infowars is a joke. If you take anything said by them you are a joke.
I would think this is funny if it wasn’t so scary to see how dumb people are.
I’m hoping the op just reads the headline,and if they end up reading the entire thing will delete. I can’t accept that people are really this dumb

All the staff had to wear masks