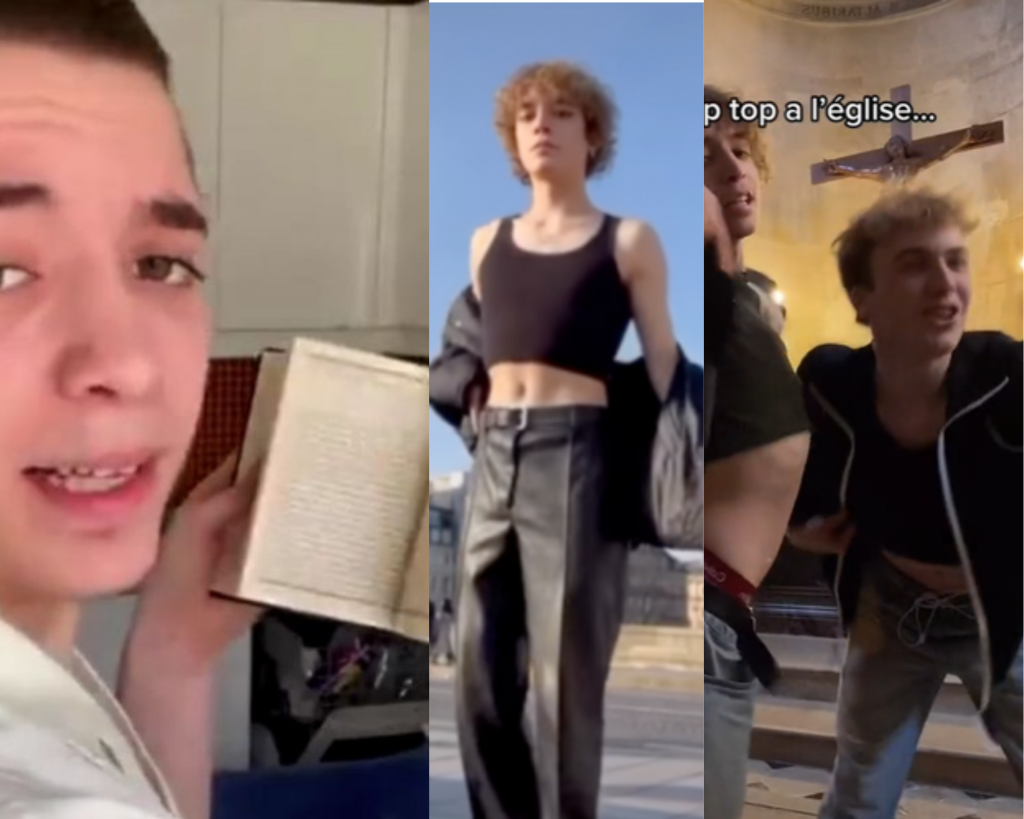 It all starts with a video of a young man who decides to twerk in a church wearing a crop-top: 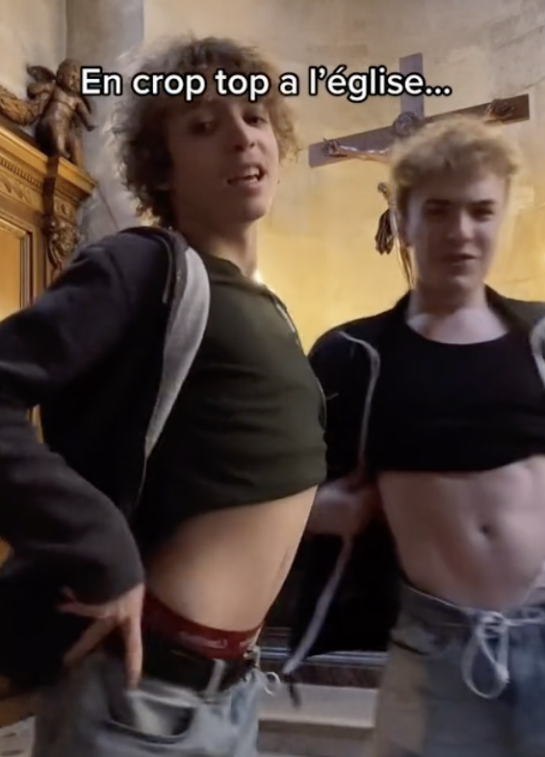 To maintain his buzz, he had decided to redo a tiktok where he called his mother, telling her that he was planning to twerk in a mosque or a synagogue, his mother on the phone begged him crying to stop, afraid for her son who received death threats and people prowling around his house at night

Despite the hatred and indignation he has already aroused, he has not decided to stop there, after a video where he cries wishing that everything would stop and that he needed help, he posted the very next day a video of him wearing a yarmulke dancing sensually and heavily made up, causing further outrage 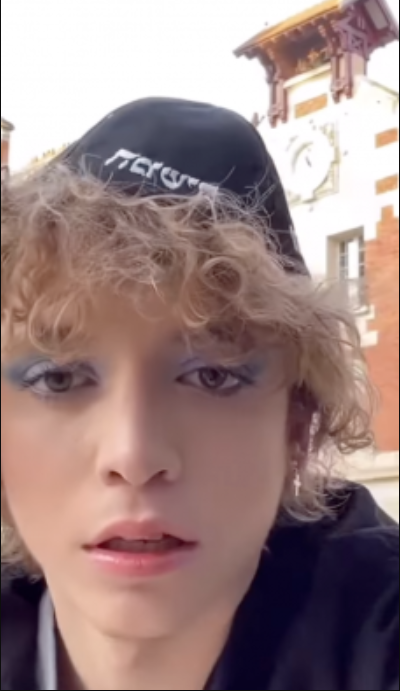 He then decides to attack Muslims by posting a video where he cleans a window with a Koran saying “everything that is written in these books is not very interesting, so we can use it to clean a window, to stall a furniture or a door” 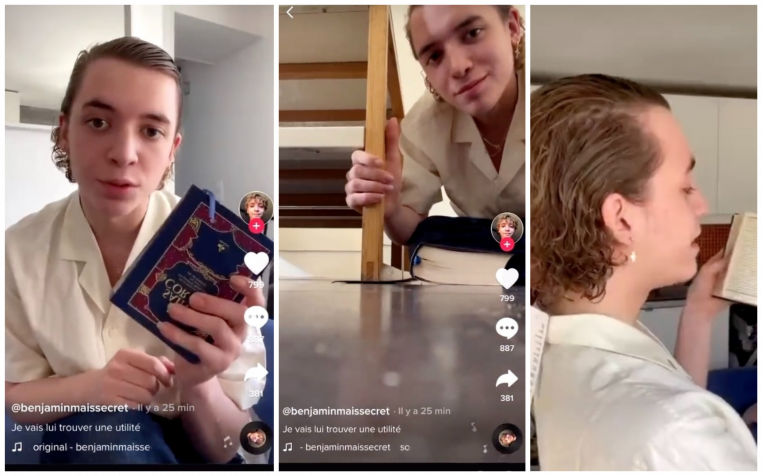 The situation got out of hand to the point that another tiktoker ended up physically attacking him. 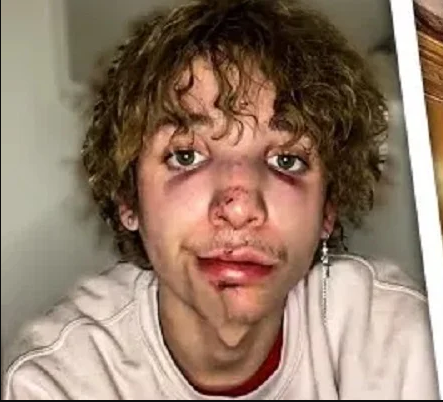 He continues by making a video again with his mother who yells at him to stop, then in the middle of Ramadan disguises himself as a veiled woman, sells naked photoshaving, made caricatures of great religious figures, then rubs a cross against his body filled with white paint (thanking the gods for sending him sp*rm from the sky) 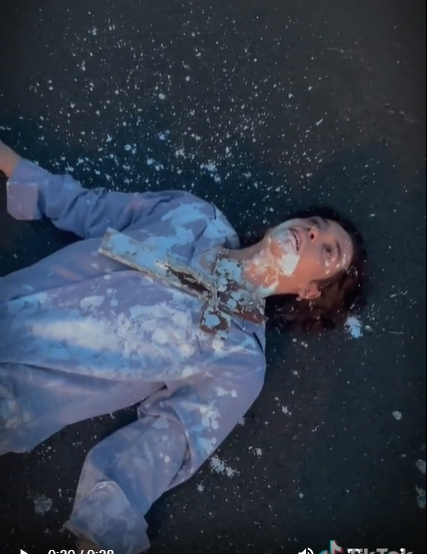 He will finally be condemned for having entered a place of worship without the agreement of the priest, but having already launched heated debates on the TV sets and social networks on the right to blasphemy.

This story comes after a story that made headlines when a young woman made comments that forced her to be put under police protection:

Although many people are indignant at this kind of disrespectful remarks, many have fun and reproduce the same scenario in search of recognition, and thousands of religious people who feel less and less respected in a secular country 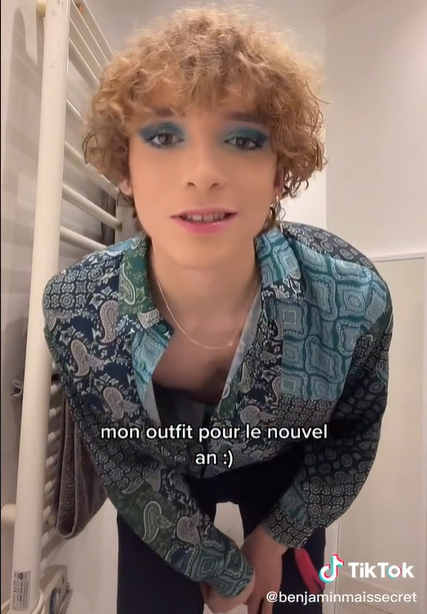 I don’t see why we need be offended. This display does nothing to God, it only demeans this human and those who cheer him on. Far worse, IMO, that he places his mother in danger and laughs about it.
Sometimes, we just have to realize that, despite what the person behaving like this may think, he’s not talking to/about me. His anger and hostility don’t pertain. He is lashing out at whatever his mind has conjured or with whatever his spirit has invited in. Has nothing to do with me or with my God. God definitely does not need my petty offenses to defend Him.

Even though him going this far for blasphemy is just plain cruel. The fact that he is making fun of his own mothers cries begging him to stop is really what shows the type of person he is in my opinion.

He doesn’t follow any religion because then he wouldn’t be able to parade around in those outfits anymore.

Good. Call me when there is a religion that is not so uptight.

When God creates men and women in Genesis 1, it’s after creating opposites in every other corner of creation–day and night, land and sea, flying birds and swimming fish. Humans, then, are also created in an opposite pair–male and female. But the problem with a literal reading of this text that even though Genesis 1 sets up these binaries, God’s creations exist in spectrum. In between day and night we have dawn and dusk; between land and sea we have coral reefs and estuaries and beaches

Mental illness. This young man needs help. He’s unstable. One of the cluster B personality disorders. Where is the father? He seems to have had little discipline or guidance in his life. He will draw a reaction proportionate to what he is doing, from people who take the actions of a deranged man personally. Unless he gets help this will not end well. Poor lost soul.
Too many equate freedom with degeneracy. Freedom ALWAYS comes with responsibility. Always.

I think that no legal, physical or written response should be given. God doesn’t need papers or buildings. The devil has more insidious ways than this. Trying to stop such actions doesn’t mean protecting something. Our responses will not heal him. It only gives him the victimhood he seeks. Just ignore it.

I know these people are insufferable but remember the importance of free speech. We wouldn’t be able to discuss the cabal without the right to talk freely.

These are very young people and clearly being led astray by the culture. I remember how confused I was at that age by the messed up cultural messages I was getting, and it is far worse now. I think the best thing to do is pray for them. I finally got the information I needed to figure things out, I hope they will, too.

i bet my fortune that this degenerate freak never mock judaism…because we all know why after all, don’t we?

He did. It showed him with a yarmulke on and it even had yiddish or Hebrew on the hat. He’s not in the industry.

ah sorry, i just read whole article, he or she or whatever the hell is retarted for sure, something like this needs a psychiatric help and discipline from its family members and the rest of us, just better to ignore it for it seeks our attention

No he didn’t really…he insults Christians and Muslims, disrespects them but he just wears a yarmulke…that ain’t the same thing at all. If he dared go to a synagogue et do what he did in a church, then yes.
So stop your BS with your “and it even had yiddish or hebrew on the hat”. You put that at the same level with what he did with Christianity and Islam…you’re a P.O.S. too for suggesting what you’re suggesting.

So you insult me for no reason. Wow! I feel like I’m at work. The guy didn’t read the post at all and assumed he didn’t do anything with Judaism. He still did some form of insult to Judaism even if it wasn’t as bad since before he planned to stop by the synagogue he was getting death threats and being stalked. But eventually resumed his more vulgar activities probably telling himself he’s a fighter. And he looks nothing like a Jew. You usually have to research the last name to determine if he’s one for sure not the first name.

BTW, he looks quite jewish to me, and Benjamin sound quite hebrew too…

Ask God to help this lost soul, he loves all humans on earth even those who did mistakes