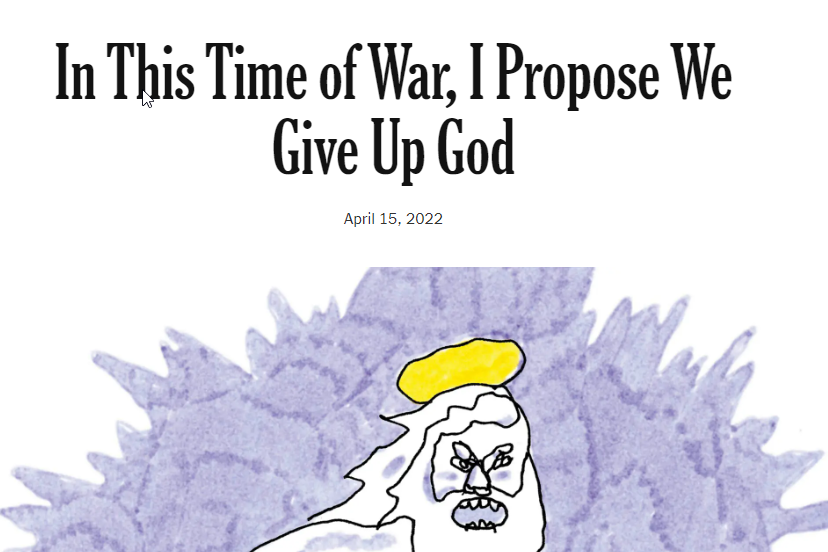 “God, it seems, paints with a wide brush. He paints with a roller. In Egypt, said our rabbi, he even killed first-born cattle. He killed cows. If he were mortal, the God of Jews, Christians and Muslims would be dragged to The Hague. And yet we praise him. We emulate him. We implore our children to be like him.

Perhaps now, as missiles rain down and the dead are discovered in mass graves, is a good time to stop emulating this hateful God. Perhaps we can stop extolling his brutality. Perhaps now is a good time to teach our children to pass over God — to be as unlike him as possible.

Killing gods is an idea I can get behind.”

The Synagogue of Satan never fails to offend the Most High. Let the veil of blindness be torn from their eyes.

Let us know how that works out for you Mr. Auslander.

My people are destroyed for lack of knowledge: because thou hast rejected knowledge, I will also reject thee, that thou shalt be no priest to me: seeing thou hast forgotten the law of thy God, I will also forget thy children.

I would consider myself to be agnostic but spiritual, I don’t 100% believe in God (please do not take this as an invitation to preach to me), but I don’t 100% disbelieve in Him. I’m open to the possibility of God existing, but I firmly believe that no other human being will ever sway me in one direction or the other on this topic. I feel that religious belief is deeply personal and not to be taken lightly.
I also remember a time, not so very long ago, as a child being taught that outright asking someone about their religious (or political) beliefs was extremely offensive… That if someone wanted to express their beliefs, they were free to do so, but it was the height of impropriety to ask unprompted. Now we live in a time where, not only does everyone overshare their entire lives (beliefs, physical/mental ailments[real or imagined], sexual orientation, “gender identity”, etc) online, but also… It’s now socially acceptable for an incredibly successful newspaper to publicly defecate all over the most practiced religion on the planet.
It’s extremely offensive and should be offensive not only to Christians, but to Muslims, Jews, Hindus, agnostics, even atheists.
It represents more than just the affront to God and Christianity as a whole. It’s also saying, “Look, we can desecrate that which is most sacred to you, millions upon millions of you, publicly for all to see, and not one of you can do a thing to stop it. We can attack the most beloved and personal aspects of your life, slander you and everything you believe in, and wrap it up in an intellectual, social-justice-warrior package. Huge swathes of the internet will agree with us, to subjugate you, and we will continue to erode the public attitude against you until there is nothing left. What might we do next?”
I HATE these people! I want the madness to stop. I used to be afraid. Now I’m angry. I’m angry that my life and future have been stolen from me by psychopaths, I’m angry that children have to grow up in this horrible world, I’m angry that all the wrong people keep reproducing, I’m angry that good parents don’t get the chance to raise their children in a world where the future is guaranteed, and I mean that literally. We may very well literally have no future. We know what these f*****s’ plans are. I’m sorry but I’m so angry it takes all of my restraint to stay civil when expressing these thoughts. Normally I censor myself for the benefit of the many religious readers here. I’m just so tired of all this.
And on a more personal note, I am so disheartened by the total lack of people irl who can talk about these things. Reality. I only find solace in places like this, where the free-thinking, self-educated people congregate. At this point, I would give my left foot to have just one real-life friend who is awake and aware of what’s going on. I feel my sanity is waning after so many years of being awake, alone, to the horrors.
Apologies, brevity is not my strong suit. Nor is optimism, as you can see. I’m just so frustrated and tired of this world. I recently turned 27 and I couldn’t believe it, it feels as if life has been on hold for the last several years (and I mean pre-corona; corona was the crescendo to a long symphony of bs). I feel as if I’ve been living in a fugue state, and any minute now, I’ll wake up. I wish it were so.

A big hug to you, friend.

I am one of the Christians, and I do appreciate your assessment. You’re right on about their arrogance in publishing this before Passover and Resurrection Sunday.
If I can encourage you–one of my treasured friends is another, secular, homeschooling mother a few houses down the street. I was vocal about pushing back against masking and the scamdemic from the beginning, and I couldn’t tell what she thought. Little by little she started taking more risks speaking out, too. I think she’s lost a lot of friends, but I’m so grateful to have her in my corner (literally).
There are more of us out there! We find each other and encourage each other by speaking up. May the Lord Jesus bless you, encourage you, and draw you towards Himself as the Truth and the light in the darkening days ahead.

She is lacking context. This says it better than I could: https://bible.org/seriespage/q-was-god-cruel-egyptians-exodus