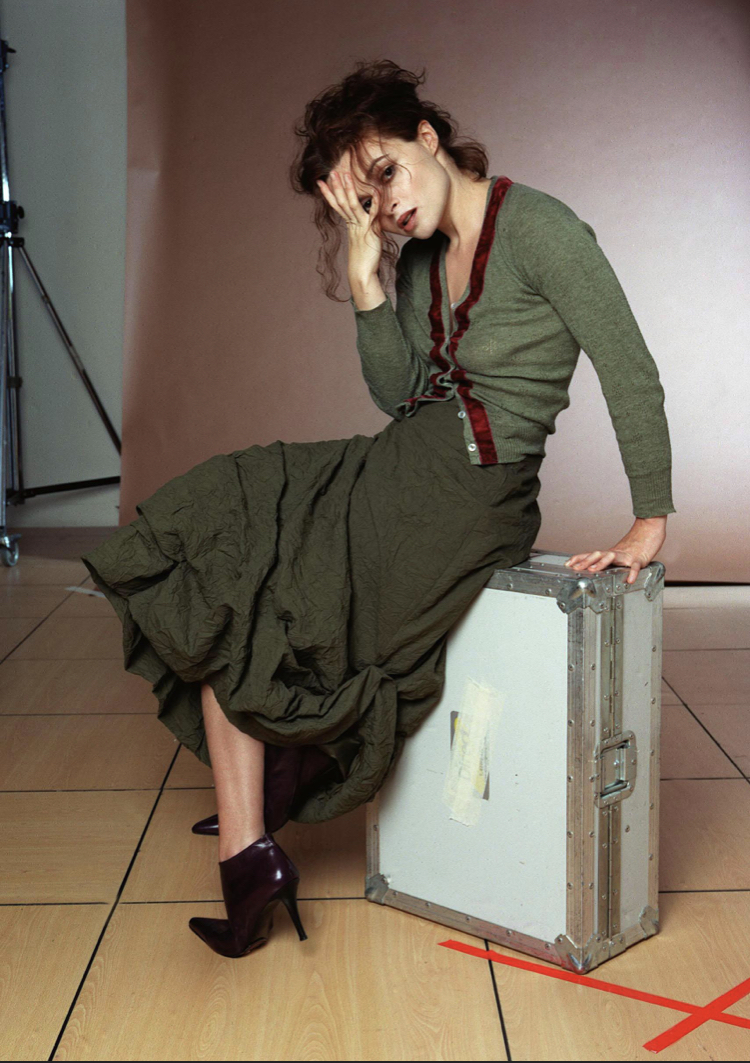 Helena Bonham Carter, who is CBE or a member of  “The Most Excellent Order of the British Empire” (British Chivalry) from her fathers side of the family and a Rothschild from her mother’s side of the family, is also an actress who does one eye symbols and seemingly only takes on roles in suspicious movies.

She is known for her roles in movies like:

Hamlet (1990) – Work containing murder and ghosts. Further, there is no concrete proof of this but Shakespeares work is speculated to all be written by Sir Francis Bacon, a confirmed 33rd degree Freemason.

Mary Shelley’s Frankenstein (1994) – a movie about animating a corpse

Mighty Aphrodite (1995) – Aphrodite, who as the goddess of Sex is a target of worship and summon amongst Sex Magick rituals in witchcraft

Fight Club (1999) – a movie about split/altar personalities, one of which commits dangerous crimes
Wallace & Gromit: The Curse of the Were-Rabbit (2005) – a children’s movie, but still about curses and other occult subject matter

and a list of self explanatory dark Tim Burton movies like Corpse Bride (2005), Charlie and the Chocolate Factory (2005) (Roald Dahl was very into symbolic telling of mind control) Sweeney Todd: The Demon Barber of Fleet Street (2007) as Mrs. Lovett, Alice in Wonderland (2010) as the Red Queen, and Dark Shadows (2012) (a movie about cannibalistic vampires who answer to demons.)

Many of these movies also star Johny Depp, who was a subject of a Vigilant Links post recently about his connection to satanism.
This is all interesting to speculate, as many stars make one eye symbols and seem to be interested in the occult, but Helena is worth noting because she is British Chivalry on her fathers side, and again, a direct descendant of the Rothschilds, possibly even being named after her grandma, Helenite de Rothschild.

This was all information found just on her Wikipedia page, for anyone to see. I’m sure a deeper dive outside of a controlled narrative would provide more.

The question remains: are there any tentacles of pop culture NOT touched by programming from elite secret societies? Hard to say.

I pity her actually. She was raised as a child into this evil family. Taught false ideas and traditions.

I pray that someday her eyes will be opened to the truth.

It says her grandmother’s sister married a Rothchild, but not that she is a blood relative to them. Still probably a creepy connection tho

Always new something was up, such a talented actress. Could her soul be saved somehow?

How about films that have nothing to do with satanism? Like planet of the apes, not unless that’s some secret hidden dark agenda film lol

Planet of the Apes- manipulation of the human genome and slavery, among others

It was originally a French satirical novel. Get your facts right rather than spouting rubbish

Quit moving the goalposts. We’re talking about the film with HBC, which isn’t satire.

It’s a future earth with genetically manipulated ape/human hybrids. You also didn’t refute the slavery. What are you going to do for a third strike?

No there aren’t human ape hybrids, I suggest you watch the film again or maybe watch it for the first time. Give your arse a rest and your mouth a chance. You just come off looking stupid.

Says the person who is making an ass of themselves. The apes in the film were genetically manipulated. Period. Nothing you can say or do will change that. Being a gamma isn’t a good look for you.

She’s married to Tim Burton… haven’t you noticed the she and Johnny Depp are probably in every single one of Tim Burton’s films???

Seems to be an orange upside down cross taped to the floor as the cherry on top.

I’m sure she does have links to the occult elite but some of your accusations are wrong in my opinion. There is no illuminati symbolism in The Curse of the Wererabbit – it is a fantastic and wholesome family film set in Yorkshire. The Harry Potter stories actually promote great values of standing up to evil and fascism which is likely why they are being torn down today by the trans mob.

Honestly the only thing being torn today is JK Rowling herself for her ‘polemic’ views that she tweets about.. it’s not the books people accuse of ‘transphobia’ but her, because of the stuff she says online.
Harry potter it’s literally about witchcraft, sugar-coated of course you’re not going to find some Aleister Crowley teaching but it is about withcraft and the more people are interested on it the more they seek occultist books and derive away from the Lord.. even if you don’t believe in the Lord Satanists do and that’s one of their goals . It’s very evident.

But Occult doesn’t mean Satanic either. In fact, there are many, MANY esoteric /occult books that will reveal more about Christianity and the beauty of Christ, and spirituality, than what the church wants you to read. Look into non-canonical text. Do your research.

It’s these ignorant fanatics that are taking anything spiritual, seemingly non-Christian and calling it Satanic. Occultism is NOT inherently Satanic by any means nor is any esoteric spiritual tradition that is not Christianity. Sadly, as a Christian, so many folks refuse to truly educate themselves regarding Christ Consciousness and the spiritual nature of Man. The powers that be have kept the truth from us for centuries regarding our spiritual nature. Most of these QANON folk still think Jesus last name was Christ and any non-canonical text are Satanic. It’s sad. Spiritual warfare is real. But many of you are intentionally being led down the wrong path. You awaken to this knowledge for the first time and think you’re Neo in the Matrix. Do the real research, dig deep, educate yourself. Jesus was an Essene who practiced Gnosticism. There is so much truth beyond the Bible, so much spiritual knowledge out there waiting for you. I’m tired of these armchair theorist who just get their info from YouTube and tik Tok. Wake up! Your being fooled!!

Watch Sweeney Todd again. Chalk full of double speak or whatever you’d call hidden double meanings in the lyrics. Lots and lots of occult references to eating humans / animals being a Satanic as above so below travesty.