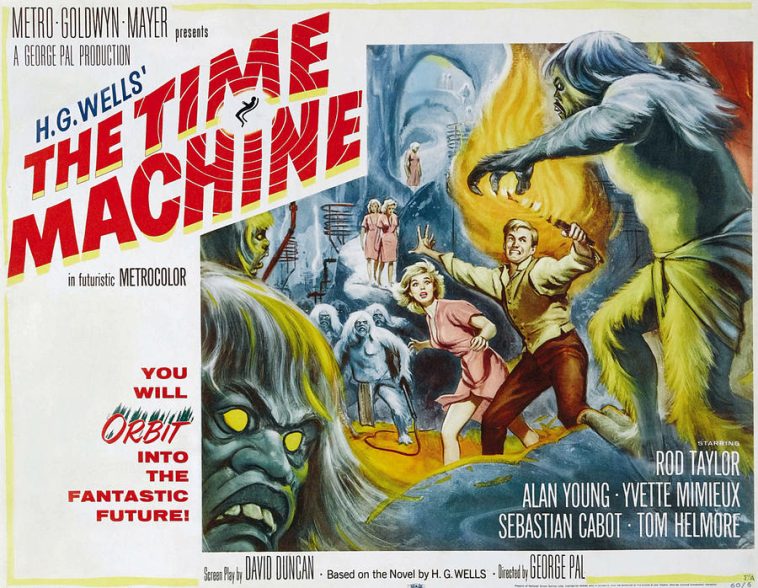 The Time Machine movie from 1960 is based on H G Well’s novel published in 1895. In the movie, The Time Traveller (George) who is the inventor of the time machine says at 19:35: “The truth is, I don’t much care for the time I was born into. People aren’t dying fast enough. They call upon science to invent new, more efficient weapons to depopulate the Earth.”

The Time Traveller goes to the year 802701 and discovers a society where human race is separate in two categories: Morlocks who live underground, afraid of daylight and fire, in dark, satanic mills where they feed on the Eloi, that they “harvested” at maturity.

Some talking rings loaded with data from the past reveal that a 326 year war destroyed the environment and caused humans to divide into those two classes: the demons underground preying on the innocent living on the surface. There is no government and no laws, only submission and terror. Interesting how victims are hypnotized with a pitch sound to make them enter the caverns to be sacrificed (at 1:14:23)

Other crazy lines from the movie:

” We have no government… Laws? There are no laws.”

“-Who are the Morlocks?

-They give us our food and clothes. We must obey.”

“I hoped to take back the knowledge and advancement man had made. Instead, I find vegetables. The human race reduced to living vegetables.”

“The war between the East and West has at last come to an end. There’s nothing to fight with and few left to fight. The atmosphere has become so polluted with germs that it can no longer be breathed. There is no place left that is immune. The last factory for the manufacture of oxygen has been destroyed. Stockpiles are rapidly diminishing and when they are gone, we must die”

“You should know that I am the last who remembers how each of us man and woman, made his own decision. Some chose to take refuge in the great caverns and find a new way of life below the Earth’s surface. The rest of us decided to take our chances in the sunlight, small as those chances might be.”

“From the talking rings I learned how the human race divided and how the world of the Eloi and the Morlocks began. By some awful quirk of the Morlocks became the masters and the Eloi their servants. The Morlocks maintained them and bred them like cattle only to take them below when they reached maturity. Which explained why there were no older people.”