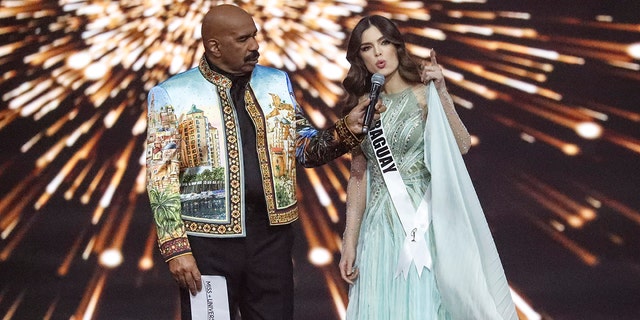 VC had mentioned the Steve Harvey incident on his site but I could not find it. Here they are trying to humiliate him for a third time!

The longtime Miss Universe host, who has a history of gaffes, made yet another miscue during Sunday’s competition.

After announcing South Africa as the second runner-up, Harvey turned to the two remaining contestants – from countries Paraguay and India – and began by saying, “Congratulations Portugal.” That’s when the host caught himself.

Harvey might have been referring to the 2015 Miss Universe competition, where he accidentally announced first runner-up Miss Colombia as the winner, instead of the actual winner Miss Philippines.

Or he could be talking about the 2019 pageant, where the host set up a video package by referencing Miss Philippines when it was actually Miss Malaysia. He chalked it up to a teleprompter miscue for that one, much like this year’s mixup.

…. Sekhon asked Harvey for the mic and quickly made sure to correct the mistake, explaining, “It’s not Philippines, it’s Malaysia.” Harvey was quick to explain that this mishap was not, in fact, his fault, but stemmed to a teleprompter mistake. “Well, let me explain something, I just read that in the teleprompter,” Harvey said, before turning to the producers in the control booth. “Y’all gotta quit doin’ this to me. I can read! They are trying to fix it now, but this is what they did to me back in 2015.”……..

…..Flowers and sash are taken away from Miss Colombia Ariadna Gutierrez, left, before being given to Miss Philippines Pia Alonzo Wurtzbach, after incorrect named announced……

I really wish word would get out for people to stop aiming for “fame”, it’s just useless constant humiliation, illuminati control, and groups of people stealing your hard earned money, or worse case scenario, it’s something far more demonic.