The government killed a little girl via lethal injection in the first episode of The Last of Us.

The fear propaganda in the intro scene is very covid / pandemic related. Check it out here.

Fear propaganda ? And how about all the people Catholic Church burned for disagreeing/disobeying them ?

I recently learned that the Catholic Church actually murdered people who read the Bible. The Catholic Church is a babylonian pagan religion that tries to include tenets of Christianity in order to try and create a one world religion. However, history shows that the w***e of babylon is drunk with the blood of all of the real Christians that it has murdered.

Reminds me of all the people who act like Trump isn’t filled with the spirit of anti-Christ.

I was with Trump for awhile but its obvious he is a sellout who is such a narcissist he ONLY looks out for himself. He keeps pushing the vax cuz he is profiting off it big time!!! Ron DeSantis is the guy to vote for in 2024!!! He isn’t a big talker like Trump but rather a man of action! Plus he isn’t an out of control narcissist like Trump. I don’t think Trump is the AC cuz he us supposed to lead Europe not the US. He has many of the characteristics and anything is possible but I don’t think he is the one. I do think he is laying the groundwork for the AC by setting up conservatives!!!

Have you read Alexander Hislop’s books on this subject? They most definitely TRIED (thankfully they didn’t succeed) to kill all the true Church members of the church Jesus started and then replaced it with Satan’s counterfeit! The White Horse is definitely riding now!!! Glad to see you were woken to the truth. Spread this everywhere you go before the real evil persecution starts against us true believers by the Synagogue of Satan!!! Watch your back. God be with you and all of us true believers! 🙂

Not only was their fury turned towards God fearing saints but also the dead christians were pursued in their death and their remains desecrated through burning to “prevent resurrection” after the final trumpet.

The RCC believed and taught soul sleep doctrine, resurrection of the dead from the grave, as we usually see in Halloween movies the dead crawling from their graves.

It’s only after ‘vatican II council’ these views were discussed and the church left the choice of either traditional burial or cremation to the will of the deceased. The priests were then allowed to hold memorial for the dead at the columbarium in 1966. 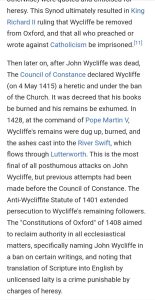 It was a boy with long hair

Not watching/gonna watch that MKU show – looks like a child ‘actor’ actually being MKU’d for “entertainment”; just (lightbulb…) dots connecting themselves in major/mainstream media –

That 4th photo explains the Baal-enciaga runway show exactly… the babies in their kangaroo carriers & toddlers (smaller than the child carried in arms above) inside their oversized bags are (metaphorically) sedated… the majority of the show is what one iteration of Human trafficking looks like (there are so many; this re: the open/easy border pathway)… the neck spirals symbolize the serpent = lucifer (my last link includes a photo of 2 people with an actual snake wrapping their necks)… the glitter Dutch clogs have to be a nod to … something instrumental to trafficking… somebody help me out with that…
models look drugged/humiliated/MKU’d, especially the last dude with all the hardware & bag handles on upper chest/back… includes about 4-5 garments meant to be worn by the wealthy buyers of these ‘commodities’…
https://www.youtube.com/watch?v=wjPDCvKplh4
the invitation to that revealing spectacle appeared to be the property of someone who (was abducted) “lost” their wallet… explained away naturally for plausible deniability
https://www.insider.com/models-walked-down-muddy-runway-at-balenciaga-show-2022-10

And… more, obviously like that in the “fashion world’s high style” currently in-vogue and, literally, currently in Vogue
Vigilant Reports There’s Something Terribly Wrong With Gorsad Kyiv and it’s Worse than Balenciaga Gorsad Kyiv is a collective of photographers that collaborates with the world’s largest brands. Apparently, everybody’s ignoring the fact that…
“… One only needs to take a look at a few pics taken by Gorsad to realize one thing: There is something terribly wrong with them. Everything about their work refers directly to pedophilia, child abuse, and sex trafficking. Many children in these pictures appear deeply unwell as if they are actual victims of human trafficking that are constantly drugged and abused….
Gorsad is not an exception, it is not “underground” and it is not even “counter-culture”. It is mainstream. They were praised by CondeNast, the mega-conglomerate that controls an astounding number of magazines around the world. In fact, those who are NOT part of this sick culture are the ones who are shunned by the industry.
As seen above, numerous pictures Gorsad pictures involve children who appear unwell, as if they recently underwent abuse or trauma. Several pictures directly refer to pedophilia, child abuse, and sex trafficking. There are clear references to trauma, torture, violence, and death combined with celebrations of satanism and black magic.
In short, Gorsad graphically puts on display all of the obsessions of the occult elite, in the sickest way possible. If you think any of this is still a “conspiracy theory”, you might as well be blind because these pictures could not be clearer.“

those photos posted reminded me of this going on otherwise lately – realistic depictions: …clear references to trauma, torture, violence, and death combined with celebrations of satanism and black magic….”

That’s a good video for the archives. Thanks for the share.

You have any high quality source videos of his outdoor church service thing Kanye did? It doesn’t come up on Google and I don’t know what he called the event. It was like 2-3 years ago.