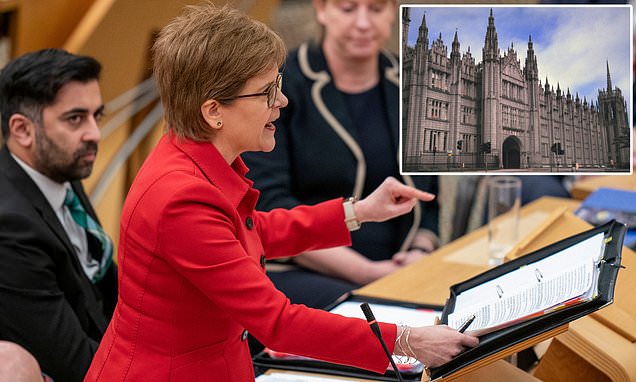 Scottish primary school children taking part in the sex and wellbeing study are told an answer to the question is ‘required’ to move on to the next page of the survey.

What is happening to Scotland?

I personally think they are so desperate to break from the United Kingdom that they are becoming the purest NWO/WEF lap dogs imaginable.

I’m Scottish and I live in Scotland. As desperately as some of us want to break from the UK, none of us want this. People are talking about it in the local shops – although I think that they have actually made that illegal. Hate speech and all that.

The illusion of the politics are complicated and manipulated – like everywhere else. The SNP are only in power because of a pact with the Greens (sound familiar?) and the flawed electoral system put in place by the Globalist poodle, Tony Blair.

As an aside, that creature Ardern was, at one time, Tony Blair’s tea-boy.

Anyway, Sturgeon (along with Alex Salmond) is a Ma sonic Trojan Horse. She has absolutely no intention of delivering independence. Her mission is to empty the public purse, destroy what used to be a tight-knit community (from the inside) and cause permanent harm to our children…in no particular order. She doesn’t care as long as she fulfils her mission. Look out for her bowing out, ‘gracefully’ a l’Ardern, in the near future.

I don’t know how many Scots have had the scales fall from their eyes, recently – but I’m guessing an awful lot.

Really interesting to read this. By ‘them’ I meant purely the political ‘front’ rather than the citizens, who I am sure are baffled and disgusted by recent happenings.

In my day, these ppl were referred to as “tartan Tories” they weren’t really a threat. This infiltration is reminiscent of the German nationalists.

It is time for the adults to come back in the room with this crap. They can’t arrest us all for wrong think.

They can and they will, prisons are now being built all around the world.
In addition, societies are so alienated, polarized that we need them to prevent us from killing each other.
For now, we only have peace thanks to them …