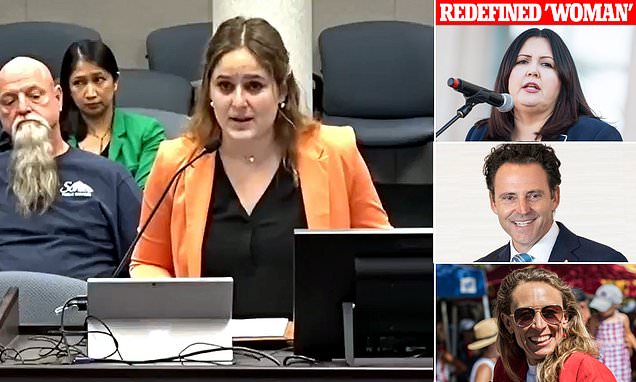 Rebecca Philips on Wednesday night made an emotional plea for Santee City Council for them to change their policies after she saw ‘a naked man’ in the YMCA women’s changing rooms.

She’s brave, wish more people had the emotion to notice and the courage to speak up.

The demonic/usurpers – the morally bankrupt addicted to stolen power – love it when we weep & beg them to stop tormenting & threatening us… it fuels them… they feed off our misery & low-frequency emotions that they manipulate us into feeling & expressing with their abuses-of-power. Begging & imploring those with no moral compass is a fool’s errand toward effecting a solution; she does however fall into the category of ‘sunlight is the best disinfectant’, and that is commendable in itself.

My heart goes out to this WOMAN (& all there at the time), who, imo, was encroached upon by a broken, disrespectful and deviant individual in a public place originally designated FOR WOMEN ONLY – who, along with the totality of that ilk as a continuum, is empowered by the equally misguided social class of usurpers & order-following minions who have stolen positions of authority to disintegrate our culture & make this “legal” in the first place.

But, don’t worry… This Never Happens

What a massive list, and this is only transgendered offenders. Incredible how the criminal justice (aptly named, because they’re the only ones getting any) system believes these sudden dysphoria claims only following incarceration, then sends them on to women’s prisons to prey some more from inside the system.
So many of these men are quoted as confessing they “hate women” generally, just because, or hate them because they can give birth. That hatred seems obvious to anyone paying any attention at all, but it’s usually vehemently denied.

The list is very much abbreviated – “…far from an exhaustive list…” he admits;
these are from one person’s aggregation, not continuously updated… and only represent some of those caught/charged/prosecuted with easily-accessible public records. Probably more that never are exposed, is a nice way of saying it.
Not to say all “T” people are violent offenders – the umbrella demand for “T tolerance” is like a beacon attracting criminals & a shield for them to hide behind… which may in fact be at the root of this mushroomed phenomenon.

“Tolerance is the last virtue of a depraved society. When an immoral society has blatantly and proudly violated all the commandments, it insists upon one last virtue, tolerance for its immorality. It will not tolerate condemnation of its perversions. It creates a whole new world in which only the intolerant critic of intolerable evil is evil.”
~ Hutton Gibson

The Transgender Lobby’s Demands Are Not Civil Rights
AND follow this money… from 2018, so a more current look is warranted…
“…Much more important than funds going directly to the LGBT lobby and organizations, only a fraction of which trickles down to assist people who identify as transgender, is the money invested by the men mentioned above, governments, and technology and pharmaceutical corporations to institutionalize and normalize transgenderism as a lifestyle choice. They are shaping the narrative about transgenderism and normalizing it within the culture using their funding methods.
This can hardly be a coincidence when the very thing absolutely essential to those transitioning are pharmaceuticals and technology….”
Who Are the Rich, White Men Institutionalizing Transgender Ideology?
Id like to cross-reference that list with the list of those funding the disintegration of US culture in all other ways occurring. Just sayin’.

I shared more links under the most recent “Miss Universe Owner…” post; includes some parallels with another ideology that may not in fact be other at all, but just another iteration in disguise; some well-examined personal experiencse; and an academic deconstruction (2 of her many available) by a very keen investigator & lucid, articulate observer who talks about the prison aspect of this as well.
Thanks for your comment @lgageharleya

Well that would be great if girls would weep instead ly down on bed with their leggs up in the air like an airplane after they see a p***s..normaly they dont and get pregnant all the time,also using their girls genitals to steel from men and seduce them with seks..weeping is a start oke abstinence would be better girls

You’re being misoginistic. It takes two for a tango and it’s not just women to blame, but men, too for lack of abstinence and morals.

The point of the article is way other than seks… it’s about the danger of losing teritory to the degenerated LGBTQ members. Traditional family, traditional values? We can soon kiss them goodbye?

Exactly. And not only that but women have to deal with creepy guys pawing at them and making them feel unsafe all the time. I’m not a woman but I have sisters and I saw the way some men acted towards them and also towards my ex-girlfriend when we would go out. Women deserve to have their own restrooms, changing areas, and other facilities. They shouldn’t have to sacrifice peace of mind and take on more risk just to cater to the demands of a mentally ill minority

Huh? This makes no sense, moran!

I don’t understand how it isn’t illegal. Regardless of YMCA policy this man exposed himself to a minor how is that not illegal?

The lines have been blurred. This is setting a precedent on pedophilia. It is the beginning of the normalization of perversity and people will reject at first then embrace later.

That is a line we can’t allow them to cross. I will never accept pedophiles as an orientation. They need therapy and IMO chemical castration until they can control themselves (which would be forever). Gay marriage is none of my business but normalizing abuse is something that should never happen