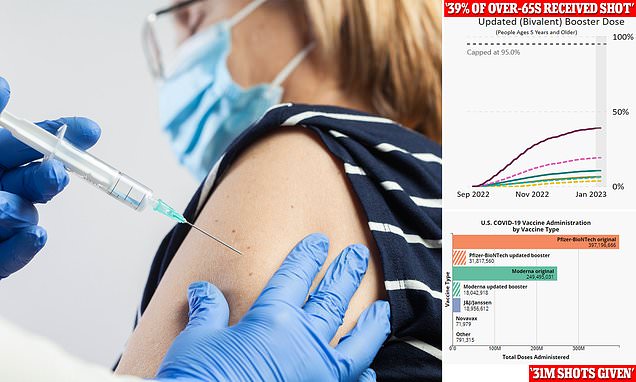 U.S. drugmaker Pfizer Inc and German partner BioNTech’s updated COVID-19 shot could be linked to a type of brain stroke in older adults, the CDC and FDA reported.

The best way to investigate a problem so that nothing is found is to do it themselves, as they have been doing all along. CDC & FDA are industry profit-partners/accomplices, not oversight bodies; VAERS/Vaccine Adverse Event Reporting System is jointly administrated.

Their system isn’t broken, it was designed this way.
No liability, no accountability, astronomical/increasing profits = no concerns

‘Twas ever thus… foxes guarding the henhouse since the beginning…
VAERS Why Did the CDC Silence the Million Dollar Harvard Project Charged With
Upgrading Our Vaccine Safety Surveillance System? – Truth Snitch
and
FOLLOW-UP WITH CDC, FDA, AND HHS REGARDING FIXING VAERS Read more

CDC Knew Its Vaccine Program Was Exposing Children to Dangerous Mercury Levels Since 1999
Children’s Health Defense Says Vaccine Adverse Event Reporting System Disregarded Regulations on Counting Serious Cases for Years, Resulting in a Grossly Inaccurate Safety Assessment
An independent assessment of SAEs based on the correct regulatory definition suggests that VAERS was off by almost 400%. The article explores the implications of this grossly inadequate reporting.

An Untenable Status Quo — Conflicts of Interest Must GoAs the CHD eBook, Conflicts of Interest Undermine Children’s Health, tries to make clear, the passage of the National Childhood Vaccine Injury Act (NCVIA) in 1986 was a watershed event that emboldened vaccine manufacturers and their public- and private-sector accomplices—notably the Centers for Disease Control and Prevention (CDC)—to systematically hide the serious damage caused by vaccines.

U.S. GOV’T LOSES LANDMARK VACCINE LAWSUIT
https://childrenshealthdefense.org/wp-content/uploads/rfk-hhs-stipulated-order-july-2018.pdf
“…Vaccine injury lawyer Robert F. Kennedy Jr., Del Bigtree, producer of the suppressed anti-vaccine documentary, Vaxxed and the Informed Consent Action Network (ICAN) are credited with this victory. They demanded the relevant government documents proving that all federally approved vaccines had been tested for quality over the past 32 years — and there were none….
o This means that the US Department of Health and Human Services and all vaccine makers have been lying to the American people for over 30 years about the effectiveness and safety of vaccines; …
o This means that vaccine makers have been fraudulently exempt from what all other pharmaceutical drug makers have been forced to do concerning biannual recertification for quality and effectiveness — meaning that that their vaccines have never been tested for quality and have had no proven safety or effectiveness for over 30 years;…”

another article accurately states:
“… In the 1970s and 1980s, there were mounting medical reports of vaccine injury occurring in children. The reactions were mild to severe and sometimes deadly. The reactions were often the result of a very reactive vaccine adjuvant that caused severe allergic reaction, seizures, or autoimmune conditions. The number of vaccine injuries was so compelling, the U.S. Congress took up the issue in the mid 1980s.
–Vaccine industry operates above the law, must be held accountable–((they made congress an offer it couldn’t refuse))
In 1986, President Ronald Reagan signed into law the National Childhood Vaccine Injury Act. The law put in motion two important legal precedents. First, it established a government vaccine court to handle specific vaccine injury claims that met certain criteria. This allowed the vaccine industry to continue developing new and existing vaccines, without being sued into bankruptcy. This also protected the vaccine industry from being held criminally liable for manslaughter and causing permanent disability to people. This immunity clause put vaccine companies above the law, allowing the industry to injure people with ineffective products without consequence. Since 1986, this vaccine court has paid out over $4 billion + to select families of vaccine injury, with millions of dollars in settlements added each month. There is currently not enough ((taxpayer, not manufacturer)) money set aside to compensate all victims of vaccine injury, and multiple thousands of claims go ignored every year.
… corrupt precedent also provided the vaccine industry with unlimited opportunities to expand the childhood vaccine schedule, as recommended by the Centers for Disease Control (CDC). After the vaccine industry got legal immunity in 1986, the childhood vaccine schedule ballooned as a result. Emboldened to profit, the vaccine industry pressured the CDC to expand childhood vaccinations to 56 or more doses by the 21st century. As federal authorities approved individual vaccines, one by one, no scientific body or government was studying the effect that multiple and compounding vaccine doses have on developing human beings. (Related: Pfizer is threatening governments around the world and demanding RANSOM to protect against future vaccine injury lawsuits.)
The government has been lying about vaccine safety for over three decadesThe second part of the National Childhood Vaccine Injury Act was a more noble aspect of the law. This part required the vaccine companies to report to the Department of Health and Human Services (HHS) and Congress every two years, documenting vaccine safety studies and quality control improvements to their products. However, when Robert F. Kennedy Jr and Del Bigtree requested that the HHS provide these thirty-two years’ worth of vaccine safety studies, no response was given from the federal government. This prompted Kennedy and Bigtree to file a court order, requesting the documents.
The HHS responded, “The department’s search for records did not locate any records responsive to your request.” This means that HHS has broken the law since 1986 and refuses to hold vaccine companies accountable today. There have been no vaccine safety studies conducted in 32 years! The NIH, the FDA, the mainstream media and the CDC have been lying to the American people for over three decades about vaccine safety, for which there is no documentation.
Any government official who uses their position of authority to coerce or intimidate parents to vaccinate their children must now be held accountable. Any vaccine “mandate” or condition of entry is an act of coercion, with no regard to human rights and with no basis in science. Informed consent is essential to any and all medical interventions, especially vaccinations, which have not been tested for safety and continue to cause health issues in both children and adults.

‘Shocking’ V-Safe Data Confirm COVID Vaccines ‘Dangerous in the Extreme’The Centers for Disease Control and Prevention was forced to release its V-safe database, which revealed 770,000 people required medical care after getting a COVID-19 vaccine and 2.5 million people missed work or school or suffered a serious side effect.

There is literally no end to the collective archived predatory con, fraud & iatrogenesis/iatrogenocide exposure documentation, and it just keeps coming.

“… I investigated the 10 biggest pharmaceutical companies in the world, and found out that their business model fulfills the criteria for organized crime according to US law….”
~ Dr. Peter Gotzsche, founder of the Cochrane Collaboration & Cochrane Database; author Deadly Medicine and Organized Crime (2013 1st ed.)

“The main reason we take so many drugs is that drug companies don’t sell drugs, they sell lies about drugs. This is what makes drugs so different from anything else in life… Virtually everything we know about drugs is what the companies have chosen to tell us and our doctors… the reason patients trust their medicine is that they extrapolate the trust they have in their doctors into the medicines they prescribe….” ~Dr. Peter Gotzsche

Medicine, its practice in general. [1] I was at one time a great lover of the medical profession. . . . I no longer hold that opinion. . . . Doctors have almost unhinged us. . . . I regard the present system as black magic. . . . Hospitals are institutions for propagating sin. Men take less care of their bodies and immorality increases. . . . ignoring the soul, the profession puts men at its mercy and contributes to the diminution of human dignity and self control. . . . I have endeavoured to show that there is no real service of humanity in the profession, and that it is injurious to mankind. . . . I believe that a multiplicity of hospitals is not test of civilization. It is rather a symptom of decay. ~Mahatma Gandhi, The Health Guide, 1965.

mRNA technology is like a volume control that turns up everything in the body, making in a target for disease and death

So really they’re saying let’s investigate something we’re not really concerned about?!

Riiiiight because that’s why things are investigated. One of the worst things that’s spread like wildfire especially these last 3 years is so many people saying outright lies and just plain stupid things and thinking everybody will believe it.

Think for yourselves people!! Don’t let someone else do it for you.