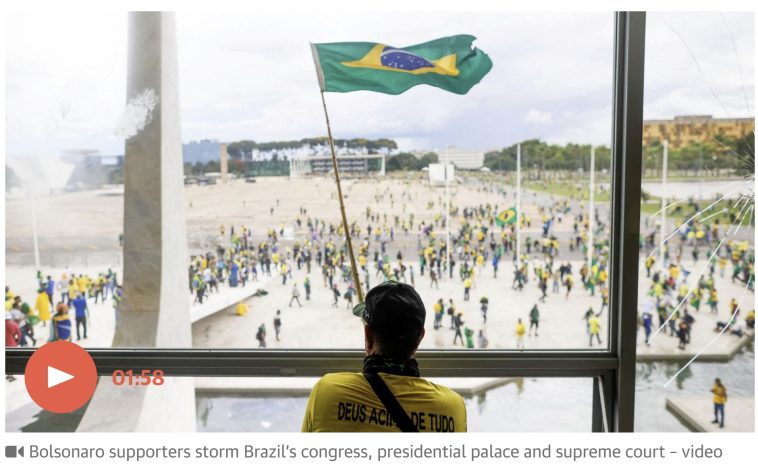 More worldwide political gaslighting – would you look at that “storm” of rioters? Of course, they’re “far-right neo-fascist mobs, vandals, and fanatics, terrorists, etc, etc” who “will be punished.

Article states it was immediately likened to the US Capital incident (I refuse to call it a riot) and, interestingly, there is this quote:

“De Moraes (Supreme Court Justice) wrote that the attacks “could only have happened with the acquiescence, or even direct involvement, of public security and intelligence authorities.”

Lula said capital law enforcement bodies showed “incompetence, bad faith or malice” and promised swift action.” — of course, they are blaming this on the displaced Bolsonaro, who is now in Florida. “Lula was not in Brasília at the time of the attack but he gave an angry speech blaming Bolsonaro for the chaos and promising that ‘anyone involved will be punished’.” – instead of the obvious false flag it is.

Same, exact playbook and we’re all supposed to act like we believe this thin excuse for takeover and crackdowns. Watch for more political prisoners who likely had little to nothing to do with the broken windows and furniture.