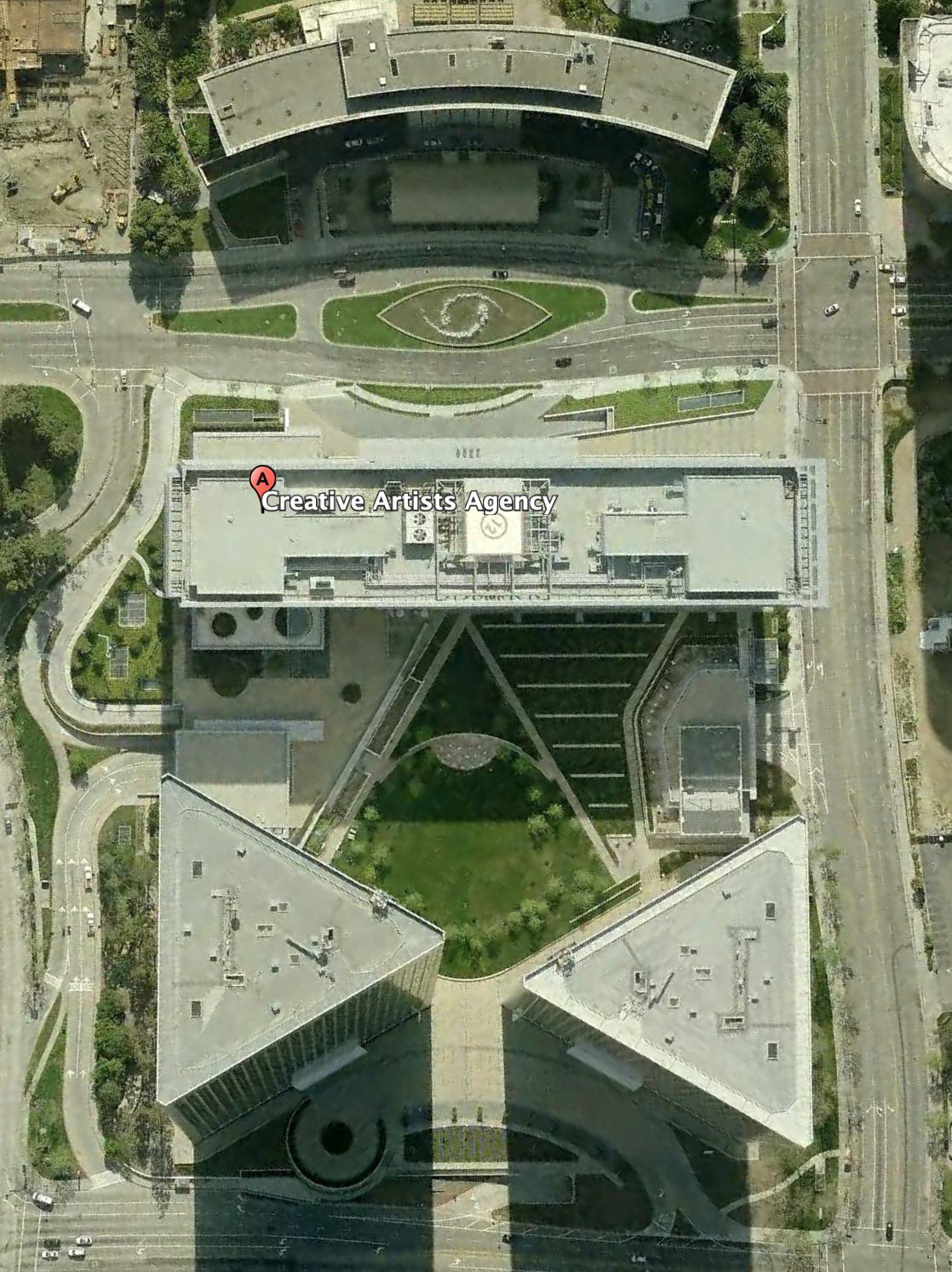 When viewed from above, the CAA (Creative Arts Agency) building in Los Angeles incorporates the ‘one eye’ and Freemasonry symbols into its architecture. The buildings themselves are pyramidal in design. A one eye in pyramid in the lower courtyard and a one eye up in the front. On the bottom it appears to be a chameleon or snake perhaps? If you look at a road map digital veiw of that area it looks like a snake imo. Another side note- This place is on the cross streets of ‘Avenue of the Stars’ and ‘Olympic Blvd.

This place is sometimes referred to as “The Death Star by entertainment professionals.

The CAA, if you remember was In the news in December 2017, there were reports that the agency was actively involved in coverups relating to abuse and harassment by disgraced Miramax executive Harvey Wienstien. Variety, citing a report in NYT reported that at least eight agents knew about the ongoing harassment yet continued to do business with Weinstein, and even sent actresses to meet with him in situations where they might have been vulnerable to his predations. Actress Uma Thurman accused the agency of being connected to Weinstein’s predatory behavior. And In 2005 Courtney Love advised young actresses in an interview, “If Harvey Weinstein invites you to a private party in the Four Seasons, don’t go.” Love later said that she was “banned” by CAA for speaking out about Weinstein.

Lot’s of other crazy news with this place, too much to list here as they represent thousands and thousands of celebrities.

Whether a joke or not, I’ve read that Satan runs the CAA. Everyone who signs with the CAA sells their souls to Satan.

The design of the building across the street (Fairmont Century Plaza) as well as the median of the street it borders (Avenue of the Stars) and the driveway across from it also form an all-seeing eye, like that formed in the UK Supreme Court by the benches. Within the eye of the median is a design that looks sort of like a portal vortex. In the Fairmont Century Plaza courtyard is a statue of a wireframe head called “Laura” by Jaume Plensa. Looks like many of his works feature women with closed eyes or covered eyes or holding a finger to her lips. Others are made of surfaces of messages, while others still look like your monitor is set to the wrong resolution.

The feature below the triangular buildings resembles an Eye of Horus, particularly when combined with the shadow between the buildings.

The CAA building itself has a rectangular hole through its middle, where the point of the pyramid intersects the building, and in line with the gap in the triangular buildings, the Fairmont Century Plaza/Avenue of the Stars eye, and a couple other buildings past there, thus linking them together.

Well would ya look at that!

Good find! It is as clear as day.

Excellent video about the CAA.

Enjoy The Show by Tore Says