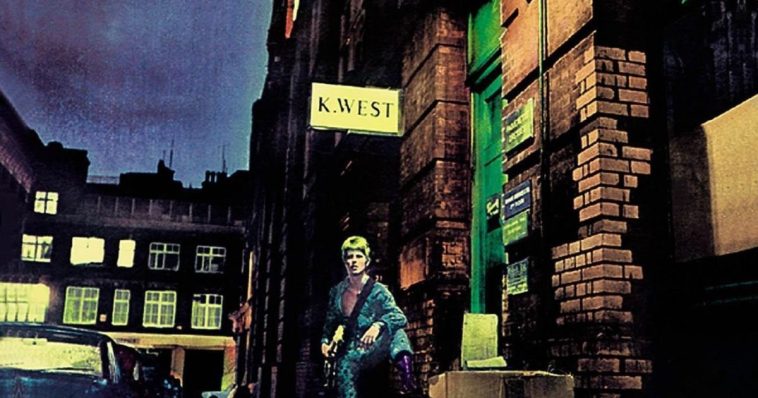 Does it matter that K West appeared on David Bowie’s 1972 album cover for Ziggy Stardust?
In June of 1972, David Bowie released “The Rise and Fall of Ziggy Stardust”and The Spiders from Mars’ and right above Bowie’s head is a sign reading ‘K WEST’-Who cares right?

The first track on the album is entitled ‘Five Years’. Five years to the month after the album was released, a baby was born in Atlanta. He would go on to be a very successful musician. A lot of folks would put this kind of thing down to ‘coincidence’. Who could blame them? That is what we are trained to do from a young age. lgnore patterns and connections. The article sheds more light into this weird rabbit hole.

The name K West is a reference to:

1) Khnum (KAINum) the potter, who is the sun setting in the West.

2) Read right to left is spells צו “Tsew” in Hebrew which means “The Order,” like Skull and Bones and “Enki and The World Order” and is also the name of the Avian Bird Demon called Zu, who is Lucifer, in Sumerian mythology, that stole the tablets of destiny.

3) A Transliteration of the Sumerian word, right to left, of Tsuk, which means “divine vizier.” Now in English spelled Sukkal, these were the lesser earthly companions of divine beings. And so Boeh is fashioning himself the Earthly Vizier of Zu/Lucifer.

4) A play on words in English with Kwest: the search to answer a question.

Would this analysis have any connections to Kanye West himself? I saw that Kanye is a Yoruba name meaning “next in line”. It is also an Igbo name meaning “let’s give”. The name or word Kanye can also be derived from Bantu languages of Southern Africa, South American, North American meaning ‘only once’; ‘only one’ and ‘to shine’. In Zulu and Xhosa, UzuKanye means Ought to Shine.

Yes, they are simply glorifying the same ancient mythology regarding Lucifer’s world order. Kanye West, read Right to Left is Tsew Eynak, written in Hebrew as:

so the name means “The Command of The Son of Kain.”

A couple things to note about the name Enoch:

1) it is written specifically HAN-AK in Hebrew. Han is the same root as Hanas, meaning serpent in ancient Hebrew and still in modern Aramaic and aramaic. (modern they’ve tricked isisraelis by inverting the first to syllables order to Nahas)

2) Hanak is the same as the Greek word αναξ which is used for “commander/warlord/ruler.

4) Hanak read in the reverse direction (left to right in Hebrew)
is Kanah. As in Canaan, as in Canines (dogs), as in Han Caina (China)

Notice that even in subsaharan African language the words all relate to light worship and divine right of rulership. Very typical Luciferian teachings.

KanYe is also itself

so literally “The possessor and murder who is master and commander.”

The West as noted above is related to KAINum (spelled absurdly wrong as Khnum in English main stream of Rgyptian) who is “the potter” mentioned in Mathew 27 and Jeremiah. He is the setting Sun of the west that molds body from clay. This is of course an allegory for dying stars that produce carbon 12, the basis of all organic material and clay.

Theres much more detail on this in Monkeys X. These names appearing in modernity are quite literally bragging about being the serpent seed, the children of Kain, and glorifying Lucifer as their father for whom they do his bidding, as a Sukkal, here on Earth.

All of this, all of it, stretches back unimaginably far into history.

Said “Anak” means tin, and appears in Amos 7:7-7:8 sorely mistranslated in English as Plumb Line (in reference to lead..) it means “Tin” like the Tin Man, and also in reference to tin and copper making bronze, the very very effective metallic killing weapons of the Bronze Age.

I had a feeling a connection with Cain was there