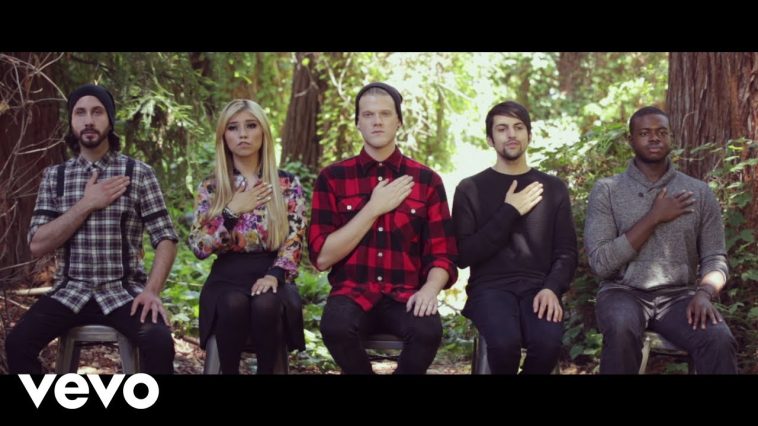 Following the pack (of wolves – the mob) – (sung by Fleet Foxes, the Fanax) all swaddled in their coats (sheep’s clothing) with scarves of red tied round their throats is old allegoric for throats cut (severed from God and so empty puppets, but also men who may never reach to really know God because of a constructed and fortified divide.

…to keep their little heads from falling in the snow (reinforcement this means decapitation, the scarf tied in place and kept there is all that’s holding the illusion together – similarly to the “hidden hand”, but the red slash also graphically alludes to the injury)

And Michael, you would fall (this refers to the archangel and leader of God’s forces) and turn the white snow red as strawberries in the summertime (spilled blood, defeat, overthrow).

This song mocks God and glorifies Luciferian forces as having prevailed against God. And it is offered up to us as part of our “Christian” celebrations….

Definitely with you on the “following the eye” bit. Pretty sure VC has covered these guys a few times in his monthly symbolic pics series.

I missed those, but am not surprised. Their sound is amazing, but it also changed this year into something intermittently gruesome.

Very interesting. I wanted to listen to them about a week ago but this time it felt different. I decided to look up each member separately and things got dark pretty quick. I’ve been wondering about the group’s name as well, if there’s any satanic reference going on there.

Their most recent performance on Today Show, I caught only the audio of on youtube and it’s what I call harmonic discordance. Not every song, but enough of them have been changed in such a way that resonates on a baser level and lends a despairing sadness to the songs which were previously upbeat. It wasn’t enjoyable overall. People were still clapping and cheering and it felt very off to me.

I thought I was the only one who never enjoyed them. I always found them to be a very torturous harmonic group. Amazing how a regular quartet group is enjoyable to listen to and these guys bring negative feelings. Like I said in my comment before. They made me despise the song Mary Did You Know?

I liked them a lot initially, but it didn’t take long to detect the rotten core. I don’t think they went into it with this intent, I believe the industry extracted it in demand from them.
I find it interesting you saw (heard) through them immediately.

I also believe they were corrupted by the industry. And it’s nothing spiritual I felt about not liking them. I just always thought they were annoying.

It’s been the same for me since I first heard them. My family likes them, especially for Christmas stuff, and I hate to be a Grinch… but embracing them never seemed feasible.

The name Pentatonix evokes the pentagram. And that’s interesting about the scarves representing the slit throat. The gesture of throatcutting seems to be very important in Masonry. It means that the initiate accepts that his throat will be slit if he tells the secrets.

And transhumanism.
I was big into speech and drama when I was younger and I recall some of the “old school” ways players used to communicate various taboo concepts, like blood and wounds, etc, on stage before it was considered okay to just slop whatever around. This type of playacting dates back to Shakespearian times and likely earlier.

So, today, the decapitation doesn’t only allude to the physical removal of the head, but also to the “severing” intended via the vaccine symbiote/5g/6g which will effectively remove man’s ability to ever attain spirituality again. He will remain trapped within his baser nature with no hope of reprieve.

This is the first I’ve heard of the severance of man and spirituality, as you define it, by such means… Do you have any resources at hand that would be helpful?

There’s not really a simple explanation or a site I can point you to for confirmation, it is a combination of quotes I have seen from various involved people and the logical outcome of where all this heads.
If you read the Monkeys series here, it will explain a great deal – read the comments as well, as best you can.
I wrote an article here called “Two Arks, right here and now” which goes into a portion of this trap laid out before us. There are many articles written on the dangers of “metaverse” in its various forms, but this one may give you some food for thought: venturebeat.com/virtual/mind-control-the-metaverse-may-be-the-ultimate-tool-of-persuasion/
Once we have: the vaccine symbiote and read/write nanosensors, the 5g/6g influence plus the false immersion of metaverse and complete suppression of “unapproved” thoughts, what has already eluded billions may prove nearly impossible. No one will be able to discern truth from anything anymore and no one will ever again be left alone long enough to ask YHWH.

Thank you! I was just asking so that I’d know how to research this more efficiently; now I know.

Very happy to. I just sometimes fret that I cannot give enough of a nutshell explanation for most to take things seriously. Nothing fits nutshell by design.

Their album covers and tour posters are worth a look at as well. Some subtle symbolism going on in many of them for sure.

It presents itself as a quasi religious song in it’s structure and resonance for sure.

My mom is always listening to their cover of Mary Did You Know? and I completely despise their cover of it. I don’t even know if I can listen to the song in general now. I never even found them to be talented. Just plain annoying and quite torturous to listen too.

What is it that bothers you about it? It was actually a song I enjoyed until a few weeks ago, and now I cannot stand it either. I don’t understand entirely why (I know part of it, but the vehemence is odd).

It use to mainly be because I thought they were very annoying and it’s like I want to keep hitting my head on the table until it’s over since my mom played it a lot. I always have to drown it out with my own music whenever she put it on. But the intent of the song is to put a spotlight on Mary. We also reserved the song for Mary’s month in the Catholic Church when I was a kid and did her worship ritual mass. Catholics will never realize she doesn’t want to be worshipped. Same with her husband Joseph. He wouldn’t want to know Catholics worship him too. The negative feelings may have not been actually from them. It may have been the lyrics. All I think when hearing this is Mary wouldn’t like this song glamorizing her.

Mary worship also: pachamama, queen of heaven, mother earth, virgin mother, immaculate mother in RCC; is nothing more but a shameless effort of trying to “christianize” mystery babylon religion of the false “trinity” that of the ‘FATHER, MOTHER & SON’ designed by Antichrist to obscure the Holy Trinity to be revealed to God’s children (the body of Christ) . I.e. 1 John 5:7 (KJV)
Mary worship is a distortion of the worship of semiramis, her son Tammuz (marduk) and the father Nimrod (other variations: isis, osiris, horus; saturn, ops, jupiter; zeus, venus, hercules etc……………..)
But anyway, it all narrows down to one thing, “demonic worship”.

1 Corinthians 10:19-22 KJV
What say I then? that the idol is any thing, or that which is offered in sacrifice to idols is any thing? [20] But I say, that the things which the Gentiles sacrifice, they sacrifice to devils, and not to God: and I would not that ye should have fellowship with devils. [21] Ye cannot drink the cup of the Lord, and the cup of devils: ye cannot be partakers of the Lord’s table, and of the table of devils. [22] Do we provoke the Lord to jealousy? are we stronger than he?

2 Corinthians 6:15 KJV
And what concord hath Christ with Belial? or what part hath he that believeth with an infidel?

2 Peter 2:1 KJV
But there were false prophets also among the people, even as there shall be false teachers among you, who privily shall bring in damnable heresies, even denying the Lord that bought them, and bring upon themselves swift destruction.

1 Timothy 4:1 KJV
Now the Spirit speaketh expressly, that in the latter times some shall depart from the faith, giving heed to seducing spirits, and doctrines of devils;

Revelation 18:4 KJV
And I heard another voice from heaven, saying, Come out of her, my people, that ye be not partakers of her sins, and that ye receive not of her plagues.

Roman Catholicism is a religious setting by Antichrist. Just as John the baptist was a forerunner for the Messiah, RCC is the forerunner to the rise of Antichrist. She, the w***e of Revelation, is there to prepare the minds and the hearts of men (Jer. 4:22) to welcome and accept the false messiah.

John 10:1-5 KJV
Verily, verily, I say unto you, He that entereth not by the door into the sheepfold, but climbeth up some other way, the same is a thief and a robber. [2] But he that entereth in by the door is the shepherd of the sheep. [3] To him the porter openeth; and the sheep hear his voice: and he calleth his own sheep by name, and leadeth them out. [4] And when he putteth forth his own sheep, he goeth before them, and the sheep follow him: for they know his voice. [5] And a stranger will they not follow, but will flee from him: for they know not the voice of strangers.

Talking to dead people is necromancy which is forbidden in the Bible. Mary was just a human being and is now dead. Therefore, talking or singing to her is a form of black magic, sorcery. Kenny Rodgers and Wynonna Judd famously sang this song. I used to love their version until I learned that it is considered to be sorcery. Likewise, many, many movies show people in graveyards talking to their dead relatives.

I have to come to realize that most of the mainstream content is there to promote Roman Catholicism e.g. Prey for the devil, Exorcist, Mauseu (Mouse Kdrama, the nonsense of seven deadly sins: Please note: there is no big sin or small sin biblically, sin is sin) and soooo…. many programs and musical.

James 2:10 KJV
For whosoever shall keep the whole law, and yet offend in one point, he is guilty of all.

That bums me out as about a week ago one of the members from this group did a verse of the day on the bible app. :/

Whoever claimed he is apparently “in the dark”, could you back it up please? Last time I checked he was a Christian and somewhat vocal about it, but perhaps times have changed or perhaps they haven’t

I’ve been a fan of the original version put out by the Fleet Foxes since its release. Their version feels a bit hollow to me.

“The eye sees only what the mind is prepared to comprehend.” ~ Robertson Davies